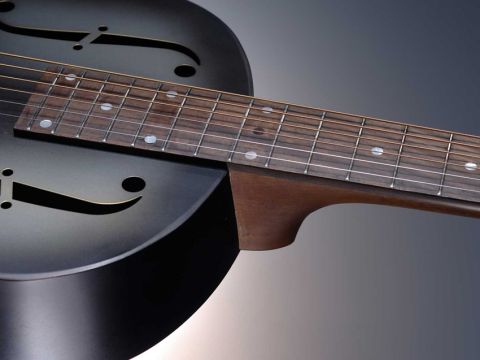 A well made, old-style resonator, with the 'proper' sound, that doesn't cost four figures. We heartily recommend this guitar.

There will be few guitarists even remotely interested in bottleneck and slide styles that haven't come across Michael Messer. One of the UK's (the world's?) foremost exponents of classic slide technique, he has numerous albums under his belt and is also a noted historian and authority on all things resonator.

Now, Messer has put his name to a range of resonator guitars. This is a pretty unusual move because this is no signature model or replica of a rock star's own instrument. Instead, a friend (and now partner in the venture) found a Chinese-made resonator that he thought Messer might like to hear.

"It wasn't the right shape and lacked a few details but the sound, for clearly not a lot of money, was superb," says Messer, who contacted the small Shanghai-based factory and, after numerous e-mails and prototypes, got them to hone their craft into what we see here today: a mini-range of two National-style single-cone resonators.

We have the 'posh' Lightning and the 'dirtier' Blues, based on, but not a replica of, National's Duolian that, back in the thirties, were "cheaply made, rough instruments but amongst some of the best sounding guitars ever built," reckons Messer.

"The whole point of the Duolian was that it was a depression-era guitar made from cheap materials. I think most people overbuild them today. That was the whole point of this project, to get that Duolian vibe, and they certainly weren't all perfectly made."

The Blues is certainly very evocative of a past time, though its tidy steel body has an electric guitar weight and is harder than a wooden acoustic to balance on your leg. The steel is what Messer believes is a medium thickness, "not the lightest or heaviest gauge that National used," and the spray-on finish - a three colour grey 'burst - is actually more reminiscent of the Triolian's finish not the frosted Dupont Duco finish of the Duolian.

The two-piece nato neck is a beautifully big and wide handful; its heel is actually the 'neck stick' that runs right through the centre of the body. An embossed Michael Messer logo looks suitably depression-era and the serial number is stamped at the top of the square slot-head when each guitar is set-up in the UK and logged.

Messer has chosen a 12-fret-to-the-body neck joint, preferring the sound over the added playability of a 14-fret neck, which we might see later on some other instruments.

Click here to hear Michael Messer himself demo the the Blues resonator.

At the heart of the guitar is the large aluminium resonator cone (spun in China) under the 'colander' coverplate. The strings sit on a half rosewood/half maple saddle, which slots into a rosewood 'biscuit' directly in contact with the cone: a mechanical loudspeaker.

Each Messer guitar is fitted with Michael's own-name Newtone strings (0.013-0.056), although you also get a 0.015 for the top-string, as Michael uses himself.

Even from the first strum you hear what caught Messer's original interest. So many low-end resonators sound tinny and metallic, but not this one. It's a beautiful and really full-bodied, growling, reverb-y tone combining almost banjo-like plunk with the sonority of a metal bell. Unique and highly evocative, for such an affordable guitar, the Blues nails it well.

The tuners aren't the most precise we've encountered, which comes into play if you're changing tunings, and the fret ends are a little sharp - less of a problem for slide players - but the bone nut is well cut and standard set-up is relatively high (3mm bass/2.5mm treble at the 12th fret) and tough.

If you're used to this style, however, you'll find that it is spot on; Messer prefers a slightly higher set-up, but then he is a real bluesman!

The best resonator you can buy for under £500? Definitely. Messer's vast experience oozes from this guitar, turning what could be an also-ran into something that, for the most part, looks, feels and sounds like an old National.

There are numerous lower-end resonators out there but none we've encountered that sound this good. A 'guitar shaped object' this is not. Instead it's a serious blues guitar that - as we enter another depression-era - is very well timed. Oh, lordy!