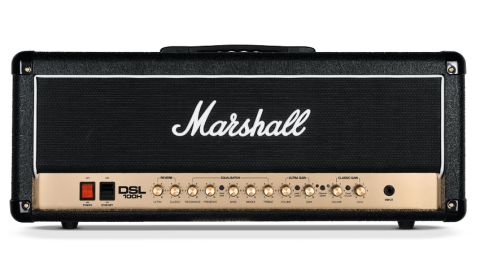 Here's to another 15 years of the DSL!

The great man may have gone, but his legacy in rock 'n' roll continues loud and proud. Over the past year or two, we've seen not one, but three massive signature amps - for Slash, Yngwie Malmsteen and Joe Satriani - and now Marshall has turned its attention to an amp range that for many years has been the cornerstone of the company's catalogue: the JCM2000 Dual Super Lead, or DSL.

Dating back to the late 1990s, the DSLs have been in production ever since, and many people see them as the spiritual successors to the JCM800 and 900 ranges that did so much to define modern rock-guitar tone.

Even though the advanced JVM range has superseded them, for many, the DSL is still the archetypal modern Marshall - but an update was overdue. Well, here it is, and we're reviewing the standard bearer from the new range: the DSL100 head.

Cracking open the box, it's no surprise that the amp draws heavily from the iconic Marshall style; an oversized cabinet, black vinyl, black grille, gold panel, white piping and, of course, the familiar white script logo are all present.

The generous cabinet dimensions contribute to a somewhat larger-than-life presence, but the proportions are solid and balanced. Viewed close up, there are some subtle styling changes compared to the old DSLs.

The vinyl seems thinner and shinier than normal, the anodised gold panel has a smoother, more reflective sheen, and screws have replaced the gold studs that secure the corner protectors. There's also a smart, comfortable new carry handle with flush-end caps.

On the small info card stapled to the underside of the head, the words 'Made in Vietnam' are easy to miss. It's a shame, but perhaps inevitable that offshore manufacturing has reached further up the Marshall catalogue than before in order to keep prices competitive. MDF also replaces plywood for the new cabinet and there's a substantial pressed and folded steel chassis, with integral ribs to reduce flex.

As you'd expect, the electronics are almost all PCB-mounted, with one large board supporting preamp, power amp and power supply components, while smaller boards support the input jack, rear-panel jacks and the digital reverb, which replaces the original spring units.

The board quality is typical Marshall, with through-plating, liberal use of metal film resistors to reduce hiss, and solid metal standoffs to keep everything in place. Interestingly, the preamp valves are board-mounted, but the output valves are hand-wired.

We've grown used to seeing amps at all price brackets mount valve bases on PCBs today. In the early days, this was where a lot of reliability issues cropped up, as cheaper boards couldn't take repeated hot/cold cycling, and tracks would often break down. But most modern PCB materials are more resistant to this.

However, for areas that take serious heat, such as output-valve pin contacts, hand-wiring is still more reliable in the end. Having said that, the wiring and soldering on this sample isn't quite up to the high standards we'd normally associate with Marshall. Hopefully, this area will be watched carefully as production ramps up. Overall, though, the amp is certainly worthy of the Marshall logo and should handle non-stop gigging without any issues.

As the name suggests, the DSL is a two-channel design, with two pairs of gain and volume controls called Classic Gain and Ultra Gain, feeding a shared bass, mid and treble EQ. The EQ's range is widened by a button called Tone Shift, which reduces the midrange for a flatter response and smoother attack.

Further enhancements on the head include two modes on each channel, switching between clean or crunch, and Lead 1 or a more gained-out Lead 2. There's also a resonance control next to the presence control to tailor the power amp's low-frequency response, as well as separate reverb knob that works for both channels.

On the rear panel, there's a trio of fixed-impedance output jacks, with pentode/triode switching to reduce output power roughly by half. The triode option also reduces high-frequency response for a warmer feel. There's also a colour-coded footswitch jack and a fixed-level series effects loop with an on/off switch.

We tried the DSL with a variety of guitars, including an old Strat with regular output Duncan Alnico Pros and a PAF-loaded Gibson Les Paul Standard. The amp powered up smoothly, with almost no hum, and just a little hiss.

Using a Vintage 30-loaded 2x12 cab to test the head, the DSL100's clean channel is brash and punchy, in keeping with Marshall clean channels of yesteryear, with a powerful treble and a peaky, aggressive midrange that's mostly tamed by the tone-shift button.

At the other end of the gain spectrum, the super-saturated Lead 2 sound provides practically endless sustain and a heavy overdrive that's more effective for single notes than powerchords.

The two voicings in between - the Crunch and Lead 1 options - are far more versatile and pleasing to use, the crunch voice is great for blues and classic rock with a Strat or Les Paul, while the Lead 1 voice sings and responds very musically, with all the right Marshall ingredients.

The new digital reverb stays smooth and warm, tailing off nicely as the levels are raised. One part of Marshall's heritage is assured - it's a seriously loud beast and will rattle windows when turned up to what Billy Gibbons calls 'Patent Pending' levels.

We think this new DSL should receive a welcome from many Marshall fans, with the right looks and sounds to satisfy any serious rocker. The digital reverb is a step in the right direction, and suggests that a DSL FX model may be joining the line-up.

Traditionalists may be a little unhappy with the offshore origin and MDF cab, but the pricing will offset those grumbles. Affordable it may be, but there's plenty of stiff competition for the DSL from home and abroad, with lots of amps offering similar features for the money. One feature they can't offer us, however, is that famous white script logo. If you're stepping up to your first Marshall, then these new DSLs won't disappoint.