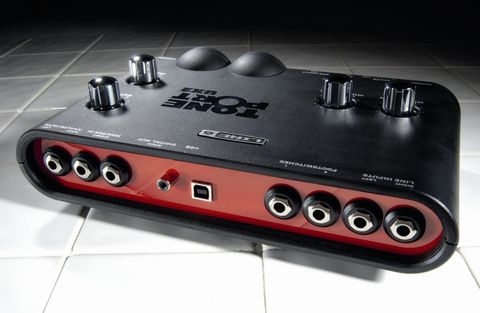 The TonePort UX2, although light in weight, could be a little more portable. It is, however, a versatile interface for guitar and microphone signals, equipped with a large range of Line 6 quality sounds that cover just about all the bases when it comes to recording.

Line 6 has a long history in amp simulation software, starting with the acclaimed Amp Farm for Pro Tools systems.

And with the GuitarPort and the USB connections on some of the POD range, they have been making the interfacing between guitar and computer more convenient. TonePort may be Line 6´s most comprehensive integration of guitar and computer to date. It is a well-equipped USB audio interface coupled with a set of amp and effect models in the form of the GearBox software.

While TonePort is indeed an audio interface and will happily play back audio from your computer, it will only put audio into the computer if the included GearBox software is active. GearBox can stand alone as a source of sounds for practising but can also be used in recording as the ‘front end´ for any sequencer. You play through GearBox and the sounds are recorded on your sequencer, rather like the insert effects used in a portable hardware studio. Communication between TonePort and computer is via USB, but the hardware can also output the GearBox sounds through a pair of analogue outputs to a mixing desk or hardware recorder.

TonePort can handle guitar, microphone or line level signals through its various inputs - guitar and vocals can be recorded at the same time and routed to different tracks on your sequencer, as there are two internal stereo sends. A stereo monitor input jack lets you monitor external sounds alongside the computer audio, while adding footswitches enables you to control the various TonePort and sequencer functions.

The GearBox software features 16 classic and modern guitar amplifiers and 24 guitar speaker cabinet models from the PODxt, and five bass amp and cab models from the Bass PODxt. There are also 24 stompbox and studio effects, plus six virtual studio preamps for recording vocals. The whole package also comes bundled with a special edition of Ableton Live Lite recording software.

Installing the software and getting going with TonePort is a simple operation that takes a matter of minutes. When you fire up Gearbox you'll be given plenty of help, with a dialogue box popping up to ask whether you want help setting it up, and taking you to a well laid-out electronic manual. There´s loads of functionality here, with plenty of options for recording various signals with direct no-latency monitoring of the affected sound.

As far as that sound goes, anyone familiar with POD will instantly recognise the collection of amp models and effects here. With the Fender, Vox, Marshall and other emulations alongside Line 6´s own creations it is possible to dial in just about any guitar tone that you want either for recording or practice. A large number of presets in various categories gives you a whole bunch of guitar and bass sounds for instant use or as a basis for editing.

For recording vocals or anything else through the mic inputs, the included preamp models that are based on Neve, Avalon and other high-end designs, coupled with a modelled LA-2A compressor, add a bit of class to the raw mic signal and make a valuable contribution to the recorded sound.

The overall impression is of a versatile system for recording any type of musical signal into your computer and getting the exact sound that you want. Alternatively, you may wish to think of it as a software version of a POD, resident in your computer.