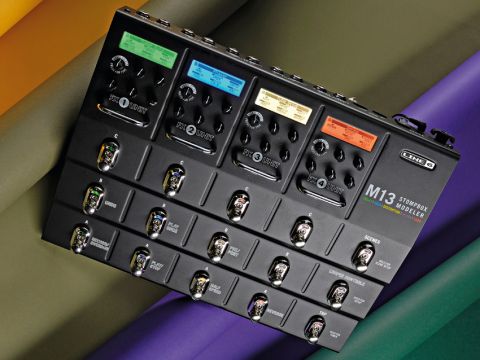 Not for the first time Line 6 leads the way with a great sounding FX system centred around its well-known stompbox modellers: the multistomp is born!

In simple terms, the M13 contains a chain of four stompbox modellers, featuring sounds from the company's earlier (and hugely successful) four-switch stompboxes, plus the Verbzilla from the Tonecore range. Each modeller has three memories, equating to the three footswitches under each control panel, so you can store three sounds for each of the modellers.

Now, the really good bit is that each modeller can run any of the M13's five main effects types: distortion, delay, modulation, filter or reverb. This means that the three memories for a given modeller don't have to be filled with variations on the same sound; you can put effects where you want them in the signal chain, and if you want four different delays running simultaneously, that's fine.

To avoid confusion, the five effect types are colour-coded, so the backlight of the display and the LED near the currently active footswitch will instantly tell you what type of effect is running in each modeller. Speaking of the displays, they're quite small, so if you're using the M13 for live performance you're not really going to see much more than the colour unless you crouch down.

Below the LCD screen, each modeller has its own set of six controls, five of which vary their functions according to the particular effect in use. The sixth control is used for setting the effect; you push it to select from the five effect types available, then you can rotate it to select the desired effect model.

So far, so good, but have we really gained all that much over previous products? Well, with the scenes footswitch, we certainly have. Pressing this switch changes the whole display, showing 12 'scenes', which can be selected with the main modeller footswitches. Each scene is a completely new configuration of the four modellers, each with their three possible uses, so you shouldn't run out of possibilities.

Saving your sounds is easy; in fact there's no need to physically save anything, as the M13 keeps track of the last adjustment you made on every module, from one scene to the next. However, if you'd prefer not to have the M13 constantly overwriting previous settings, you can switch it to the 'manual save' mode.

Apart from the scenes switch, there are two more function switches: one covers tap tempo for all delay effects and a number of modulation effects, while the other turns on the looper. The maximum loop storage time is 28 seconds (in mono) and recorded loops can be played back at half-speed or in reverse.

The undo switch erases the most recent overdub, leaving your previous work intact - a particularly useful function if you've just spent ages building up a beautiful texture, only to hit the wrong chord on the last pass.

You can also adjust the level of the looped parts so that previously recorded layers gradually fade in volume, and the looper can be placed before or after the effects modules in the signal chain. Even when you're using most of the footswitches for the looper, you still have access to whichever effects are currently active.

But enough (for now) of the clever stuff inside the box, let's take a look around the back, where the selection of inputs and outputs is impressively 'professional'. There are stereo outputs for taking advantage of the various stereo reverb, delay and modulation effects and, more unusually, stereo inputs as well.

These aren't much use for guitar, but open up the possibility of using the M13 with other gear. You can do all the usual data storage via MIDI, as well as remotely controlling scene and FX changes and operating the looper.

Unusually for an all-in-one multi-FX unit, the M13 has a stereo effects loop. Even better, you can position the loop where you want in the signal chain, opening up a huge range of connection possibilities.

For instance, you could connect it so that modellers one and two would go to your amp's front input (for distortion and wah effects) with modellers three and four going into your amp's effects loop (for modulation and delay/reverb). Obviously, you don't have to go to those lengths; you could easily just use the effects loop to add a couple of cherished stompboxes to the M13's signal chain.

Hear Guitarist's Simon Bradley put the M13 through its paces in the following examples:

After all these years of POD-ism, it seems strange to be unpacking a new Line 6 product and not plugging it straight into a mixing desk. However, the M13 is a stompbox modeller, so it's back to the amp - how retro.

The M13 might have fewer effects overall than the PODxt and other multi-FX units, but it still has plenty to offer. To give you a random sample, there are eight types of fuzz (seven of which are models of vintage classics), three types of tape echo, three phasers and a number of more outlandish effects based on guitar synths, filters and voice boxes.

It's instantly apparent that the M13 has been created primarily for use with guitar amps rather than line-level connections; the sounds have a crisp 3D quality that is often lost when you plug modelling units into guitar amps.

The reverbs, in particular, are crisp and detailed, even in mono through a small valve amp. The factory preset scenes give a good idea of what the unit can do, showing that you can easily have multiple instances of the same effect type in a chain. Four delay pedals in series, anyone?

The one thing we missed at this point was a proper master volume control; it'd be nice to be able to adjust the overall output from the M13, rather than the amp (which may have to be set at a particular gain level to maximise clean output, for instance).

Another usage may be dependent on environment: when a particular footswitch is not in use, its LED indicator still retains the colour of the selected effect type. Now, these LEDs are quite reflective, so if they catch the light, it can be difficult to see which of a modeller's three footswitches is active. We tested the M13 on a bright day, and the sunlight coming through the window made it very difficult to tell. Perhaps the LEDs need to be a bit brighter?

Apart from these two issues, we had a ball with the M13's sounds. The vintage fuzz and overdrive sounds are very impressive, and don't seem to suffer from the overgenerous bottom-end that some people dislike about the Line 6 amp modellers.

Some of the filter effects can generate some dramatic spikes in level, so you do have to be quite careful with your choice of core amp sound if you want to avoid necessary and unwanted distortion.

The looper is another impressive feature, and is easily one of the most comprehensive loopers we've seen built into a multi-effects unit. The real luxury comes from having so many footswitches available.

Despite the mono-only operation, the sound quality is really very good, and the option to reduce the level of previous layers is particularly useful, providing some extra headroom when your loops become quite dense.

Minor interface issues aside, the M13 is a pleasure to use. Getting it up and running possibly isn't quite as intuitive as with many of the standard patch-based multi-effects units (yes, we had to consult the manual) but then this isn't like those units.

Thanks to the usual well-written Line 6 manual, though, you'll soon adapt to the M13 way of thinking. Yes, those are stompboxes. Yes, they can be whatever stompboxes you want them to be, and yes, you can have three goes at each one. Oh, and you can then start from scratch without losing your original settings… 12 times over!

At just a shade under £400, it's going to be out of the range of the sort of people who buy DigiTech RP or BOSS ME units, but for gigging players struggling with an ever more complicated collection of single-sound pedals, it's a must-try. The M13 is really quite unlike anything else on the market today.