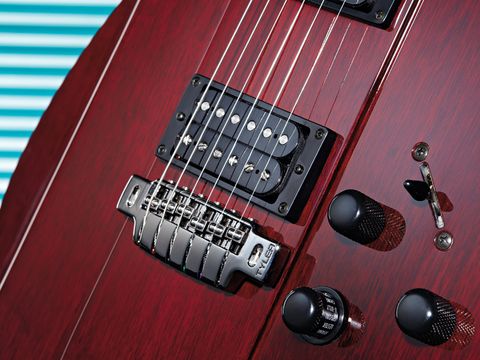 The JTV89's racy looks, slim neck profile and full two-octave fingerboard mean there really is a Variax to suit every player now.

Say hello to the 'metal' Variax: its reverse headstock is as evocative of the late '80s as big girl's blouses in spandex and foil-wrapped root vegetables.

Talking about packing, the JTV89 has a mahogany body with a stepped Firebird-esque top and a comfort-contoured back to accommodate any midriff; even if you're not quite as snake-hipped as you were back in the day. The three-piece maple neck is bolted to the body's rounded heel with big recessed screws.

The 89 has the slimmer Fast 'N' Flat Tyler neck profile with more of an '80s Charvel vibe than the beefy articles on the JTV59 and 69. Again, the rosewood fingerboard has a 305mm radius but the 89 has two more jumbo frets than its brothers.

Like the JTV69, the top nut slots on the 89 are a little high. A little bit more attention to detail makes all the difference.

The JTV89 shares the same wraparound bridge as the JTV59, with the LR Baggs Radiance Hex piezo circuitry built into the saddles that feed the Variax. In now-classic JTV style there's a pair of alnico humbuckers with a master volume and tone and modern switching in attendance.

Standard tuning, drop D and baritone are still onboard, but other tunings have been replaced with metal stuff such as drop C. Of course, you can customise the alternate tunings so it doesn't really matter what the factory settings are.

Getting to grips with a Variax is pretty intuitive. That's one of the reasons the technology has survived the past 10 years: it's easier to use than the competition.

And it sounds great too. We raved about the improvement in the sounds of the next generation Variax when we tried the US JTV69 back in the day, and obviously, with the Korean models carrying the same brilliant seed we're just as impressed. In a way we're even more blown away given the substantial difference in price with these JTVs and the American jobs.

You'll probably have to take some of the Variax modelling sounds at face value. While the Strat, Les Paul and banjo models are easy to place, some of us won't know what the neck pickup on a 1968 Fender Telecaster Thinline or 1976 Gibson Firebird V is supposed to sound like. The same applies to the subtle difference between a 1959 Martin D-28 and a 1967 Martin 0-18.

In those cases you have to enjoy the sounds for what they are; appreciate how they sound in the mix. If the '59 Strat doesn't work, try the fatter-sounding Danelectro 3021 modelled with both pickups engaged.

We do find the 12-string and detuned settings still sound a bit synthetic here but they are dramatically improved in a mix. The acoustic sounds benefit from the sympathetic frequency range of an acoustic guitar amp or PA system.

The banjo model is as brilliant as the Coral sitar is bonkers. If the closest you've ever got to a sitar is having fret buzz on your guitar then you're in for a treat.

Yep, these Korean-made JTVs were worth the wait, with bells on. While the three new designs mean there really is a Variax for everyone, that doesn't mean the target market has changed.

The Variax has always been an indispensable tool for the right player. That means studio and club guitarists looking for instant access to myriad tones and alternate tunings.

A face-lift and magnetic pickups can't really change an instrument's demographic. We reckon that many existing Variax fans will upgrade to the Korean models, but the JTVs prove the Variax concept has not only stood the test of time, it's looking good for another decade at the top.