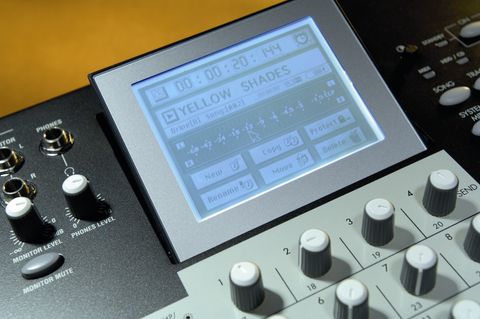 At the price of £999 for a full 32 tracks, as well as the rest of the facilities on offer here, the D3200 represents an amazing deal for a machine that is equally at home either recording a whole band live or used at home for quality demos or even release quality CDs.

Korg claims the D3200 is the first 32-track digital recording studio designed to deliver professional quality at an affordable price. Affordable? Well, just under a grand is a lot of money but for a 32-track machine it´s an incredible price.

Functionally laid out with a small but multi-angled display, the D3200 has a reasonably uncluttered front panel but has a couple of unique operational features in the Knob Matrix and ClickPoint. The former is a set of 16 ‘soft´ knobs in a 4 x 4 array below the display that correspond to and alter whatever set of parameters is laid out on the screen, while the latter fulfils a similar function to a mouse. It´s basically a trackball you can use to point at anything on the display then select the item with a press of its central button.

The D3200 can record audio at the standard CD quality of 16-bit/44.1kHz but also at 48kHz. In addition, 24-bit recording is possible at both rates. There are 12 analogue inputs and you can record through all of those simultaneously at both 16- and 24-bit, but at 16-bit you can also record through the S/PDIF stereo digital input and record the internal stereo drum track at the same time. The full 32-track capability is only available at 16-bit though, so you halve the track count to 16 when operating at 24-bit. Each of the 32 tracks has eight allied virtual tracks, making a total of 272 - so there is plenty of space to store alternative takes on the built-in 40Gb hard drive, which has overall capacity for a little under 120 hours of single track audio.

The first input channel on the D3200 is equipped with a Hi-Z guitar input for plugging straight in and, as might be expected from Korg, there are several insert effects that can be applied here to get a fully produced guitar sound recorded. The family of effects will be familiar to anyone aware of the REMS modelling technology used in the Pandora units and others, with lifelike combined amp/speaker/effects sounds covering a range of guitar styles. If you, say, need a little more gain from any of the presets, editing the effects programs exactly to taste is swiftly carried out using the Knob Matrix. Other guitarist-related features are a built-in tuner and Korg´s various hands-free recording modes including footswitching, programming automatic punch-in points, and the cool ‘Trigger´ mode; where the recorder drops into record as soon as you pick a note.

Rhythm programming takes an entirely new approach with the D3200 via a feature that Korg calls Session Drums. This is a pattern-based facility with 756 drum patterns covering all genres of music available in the onboard memory. Patterns can be chained together to make an original foundation for a song in the normal way but the unique feature of Session Drums is the degree of interactivity afforded to the user.

The Knob Matrix is set up so a bunch of the knobs control the volume of each drum in a pattern allowing you to, for example, reduce the level of the snare or even remove it altogether. Other knobs let you organically tweak the pattern to change the accents, give it more of a shuffle feel or make it less regimented and more human. A variety of digital editing functions are available, and at mixdown there are comprehensive EQ facilities on every channel plus two send and return effects for adding reverb and delay. Insert effects can also be used on a number of channels. In fact, a total of 11 effects - controlled via the Knob Matrix - can be used simultaneously as insert effects, send and return effects and a final mastering effect for the stereo mix.

Automation is available to ease the mixing process with recording and playback of some fader, pan and other settings. Up to 100 scene memories with fader, pan, EQ and effects data can also be recalled as a song plays to provide more detailed automation. Mixer parameters may also be controlled via MIDI. The finished mix is recorded on to a separate stereo master track. Audio CDs can then be burned using the internal CD-RW drive. In addition there´s a USB 2.0 connection to back data up to a computer.

While many of its front panel operations are the same as on other multitrackers, the D3200´s Knob Matrix and ClickPoint set it apart in operational terms. The Knob Matrix is great for instant tweaks and the ClickPoint is a definite improvement over a standard four-way cursor in the way you can move it in all directions to any point on the display. It is, however, a bit fiddly to use until you get accustomed to it.

Overall ease of use is not bad at all - there are a lot of facilities onboard but operation is largely intuitive and soon becomes habit. The small display leaves something to be desired but is clear enough if you are right on top of it, and to be fair, it is one of the few compromises that have had to be made for the low asking price. The drum facility has a bunch of good sounds and is easy enough to use. Patterns are logically categorised so you can easily find what you want.

You can´t write original patterns from scratch like on some multitrackers but there are so many kits and patterns on offer - plus all the tweaking options available via the Knob Matrix - that it is possible to put together a reasonably original drum track for most eventualities. There is plenty here that can be inspirational in the songwriting process too and also great for practising - single patterns can be set to play continuously while you dial up an appropriate guitar sound and jam over the top. Those guitar sounds are really rather good and there would be little need to have to use an external amp simulation processor as a useful range of tones spanning the last 50 years are all on tap.

If you have enough mics, the 12-track simultaneous recording makes it possible to record a live band with a fully mic´d drum kit and there are enough facilities onboard the D3200 to edit the audio, mix it and sequence it for a credible live album. Alternatively, anyone constructing a recording one track at a time could build up some massive arrangements without having to bounce tracks. Overall, the D3200 has an impressive versatility that lends itself to tackling such disparate tasks.