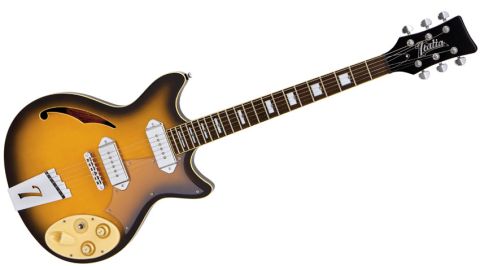 Since 2000, Italia Guitars has allowed British guitar design mainstay Trev Wilkinson to get creative and explore the more esoteric corners of 50s and 60s guitar manufacture for inspiration.

Launched earlier this year, the models we see before us is representative of the Italia brand at its most traditional in aesthetic terms. Also available in a more flamboyant cream finish, our Fiorano Standard is relatively demure in Tobacco Sunburst.

Unlike a Gibson-style semi, the Fiorano's predominantly hollow body is fashioned from mahogany, but is carved to retain a supporting block beneath the bridge, while the Wilkinson W90 pickups are screwed into the spruce laminate top, but are not height-adjustable other than via the individual pole pieces.

What is height and angle adjustable is the cream plastic control plate, which is held in place by four sprung screws, allowing you to angle it slightly if you so wish.

With a 635mm (25-inch) scale length - used by brands as disparate as Danelectro and PRS, sitting between traditional Gibson 628mm (24.75-inch) and Fender 648mm (25.5-inch) territory - the Fiorano has less of the banjo-like acoustic plonkiness of an ES-335, but there's clearly plenty of Epiphone Casino in its DNA, despite the guitar's more compact dimensions.

The guitar's maple neck is a nice, chunky palmful. The quality of the finish is decent, but close scrutiny reveals several areas in which the binding could have been scraped more cleanly around the fretboard and f-hole edges. Time to plug in...

Although P-90 pickups are most readily associated with a wiry snarl, in an Epiphone Casino the hollow construction tends to contribute to an amplified voice with much more warmth and midrange and a slightly attenuated high end. Much of this holds true with the Fiorano, and its more robust construction proves to be less of a feedback trap than a full-sized hollowbody played at volume.

The middle setting is a great voice for retro rock 'n' roll and R&B rhythm guitar (think Lennon on Get Back or Come Together, or Brian Jones-era Stones), but add a little more crunch and lashings of spring reverb, and all three pickup selections excel for stinging, expressive blues-rock with a serious dose of 1960s authenticity. Wind up the wick even further, and raucous garage and indie-rock sounds are available in abundance. Highly enjoyable stuff.

Although it's obvious that the design process at Italia is imbued with a magpie-like spirit, this guitar has plenty of its own personality and an array of sounds that is excellent for the money.

The Fiorano is the kind of guitar that makes you want to plug into a 60s valve amp, turn up the reverb, dig in and grin. It's unapologetically retro, but then again, so are plenty of us...