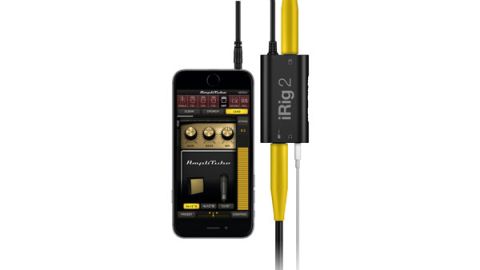 When IK Multimedia's original iRig was introduced in 2010, it was one of the first interfaces to allow guitar players to plug into an iOS device, connecting via the iPhone or iPad's headphone socket and offering its own mini-jack headphone socket for monitoring.

This new version still plugs into the headphone socket of your device (iPhone, iPad, iPod touch, Mac or Samsung Professional Audio compatible Android device) and offers its own headphone socket, but it adds a useful full-size jack output complete with an FX/Thru switch that lets you select the dry sound or the sound through your app to send to an amp, monitoring system or maybe a tuner.

Also new is a knob to control input gain, plus a belt clip and Velcro loop so that you can attach the iRig 2 to a microphone stand.

A plug-in-and-play device, the iRig 2 is easy to use. We tried it with the included AmpliTube Free software, but also several other apps including GarageBand and BIAS.

Overall, it works well at getting sound in and out of your device, but you have to be a little careful when using high-gain amp sim apps because it's easy to conjure up howl-around feedback.

You won't get quite the quality of sound that you would from an interface that doesn't plug into the headphone jack (such as IK's own £89 iRig HD), but this is a decent budget buy.