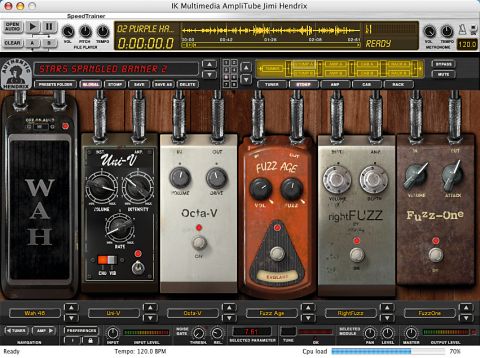 We miss that delay but AmpliTube Jimi Hendrix Edition is otherwise an excellent package. It may even appeal to a wider audience than just Jimi freaks.

For over 40 years, anyone with a guitar has been trying to emulate Jimi Hendrix to some degree. IK Multimedia has just made it a whole lot easier, in software form.

AmpliTube Jimi Hendrix, a cooperative effort between IK Multimedia and Authentic Hendrix, is a specialised version of the AmpliTube 2 software. It features a selection of modelled vintage stompboxes, amp heads and cabinets as used by Jimi, most of them not found in the current version of AmpliTube 2. Owners of AmpliTube 2 can purchase AJH for a crossgrade price but will not be able to incorporate the JH models into their main AmpliTube rig until a forthcoming software update appears.

AJH features one Marshall and three Fender amps, wah, Univibe, Octavia and tremolo effects plus five fuzzboxes. Seven cabinets can be mic´d with one of five virtual mics and there are four studio effects to complete the sound. As with all software amp emulation programs there are a bunch of presets available but these ones are very different from most. As well as a bunch of generic presets based around particular gear combinations, you can not only call up the sound for a specific track on a Hendrix album but in most cases you have choices of sounds for particular track sections (intro, solo, verse rhythm etc) and all the songs from the first three Experience albums are included here. At present there are no plans to create any presets from posthumous releases or live recordings. One ‘live´ preset is included, however, and that´s The Star Spangled Banner from Jimi´s infamous Woodstock performance.

Like AmpliTube 2, AJH can be used as a plug-in or in standalone mode where you can take advantage of the built-in SpeedTrainer phrase training facility - import some Jimi tracks and you can play along.

There may be a smaller number of models available here than in AmpliTube 2 but what there is hits the spot with excellent attention to detail. There are some nicely authentic and very playable tones here with that selection of four amps providing in particular many shades of clean tone between them but breaking up nicely when driven.

The different character of each of the fuzzboxes has been accurately captured and the Univibe sounds great, with the same characteristic phasey throb as the original and an authentically graduated set of controls to dial in the sound. Likewise the wah is one of the best modelled examples we have heard - although trying to manipulate it with the mouse while playing is impossible! With the program working as a plug-in it can be controlled via MIDI, but in standalone mode you´d need IK´s Stomp IO pedalboard (not yet available!).

Okay, it might be stamped with the Hendrix name but in reality it is a versatile rig where you can dial in plenty of other sounds, not least those of grungy rockers who thrive on having a bunch of fuzzboxes in series - you can have five different models in a line here for some serious mayhem.

Back to JH though, and the fact that we are presented with presets for specific sections of album tracks means that direct comparisons with the recordings are possible - talent and original sixties Strat notwithstanding!

Strat plugged in, we had a crack alongside the original recordings and in most cases the sounds here come pretty darn close to what you hear on record. But they are not so close that you can´t improve matters in some instances by a little bit of tweaking to match the guitar you are using. One example is in the Purple Haze intro where the preset sounds much too clean to our ears, but improves by upping the gain on the fuzzbox model. Of course a lot of this depends on how you attack the guitar - that old adage about the sound being in the hands is true but if we can´t have Jimi´s hands this software does a pretty good job of providing the rest.

One thing that would have added more authenticity to some of the presets based on the recordings (and general versatility all round) would have been some more studio effects in the set-up. While Hendrix´s sound began with the amps, speakers, effects and microphones modelled here, much of what you finally hear on record owes a lot to the effects added in the studio, some of which are sadly lacking here. We get the basic compression, EQ and reverb effects that every studio has, plus a simulated Leslie cabinet, but none of the tape-based effects that Eddie Kramer manipulated so well.

How difficult would it have been to include a tape delay simulation here? There are obvious delay sounds in many of Jimi´s recordings. And while the Univibe does a phasing effect, it is different from the phasing produced by manipulating the tape reel flanges clearly heard in tracks like House Burning Down. A missed opportunity, especially since AmpliTube 2 has a digital delay and flanger in the rack that could perhaps be adapted. Apparently IK does intend to add processors in the future…

Nevertheless, as it stands this package still has the basic building blocks to create a whole range of Hendrix-like sounds plus many more that wouldn´t disgrace the recordings of contemporary players.