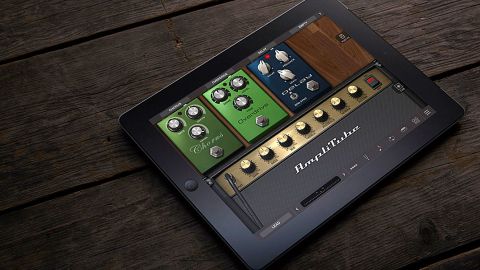 AmpliTube on iOS remains a useful resource for guitarists.

IK Multimedia's AmpliTube for iPhone and iPad has reached Version 4 (a free upgrade for current users), and in doing so has not only acquired an updated interface with streamlined navigation but also features improved DSP, giving it the same sound quality as the AmpliTube 3 Custom Shop desktop version.

The tweaks under the hood include an increase in the number of stompboxes in the rig to six (four in front of the amp and two after it), plus new features that are available as in-app purchases.

With its initial five amps and cabs, and 11 effects, there's plenty here to create a wide range of very playable sounds as well as a tuner, metronome, song player and a single track recorder.

Everything else - additional amp and effects models, multitrack recorder, loop drummer, and so on - are in-app purchases. The new addition in this update is Cab Room, which allows more sonic options with cabinet mic'ing in 3D using up to two mics, a set of 16 mics to take advantage of the facility, and a looper capable of up to four loops at a time.