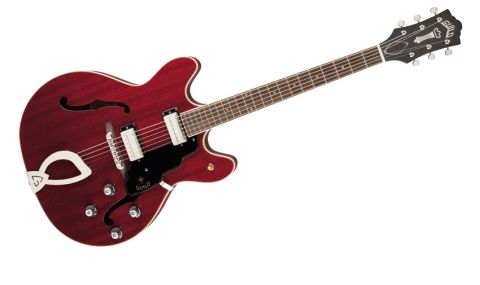 A grand to spend? Put this straight at the top of your double-cut semi shopping list.

Alongside the top dollar US-made American Patriarch Series, NAMM 2013 saw Guild launch the Newark St Collection: eight classic Guild models from the 1950s and 60s (including this here Starfire IV) reissued under a banner inspired by the Hoboken, New Jersey location of the company's factory before the whole operation was sold to the Avnet Corporation and relocated to Rhode Island in 1966.

Although the Newark St Collection is manufactured in Korea, some 7,000 miles away from the address that gave it its name, a real effort has been made to get these guitars right when it comes to balancing vintage accuracy, the demands of modern players and the need to work to a price.

Fender's Vice President of Product Marketing, Mike Lewis - a Guild owner himself in the 60s - masterminded the selection of a range of eight instruments that represent some of the most popular and sought-after guitars that Guild ever built.

The Starfire IV is a true child of the mid 1960s built for free love, or more accurately, freedom from unwanted feedback and single-coil hum.

An obvious attempt to wolf down a slice of the ES-335 market, Guild's double-cut semi does bring some of its own identity to the table, including a laminated mahogany - rather than Gibson's favoured maple - top, back and sides with a solid spruce centre-block.

The Starfire IV is no chunkier than many modern ES-335s, despite the additional weight of mahogany. The floating bridge is a bit of an issue; anyone who might reasonably plan to use this instrument for rock in a live environment is strongly advised to make their bridge secure at the earliest opportunity.

The Starfire's tuning stability is fairly impressive given the aged design but it only takes one over- excited downstroke to make contact with the bridge to send it sliding out of alignment. All that said, for this price, a bridge that's a flight risk is actually the only thing stopping this guitar being damn near perfect straight out of the box.

It feels like a proper guitar with a personality, is neatly and attractively finished and features some pleasing retro details such as the scratchplate logo. Given the choice, we'd replace the custard-yellow pickup selector switch tips. Off-white would be a better match and more in keeping with the otherwise pristine appearance of both instruments.

If you need something a little more mid 60s to handle the torn speaker sound of The Kinks or Pacific North West garage bands, that's where the Starfire IV comes in with its spruce centre-block and humbucking pickups.

The Starfire's Anti-Hum Dual Coils aren't voiced like PAFs, but neither do they sound like mini- humbuckers. There's plenty of brightness and airy top-end zing, but it's no eyeball-slicer and the Starfire IV's bridge pickup does a fantastic Revolver-era Beatles impression.

Sure, the lower output of these Guild pickups makes them a little less in-your-face than many 'buckers, but this, in combination with just the right amount of smoothness and sparkle, amounts to a seriously versatile sonic palette.

The Starfire is built to travel further forward through time via Cream, Jimi and beyond into muscular hard rock territory. A very impressive range.

The Starfire IV could have been a contender for a Gold Award if they'd only pinned the bridge at the factory. As it is, it's still a serious ES-335 alternative that's just one mod away from greatness, especially when you consider the fact that current street prices mean that you can get two Guilds for the price of one Gibson.

Sure, it's made in Korea, and the siren song of an American-built guitar will forever drag many of us into troubled financial waters, but the reality is that it would be impossible for Guild to bring a guitar of this quality in at this price point were it crafted in the USA.

Instead, the company has breathed new life into an old design that still has much to say in a contemporary context and is better value than ever. Welcome back!