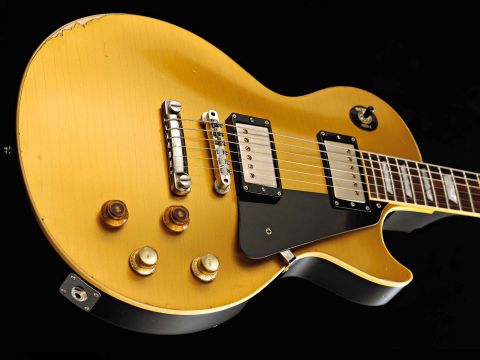 A great take on the '57 Goldtop, with built-in collectability and kudos from one of today's top guitarists.

Gibson's Inspired By series from its Custom Art & Historic division has thrown up a mixed bunch of ideas. Yet whatever your thoughts on the Kiefer Sutherland KS-336, Dave Grohl DG-335 et al, there's no doubting it's a nimble route to honouring any number of players with unique, 'investment-grade' (as Gibson describes it) limited-run guitars.

Blues-rock star Joe Bonamassa is the latest Inspired By subject, right at a time when his career is rocketing. Based on a much-modded 1955 Goldtop that came through Joe's father's shop when he was just 11 years old, this distressed Les Paul pulls in a classic feature set with a few small but significant tweaks.

The Bonamassa Les Paul begins with what Gibson describes as a 'light' mahogany body back and a carved maple cap. Weight is a hot issue for LP aficionados because the much-lauded, lightweight Honduras mahogany used on vintage examples simply isn't available any more.

At 9.1lbs the Bonamassa doesn't qualify as super-light, but it's no backbreaker either and well balanced on a strap - not body heavy - perhaps thanks to the chunky neck and solid Grover tuners.

After that, compared with our reference '59 Historic it's almost identical in terms of top carve, neck pitch and weight. Both body and neck are bound in cream plastic that is lacquered a shade or two darker for added vintage vibe.

Finish perfection isn't an issue because this is a fairly heavily distressed guitar, straight from the factory. The lacquer checking is evocative if a little uniform, while all the dings and scratches are the result of genuine physical abuse from various inanimate objects, lobbed unceremoniously guitar-wards.

The gold - some of which is worn away like old ones do - has something of the vintage bronze hue that's generally considered more desirable than brighter, more yellowy gold, and while the whole thing has roadworn vibe in spades, nobody who's seen the real deal will mistake it for a genuine '57.

The neck is a single piece of mahogany, carved to a big '59 profile. They do vary from model to model and here depth is approximately 23.8mm at the first fret, filling out to 25.7 at the 12th. That's fat for '59 specs with full shoulders to fill your palm. Big necks are an acquired taste; something you warm to when you realise that slim isn't always the route to comfort, especially over long gigs.

The 12-inch radius rosewood 'board has 22 medium frets and Gibson can just about get away with its dirty condition thanks to the aged status. Importantly, the fret ends and binding - no nibs, thankfully - are without problem, making for an easy playing neck.

The whole of the rear of the guitar is lacquered in black, which Joe says was done on this guitar's specific forebear to cover up a series of breaks.

Up at the headstock - pitched at 17 degrees as it should be - the inlaid Gibson logo is in its early, lower position, accompanied by a 'Bonamassa' inscribed truss rod cover, while around the back the man's name is inked on, along with a serial number: this is number 128.

The edges of the headstock are battered as if they've been leant against amps, cymbal stands, walls and gawd knows what else for years of hard gigging. This reviewer can remember feeling sick the first time he dinged a Les Paul peghead; funny how times change to the point where we're happy to pay hundreds of pounds to have it done for us.

And so it is for the hardware. Aged nickel throughout, Joe has chosen the vintage correct tune-o-matic bridge, without the saddle-retaining wire (the wire first appeared in 1962), partnered with a lightweight aluminium tailpiece.

Interestingly, Joe has chosen three steel saddles for the bottom strings, and nylon saddles - introduced on Gibson electrics in 1961 and discontinued in 1966 - for the top three. He says this smoothes the tone of plain strings.

Pickups comprise a pair of Gibson Burstbuckers - a 2 at the neck, and a 3 at the bridge, Gibson's most powerful BB. Burstbuckers are Gibson's modern remake of its original PAF - right down to the 'patent applied for' sticker on the back - and are made with Alnico II magnets and unpotted coils.

Unlike Gibson's newer designs (including the smoother sounding '57 Classic) the coils have slightly mismatched windings, which is said to create an edgier sound and also means they're a little more susceptible to hum. On the meter they read 8.1k ohms (neck) and 8.7 (bridge) for DC resistance - useful at least as a comparison with other similarly constructed PAF-style pickups.

It's good to see CTS 500k pots and some repro 0.022uf Bumblebee capacitors in the electronics cavity, a combination widely considered essential for vintage Les Paul tone. Debates rage as to the authenticity of modern Bumblebees, but even we can only spend so long talking about caps.

Joe has chosen to use gold top hat knobs for the bridge pickup controls and amber ones for the neck, which helps him feel what he's tweaking so he doesn't have to look down. It's easy enough to change, likewise the black pickguard and pickup surrounds that seem to be the visual talking point (they 'should' be cream). Smart or sacrilege, it's a matter of personal taste.

Strung with Joe's preferred 0.011-gauge strings and set with a medium action, anyone used to 0.009s or 0.010s on a slinky neck will find the out-of-the-case set-up a bit of a struggle. For Bonamassa, however, this is essential: he needs fight in the guitar to suit his powerful, highly dynamic style. The payoff is a big, chiming, open toned guitar that has a wide range of textures.

Les Paul tone means different things to different people, but in this reviewer's opinion the best vintage-style examples straddle a fine balance between power and articulation. When you knock the volume back, it needs to clean up; the tone controls need to work throughout their range and so it is with this guitar.

The Burstbucker 2 and 3 combination, coupled with that fat neck we'd wager, delivers a marginally more strident, mid-rich bark than our benchmark Historic '59 (loaded with Bareknuckle Mules). It's a subtle difference, but one that stays on the right side of musicality and articulacy.

In fact the clean tones have a great deal of sweetness. Pile on the gain, and the Burstbuckers hold on to it for a classic rock punch; less 'quacky' than a vintage LP, but not as overbearingly thick as the ceramic-magnet 496R/500T pickups from Standards of yore.

The mixture of steel and nylon saddles might sound like a bit of a gimmick; moreover, doing anything that may inhibit sustain or reduce clarity might seem like madness on a Les Paul. Not so here as there's a smoothness to the top strings.

The lack of a retaining wire means that the saddles do rattle, but Joe is adamant that the guitar sounds better without it. Whatever, coupled with the 'right' neck joint, hardware, pickups, pots and caps, plus well-selected timber, this is a fine Les Paul if vintage-plus tone is your goal.

Not everybody likes that, of course, but that's how the best vintage LP Standards were and the Bonamassa captures a good dollop of that old-school tonal vibe. Choosing it over the Custom Historic 1957 Goldtop on which it's based will come down to whether you're a Bonamassa fan and you like artificially aged guitars.

Price wise, sterling's recent nose-dive against the US dollar has made that retail price look high (early estimates were £2,700) so it's likely that these will end up with collectors as an investment. The best place for them, though, is played loud on stage, by players who can abuse that considerable potential.