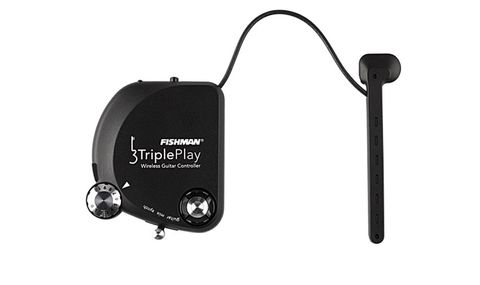 The TriplePlay takes the world of MIDI guitar to a new level - it's an ideal entry point for any MIDI guitar novice.

Last month, we concluded that the Fishman TriplePlay was "the most practical melding of guitar/computer/MIDI we've yet seen". It's now time to take a closer look at this innovation...

The TriplePlay brings something completely new to the table in that it can transmit MIDI data from your guitar wirelessly. Up until now this has involved using a bulky 13-pin cable from a divided pickup/ controller that's either built-in or attached to your guitar.

Here, the TriplePlay simply sends its data through the air to a small USB receiver plugged into your computer, freeing you up to play virtual instruments and synths or input musical data from a distance of over a 100 feet.

The divided (hexaphonic) pickup connects via a five-inch cable to a small controller with a few knobs and switches, and both are easily fitted to your guitar with no permanent damage. Fishman supplies a full mounting kit with hardware for various guitar types including a magnetic mounting cradle that's attached to the lower strap button for the controller.

The TriplePlay controller is powered by a rechargeable lithium battery, which can be juiced by USB or an adaptor. Once the pickup and controller are installed, you can pretty much start using the TriplePlay straight away with any MIDI instruments you might have on your computer. We fire up Logic Pro, set up a virtual instrument track with a piano sound and are able to play it from the guitar straight away, as well as being able to record the MIDI notes on the track.

The TriplePlay can be easily set up to transmit on a single MIDI channel or on a different one for each string. Likewise, we connect the USB receiver to an iPad using Apple's camera connection kit and play Moog's Animoog synth, once we've set the TriplePlay as its input source. All of the virtual instruments in GarageBand are instantly accessible, too.

As far as hardware synths go, you can't connect a MIDI cable to the TriplePlay itself, but using your computer as a 'nerve centre', it's no real stretch to play one via your DAW and a hardware MIDI interface. In terms of playability, the TriplePlay's tracking is spot on. There's no discernible delay between picking a note and hearing the MIDI instrument that it's triggering.

So, we have a no-brainer, easy-to-use instrument for getting MIDI data into your computer or iPad, which is a marvellous asset, but that's only part of what the TriplePlay can do.

Fishman has presented the TriplePlay as a complete hardware/software package, along with its own TriplePlay software, and is collaborating with four other companies who have provided software and content to be used with the system. Two of these are standalone programs for recording and composing/ notation - the PreSonus Studio One DAW and Notion Music Progression, a package that lets you input notes to create notation or tablature.

Performance is the priority for the rest of the third party software, which all works within the framework of the TriplePlay software, a host program that allows you to set up your guitar to play a range of editable, storeable sounds.

Getting hold of all of the software requires you to set up an account with Fishman via your unique serial number. You can then download all of the software and content. Each software item has to be installed separately and activated, and as long as you are methodical and follow the instructions you shouldn't come unstuck.

While the TriplePlay software offers invaluable utility features such as a tuner and string sensitivity setup, its main job is to encourage your creativity and facilitate live and recording use. Once all of your IK and NI instruments are installed, the TriplePlay software can access them and presents you with a list of preset sounds to call up.

Many of them just use one SimpleTank or Kontakt, but you can actually use several sounds together. The TriplePlay GUI is a mixer that has six channels with fader and pan controls for the sound assigned to each channel. Four of the channels are marked 'synth' and you can assign a Kontakt, SimpleTank or Reaktor instrument to each. Another channel can likewise have an instrument assigned to it, but only if you use a MIDI foot pedal (more on that later).

The final channel is for your straight guitar sound. This isn't transmitted wirelessly from the guitar, but can be fed to the channel by simply connecting your guitar's normal output to your computer audio interface. This clean channel can then be amplified using the excellent amp models in the included AmpliTube or Guitar Rig. Overall, what you get is the ability to create a sound by combining a number of synths and blending their sound with your guitar sound.

The TriplePlay controller on your guitar can control what you hear with its three-way switch, which gives you synth only, guitar only or a blend of the two. The controller also has a volume control and four buttons for accessing menus and scrolling through and calling up presets - each of which takes a little time to load, so switching between sounds isn't instantaneous.

If that doesn't give you enough options to play with, you can use any VST format virtual instrument in the synth channels and any VST format effects plug-in in the guitar channel. The system scans your computer's hard drive to find these and adds them to the list of what's available.

We did have problems with this on our Mac, however. We found trying to run in 32-bit mode a bit of a nightmare, but switching to 64-bit made everything run flawlessly - the only problem being that the supplied SampleTank virtual instrument is 32-bit and can't be used. At the time of writing, this is a clear downside, but we have since been in contact with Fishman and it should all be sorted with an update by the time you read this.

The TriplePlay software offers plenty of options in terms of how your guitar works with MIDI - different pitch bend options, and so on - but one major feature is the fact that you can 'split' the fretboard into up to four zones, each assigned to one of the four synths so that only the notes in that zone will play a particular synth.

This allows such possibilities as, say, having a bass sound on your bottom two strings and an organ on the top four. The zones are quite flexible and can even overlap so that you can play two synths together on just a certain part of the fretboard.

Another major feature concerns that sixth channel, which is optionally connected to a MIDI pedal. Pressing the pedal calls up this secondary sound, but there are several options available as to just what you can do with it. You can simply alternate between that and your primary synth sound; you can sustain the secondary sound so that you can play a chord and keep it going while you solo over it, for example; or you can trigger loop recording and playback of it.

The TriplePlay can also run as a plug-in (AU or VST formats) within any compatible computer recording software.

Well, we stick by the "most practical melding of guitar/ computer/MIDI we've yet seen" verdict from our previous piece. The wireless ability is key here, offering direct access into your computer and freedom of movement/positioning. If you want to utilise MIDI facilities on a computer from a guitar this is definitely the smart way to go, but at just shy of £500, it's not exactly cheap.

The thing you're paying for is a hardware/software package rather than just a hardware MIDI controller, although Fishman says that the software doesn't make up a high proportion of the cost. We suspect that a version of the hardware coupled with just the utility functions available in the TriplePlay software would be enough for some users who either already have their preferred DAW, virtual instrument and amp sims, or would like to add their own choices in their own time. In effect, anyone who already has some of the software, and perhaps better-specified versions of it, is paying for stuff they don't really need.

Having said that, the facility the TriplePlay software provides is a very nice creative tool that turns a laptop into a sound source that you can easily access - one that could be connected to the PA, adding a whole new sonic dimension to your live work. If you haven't yet been tempted by MIDI guitar but are curious, Fishman has provided a complete package with all you need to carry out its three intended functions: compose, perform and record.