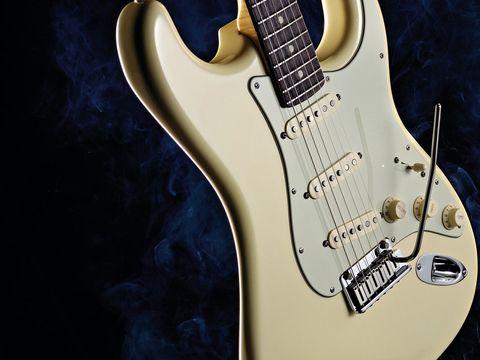 The subtle 'player' improvements produce a top-notch classic that is subtly posh in appearance but awesomely endowed in the tone department.

Fender describes the new Custom Deluxe Strat as being "designed for the working musician". What the company means by that is that its taken the vintage blueprint of this stalwart model and added some modern improvements - in the pickup, bridge, fret and tuner departments - to create instruments that at a casual glance look like regular Fender Stratocasters but which perform like highly-tuned thoroughbreds.

The Custom Deluxe Stratocaster comes in selected finishes that have been chosen for the woods used. All colours are available with rosewood fingerboards or lightly figured one-piece maple necks, but only two-colour sunburst and vintage cherry sunburst come with ash bodies.

At around the two grand mark this guitar isn't what you'd call cheap, but we've become used to Anderson and PRS-type quality on even some regular production Fenders, so the relatively limited nature and that Custom Shop branding should appeal to the lucky folk able to afford it.

How strange it is that, even after all these years, and having seen hundreds of new Strats emerging from their cases, it's still a lovely sight to behold. There's just something about that shape, the curves and the fact that it looks incredible from any conceivable angle that gets every guitarist's pulse racing.

Our Custom Deluxe is the perfect combination of vintage white, mint green pickguard and dark rosewood fingerboard (so many people don't like the 'gingery' rosewood so often seen nowadays that Fender selects the darkest East Indian variety for these guitars).

Other plastic parts are aged white, adding to the 'new but not new' vibe. The Custom Deluxe also features the deep contoured forearm and belly scoop so beloved of vintage Strat lovers, and the perfectly applied thin-skin nitro-cellulose finish is buffed to a high gloss too, helping to accentuate the guitar's slinky lines. Relic-haters, these are for you!

The 'modern player' twists that Fender has built-in include the company's two-point floating vibrato, which has been around for some years and has proved a hassle-free successor to Leo's original. Its solid stainless steel saddles and rear block provide plenty of twang and sustain and its usability goes without saying, given that it's whammy abuser Jeff Beck's system of choice.

Tying in neatly with this is a set of Schaller locking tuners, staggered in height to obviate the need for a string tree and to aid tuning by not impeding the string's route across the headstock. The final nod to the 'modern' player is the 22-fret, 241mm (9.5-inch) radius fingerboard and taller Dunlop 6105 frets which provide a playground for string bending and vibrato - the Strat's perfect style partners.

Fender has got its manufacturing quality down to a fine art these days and so it's no surprise to find flawless construction, perfect fit and finish of all components, and a general feeling that care has gone into every last detail on this guitar. Lovers of class will enjoy the Custom Deluxe's lightly-figured maple neck, the aforementioned dark 'board with 'clay'-style dot markers and the modern script headstock logo. When a guitar looks this good you just want to pick it up and play.

Nicely weighted and balanced, the Strat is still the most comfortable guitar of all to play, whether sitting down or on a strap. And those updates do make all the difference from a player's point of view. Taking a 1965 neck as inspiration the Custom Deluxe's is a slim 'C'-section that feels like you've known it all your life.

The extra fret (vintage-spec Fenders only have 21) adds a top D to your repertoire, while bending a tone at the very top of the neck pushes this up to the double-octave E - so you can now give those Gibson players a run for their money!

We say it so often, but taller frets and a flatter 'board make such a difference to everyday techniques such as bending and vibrato. Actually you don't even think about elements like these because they affect your playing in such a subtle way - in fact you only notice it when you go back to the old style necks and frets, which then feel slightly archaic.

If you think a Strat is a Strat is a Strat, then you'd be wrong. All eras show subtle differences in tone and many players associate the plummiest, woodiest sounds with late sixties and early seventies Strats - think of Chic's Nile Rodgers, or Hendrix's later live tone.

With that in mind Fender has fitted Custom '69 pickups in neck and middle position (the middle one reverse-wound for hum-free tones in positions two and four), and a Texas Special at the bridge. This is perhaps a surprising combination, as Texas Specials are regarded in some quarters as harsh, some might say raspy sounding.

In this setting though it sounds wonderful, with bags of definition but seemingly none of the 'broken glass' rawness that we don't particularly like here. Clean it's sharp and focused, while piling on some gain retains all the shape of the note for very accurate sounds that sit in any mix - or nicely above it if you want.

Flick to the neck and it's pure, sweet and bell-like - instant Little Wing. Again the sound is so defined, although this time ringing with warmth and clarity - and it's such a great tone that you hardly need any overdrive to make the notes sing out. Even with a dash of gain, the clarity and sparkle remains; in fact it's all but impossible to get a bad tone.

The middle position is the same but just more 'clanky' - sort of 'Hank Marvin plays Hey Joe'. It's the Strat tone people never think about using, but it will cope with more or less anything you throw at it - rhythm or lead, country, pop or blues. This pickup and the bridge also benefit from the no-load tone control, which means you can fatten things up nicely or tame the top-end for some very big sounds indeed.

Another great Fender then - what a surprise! It's become something of a ritual of late - Fender brings out some new guitars and we rave about them. But it's not hollow praise. And this is definitely not 'just another Strat.'

Easy as it might be to deride Fender for milking the life out of a relatively small range of designs, the fact that they manage to constantly come up with something so worthwhile with just a tweak here and there is pretty amazing.

Yes, it's quite expensive, but it's a brilliant guitar in its own right. The modern twists on traditional themes bring a half-century-old design right up to date and the pickup choices are simply inspired.