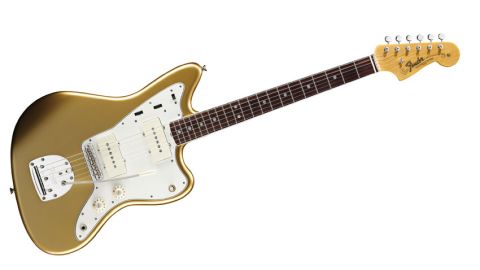 Want unparalleled versatility? There's a guitar called a Strat for that. But as effective as a good Strat can be, sometimes it's refreshing to play and hear something a little different.

So if the Stratocaster and Telecaster are fully paid-up members of the 'one-guitar-you'll-ever-need' club, the popular kids in the playground, if you will, where does that leave the American Vintage Jag and Jazzmaster models?

It's been decades since fans of offset-waist Fenders had it so good. Readers of a certain, ahem, vintage will remember a time in the late 80s when the rise of hard rock and shred meant that then-unfashionable vintage Jazzmasters could be picked up on the cheap; yet it was this very availability that contributed to their resurgence.

Buoyed by this renaissance, vintage prices began to bloom, but the eccentricities and niche appeal of old Jazzmasters made them a riskier, less reliable investment than Strats or Telecasters. Grunge was also responsible for a fair number of offsets being butchered and hot-rodded with humbuckers, too.

Jazzmaster production had ceased Stateside in September 1980. Until the first American Vintage 1962 Jazzmaster reissues arrived in 1999, from the mid-1980s the only 'new' Fender production versions hailed from Japan.

These days, of course, there's much more choice, with a total of eight Jazzmaster models available across the current Fender and Squier catalogues including several artist-signature models, outlandish updates and variations on a theme. Still, those of guitar playing age in the 1990s will remember Fender Japan's Jazzmasters well.

Inauthentic pickup construction, flimsy wiring, unreliable hardware... If this is your frame of reference where Jazzmasters are concerned, you're in for a pleasant surprise. This American Vintage Series guitar may appear broadly similar to the reissue of old, but it's a very different animal indeed.

Of all eight Vintage American instruments on recent test it was the Jazzmaster in Aztec Gold that turned the most heads in the office, rivalled only by the '59 Strat in terms of sheer aesthetic desirability.

In line with the sharper focus of the other models in the class of 2012, the American Vintage Jazzmaster is zeroed in on 1965 spec. The visible features that mark it out immediately as different from the '62-style guitars of the previous American Vintage Series are white binding on round-laminated rosewood fingerboards with larger pearl dot inlays and 'witch hat' amp-style control knobs.

In common with its American Vintage siblings, on removing this guitar from its black tolex case, you are greeted with an instrument that is much less impressionistic than the previous generation of USA reissues and hugely more vintage-accurate and detailed than offshore interpretations or the current Classic Player Series in Fender's catalogue.

The sum total of Fender's meticulous scrutiny, refinements and retooling has resulted in a guitar that simply has more personality and a less identikit feel than almost anything we've ever played that's come out of Fender's Corona facility without a Custom Shop logo on its headstock.

The mid 60s C-shaped bolt-on neck is a much more satisfying palmful than the more generic, slim '60s' caricature necks of older reissues, with a less linear, more human carve that fattens out considerably from around the 5th fret upwards. It might be too much timber for some, but we're sold after just a cursory unplugged twang.

You'll also find the period-correct floating vibrato system - a design that is much maligned, but perhaps slightly unfairly so. We're of a mind that with the right strings and setup, it can be one of the smoothest and most musical vibrato systems out there.

For optimum performance and tuning stability, a set of 0.009- or 0.010-gauge strings just isn't going to cut it. This vibrato wasn't designed for light strings and Fender seems to acknowledge that fact by virtue of the presence of a set of flatwound 0.011-0.050s in among the guitar's case candy.

Removing the factory 0.010s and stringing up with a heavier flatwound set necessitates a few set up tweaks - more string pull means that you'll want to adjust the bridge height and neck relief to strike the right balance between avoiding choking and keeping the action sensible - but if your fingers can cope with a less smooth feel than roundwounds, a wound G and extra mass across the 'board, you'll enjoy bags of additional sustain and acoustic resonance and a vibrato that works magnificently for atmospheric dips and shimmers. And that's before you even plug in...

The redesigned pickups have a better-rounded tonality than older American reissue models and are a world away from shrill Japanese incarnations of the 1990s, though admittedly that ought to be a given when you consider the relative price difference.

This Jazzmaster rewards a cultured, cerebral approach. It's about what you choose to play, how you attack, and working with, not against, the guitar's personality.