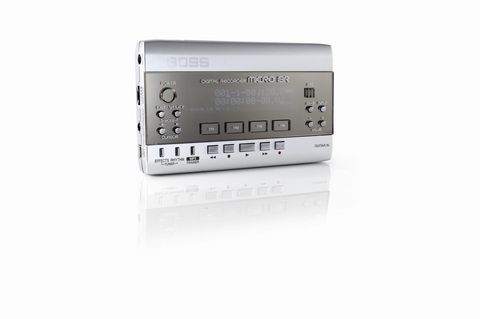 An elegant pocket-sized portable 4-track machine that should find its way into many gigbags.

Over the last few years we've seen attempts from several companies at making a pocket-sized multitracker, often with results that are aesthetically more Bulgarian HGV than Porsche Boxster.

Boss bucked that trend, however, coming up with this slickest looking piece of gear, the Micro BR. The smallest in their range of do-it-all multitrack recorders, it packs in a 4-track multitrack recorder with built-in mic, amp simulations and onboard rhythms into a sleek silver box that sits neatly in the palm of your hand.

The Micro BR takes its power from the mains via a 9V adapter (optional extra), but is designed to be fully portable so can run off a couple of AA batteries for up to six hours if you're away from a mains power supply. The portability factor means it would be impractical to have an internal hard drive - removable media in the form of SD (Secure Digital) cards are thus used to store the audio. The Micro BR will take any capacity card up to 1GB. A 128MB card is supplied with the unit, and to squeeze the most out of the storage capacity, there are three selectable recording modes: hi-fi, standard or long mode, which progressively allow more recording time for a slight trade-off in audio quality.

With four playback tracks, each with eight virtual tracks, the Micro BR has plenty of capacity (with an appropriately sized SD card) to store alternate takes of whatever is being recorded. Recording can be in mono or stereo - there's a mini jack stereo line/ mic input plus a quarter-inch Hi-Z input jack for plugging guitars straight in. The small mic built into the front panel is extremely useful for recording acoustic instruments or humming in musical ideas.

Although a portable multitracker like this has a multitude of uses, it comes over most strongly as a tool for guitarists with a set of axe-friendly features, such as hands-free recording initiated by programming in punch-in and punch-out points.

There's also an onboard chromatic tuner and a large number of insert effects specifically for guitar that use Roland's COSM modelling to recreate the sounds of a wide range of amps, cabinets and effects. These aren't necessarily for recording - guitarists could use them simply for a bit of silent practice through headphones, especially when allied with the onboard preset rhythms.

Another feature that will put a smile on guitarists' faces is a phrase trainer facility whereby a favourite track can be loaded in and slowed down or sped up without altering the pitch.

This is allied to a centre cancel function, which massively reduces the level of whatever is centre of the stereo picture so guitarists can not only slow down a track to learn parts, but they can also effectively remove vocals or a guitar solo and have their own guitar sound right up the middle so they can jam right along.

Songs can be loaded into the Micro BR in MP3 or WAV format and it can in fact be used as a portable MP3 player with an SD card loaded with MP3 files.

Getting back to the multitrack facilities, there are a set of basic digital editing tools carrying out all the usual cutting, copying and pasting tasks, and there's also a track-bouncing mode to build up bigger arrangements - up to four tracks can be bounced down to a single virtual track or a pair.

Although panning and volume can be adjusted there's no provision for track EQ, and send-and-return effects are limited to a single AUX send for each track that can add in either Hall or Room reverb.

More processing can be applied to the final mix via a Mastering Tool Kit with a range of presets that offer compression and EQ tweaks.

Stereo mixes can be converted to WAV or MP3 format and transferred to computer via a USB connection that also allows the import of such files, as well as the backup of BR data. The Micro BR appears as a mounted drive on your desktop, allowing easy drag and drop file transfer.

The Micro BR doesn't reveal its secrets until you turn on the power and the mirrored silver front turns into a display (which is bright and easy to read).

Ease of use has been the hallmark of the Boss BR series, and in terms of the operating system the Micro BR follows in that tradition. The Micro has a much smaller set of buttons than the rest of the range, but they create no difficulties, with the four 'Track' buttons, two 'Cursor' buttons and a pair of 'Value' buttons allowing you to get around the facilities without getting bogged down in menus.

The sound of the insert effects, particularly those for guitar, is excellent, and although some of the more esoteric effects found in some larger BR machines are absent here, there's plenty of variety, giving you the capability of recreating a range of vintage and modern guitar tones.

Sound-wise, you get a clean digital sound when recording - adequate for sketching out song ideas and knocking up basic demos. The onboard mic is no Neumann but it's great for capturing material on the fly and will yield a decent sound when recording an acoustic guitar close up. With the lack of EQ and just one reverb effect at mixdown, the Micro is unlikely to be anyone's first choice for making polished masters, but with careful choice of insert effects when recording and sticking the mix through the mastering effects, basic demos can sound quite classy.

The Micro BR is about the size of a bar of chocolate and every bit as tasty. It's reasonably priced, but bear in mind that you may have to buy a larger SD card, power adapter and USB cable. For those who want to get those spur-of-the-moment musical ideas down or record gigs and rehearsals easily, the Micro BR is an indispensable companion. Guitarists will get the most from it with the tuner, amp sims and usable phrase trainer creating a portable practice aid that will slip into pocket or gig bag.