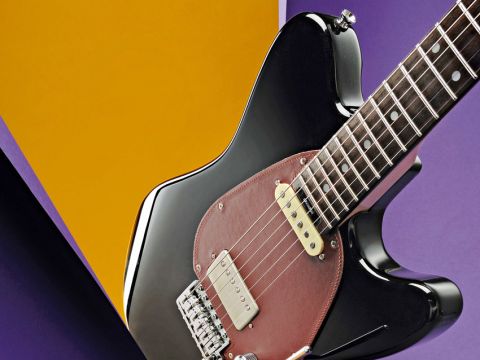 As a concept, the Dayton works well to illustrate a future direction for Blade: a simplistic giggable guitar with bags of class, quality and style.

Think Blade and you'll probably imagine a rather posh Strat-like guitar with an active circuit. Well, there's nothing wrong with that and certainly guitars like the RH4 offer a lot of sounds and versatility. But that very platform has meant that Blade is seen, by some, as a virtual copycat brand.

It's something that, to this writer at least, has held back the brand, along with a rather too swish, almost eighties vibe that seems a little out-of-step with a lot of the instruments used for modern music making. But this new Dayton, designed as a 'concept' by Blade founder Gary Levinson, seems different.

"We were looking to go in a totally new direction," explains Christian Hatstatt, Gary Levinson's right-hand man. "The original concept was, okay, we're going to do a new guitar, but we also wanted a signature of the famous fifties/sixties designs in terms of sound - we wanted to integrate those influences without making them too obvious: a guitar that would sound like the classics but look different."

Built in very limited quantity in Blade's Japanese custom shop, the Dayton also rekindled something of a lost art. "I re-discovered the pleasure of hand-making," says Hatstatt. "In a world of CNC machines and price-driven guitars you, as a manufacturer, spend your time on business.

"But with the Dayton, and a number of other custom shop designs you'll see next year, we went back to the traditional methods: a band saw and pin routers."

Its alder body can best be described as an offset Telecaster, the sort of shape Fender could have come up with but never did. To our eyes it works very well with Strat-style comfort contouring and generous edge radiusing.

Aside from black there's a good choice of colours - all smooth and glossy 'hand-rubbed' nitro-cellulose. The scratchplate contrasts the guitar's outline and may be a point of discussion as it, uniquely, has a "hand-tooled" leather facing. But its burgundy hue sits nicely enough with the body, fingerboard and hardware.

In fact, the Dayton has a real cool vibe about it. Take the headstock: normally adorned with the rather eighties Blade logo, here we have a simple script logo on the slightly tinted and distinctly not Fender-clone outline. There's a single, height adjustable string tree - one of many Levinson-isms, such as the cap at the base of the dark rosewood fingerboard that allows easy access to the truss rod.

The neck feels a little modern but is very well shaped into a slightly fuller 'C'; a mainstream choice that really can't be criticised, although some of us would prefer a little more meat.

The 'board too is very clean with a slightly flatter-than-modern-Fender radius of 12.5-inches, very tidily installed medium gauge frets, dirty looking 'clay' dots and a very old-looking nut from oiled bone - the oil adding the lubrication to ensure in-tune vibrato performance. And with quite a low 'snappy' action the guitar plays superbly.

Old looking, nickel-plated Gotoh tuners are in fact locking and contrast the rather modern, bright-chromed bridge. This well-used Levinson-designed Falcon vibrato is a complex update of the Fender design with dual sustain blocks, roller saddles and screw-fit stainless steel arm.

It offers wide travel - if you break a string the rest stay put (which also benefits country-style two-note bends) - but lighter shimmers are a little harder with a tighter feel.

The Dayton is also passive. "We used to use technology, both analogue and digital, but found it could be too complex for some players - it was simply not rock 'n' roll or organic enough," justifies Hatstatt for the lack of an active circuit such as the VSC that features on the majority of Blade guitars.

Here there's just a three-way lever pickup selector, master volume and tone to control the aged nickel covered bridge humbucker (with the screw poles facing the neck, not the bridge, for a smoother tonality) and neck single-coil.

"We had the design of the single-coil and designed the humbucker to match it. We wanted to achieve some twang as well, so we used less than 5,000 turns per coil and Alnico III magnets for a less edgy sound - it's not far from an old-style PAF, with more edge and quack perhaps."

The Dayton drops us firmly in the 'Californian' camp sound-wise without directly aping a Strat or Tele. The neck pickup - which is nicely matched output-wise with the only slightly louder and fuller bridge humbucker - is a good place to start producing a sizzlin' hot Texas tone that's percussive and balances generous lows with crisp highs and a sweet mid-range that avoids sounding too thick.

The bridge and middle mix is wide and hollowed - more Tele than Strat - and quite lush with it. So many bridge humbucking bolt-on guitars go for a high output 'rock' voicing but here the quite low output 'bucker really suits the guitar, serving up some welcome cream-y nose to the note with more firmness and focus.

Certainly the Dayton is a great match for a Fender-style combo, in our case a Hughes & Kettner Statesman Dual EL84 that really nails some rootsy, bluesy Americana-style tones with ease.

The control layout is very familiar: the volume (slightly tight in feel for really swift volume swells) is smoothly tapered and ideal just to round out some of those highs on the neck pickup while the tone helps to dial in a creamier tonality if you need it.

Yet while the Dayton can easily do clean poppy jangle, or indeed produce some very rocky gain, it's in that halfway house that it seems most at home. There's an authenticity to the guitar sound-wise that really suits older style blues, country and roots rock - it just seems to fly with those sort of lower-gained styles.

The Falcon works well but we couldn't help thinking a more vintage-y vibrato would suit the design better. Hatstatt agrees: "We make these in batches of 30-40 pieces at a time, no more. The next series might well sport a new steel block more vintage-style vibrato."

With over 20 years of guitar-making experience it's little surprise that Blade can come up with a concept as good as this. The Dayton Custom is extremely well designed and built to custom shop standards.

Its sounds draw on the classics and prove very simple yet versatile - it's not a guitar to covet, but a guitar to gig. In this very limited high-end form the Dayton might seem expensive, but while far from cheap it's easily in line with small build custom-made guitars that go through the usual distribution with added margins for the distributor and dealer.

The coming year will see more custom shop guitars from Blade plus a production version of the Dayton at well under a £1,000. Blade has never been away but with a new UK operation and new designs like this, we're hoping it'll be around for a long time.