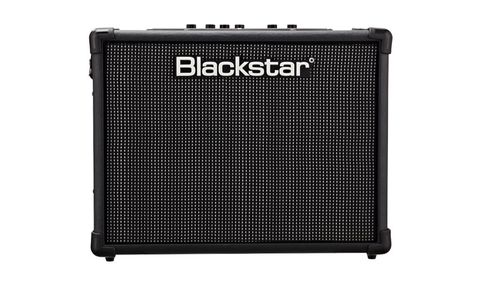 If you like the ID:Core concept but need more power - this is the one!

UK firm Blackstar continues to expand its already impressive catalogue. The ID:Core Stereo 40 is the top dog in a new range of attractively-priced practice amps that we reckon will also interest more experienced players.

The Core uses a stripped-down version of Blackstar's ID: preamp combined with an external power supply, and features a smart-looking cabinet with integral carry strap. Most importantly, behind the grille cloth, there are two 20-watt, five-inch loudspeakers hooked up to a stereo output stage.

The Core models are programmable, with one patch per voice setting capable of being saved on the amp, but more if you use the FS-11 external foot controller (Stereo 20 and 40 models only) or Blackstar's Insider software, via the USB socket. There's a tap-tempo button for manually setting delay times and a manual mode button, which takes the Core into 'what you see is what you get' mode.

It's crazy how the onward march of technology has taken what were once high-end studio-only techniques, recreated them in the digital domain and brought them down to a level that anyone can use and have fun using with a minimum of knowledge.

Beginners will never again be able to blame their amp for sounding bad, but more seasoned players looking for a highly affordable, portable and great-sounding small combo that could easily be used to record your ideas should really check this out, too.