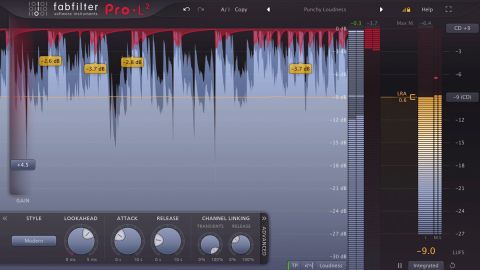 What was already a first-choice limiter is now even more essential, with expanded scope for both mixing and mastering.

Seven years later, version 2 improves on many of the features that made its predecessor such a success, and adds enough new ones to easily qualify as a generational advance.

The first thing upgrading owners of the original Pro-L will notice upon launching its souped-up sequel is the new widescreen GUI. Pro-L 2 (VST/ AU/AAX/RTAS) still offers the same range of sizes and, of course, full-screen mode, but now includes three new view modes for the central level display for which Pro-L is known.

Slow is a half-speed version of the original behaviour (which is still onboard); Slow Down has the display snap quickly left when the waveform reaches the right hand end; and Infinite compresses the waveform by half every time it fills the display, in order to keep everything played back thus far visible. Also new are the ‘handles’ that appear on significant peaks, showing the amount of gain reduction applied at that point.

The new limiting Styles - found in the Advanced slide-over, which still also contains the Lookahead, Attack and Release controls - take the number of genre-tuned algorithms up to eight. Aggressive is a “near-clipping” arrangement for use on IDM, metal and other in-your-face genres; Modern is the new Pro-L go-to for transparency; Bus is for gluing drum busses and individual tracks; and Safe is for when you need no distortion whatsoever - classical, acoustic, etc.

On the left, the DC button applies subtle pre-limiting DC offset filtering for the correction of asymmetrical 0dB displacement.

Next to that, the Side Chain button activates an external sidechain input - useful when mastering stems that need to be limited to match a full master, or for creative purposes.

As well as the previously available ability to automatically counter input Gain increases with Output Level attenuation by holding the Alt key while adjusting either, the new Unity Gain (1:1) button disables the Output Level knob and makes the same adjustment for you in the background. A much easier way to keep a consistent final output volume.

Most interesting of all, the Audition Limiting function solos the difference between the input and processed output signals - ie, it isolates the effect of the limiting, letting you hear just the ‘gain reduction’ and distortion. This can be surprisingly useful not only for setting Attack, Release and Lookahead times in the Advanced section, but also for comparing Pro-L 2’s limiting Styles to fully appreciate their differences.

Switching the Meter Scale to Loudness slides out a whole new metering section next to the Output and Gain Reduction meters, where you can select from a choice of four industry standard preset target levels (-9, -14, -23 and -24 LUFS) or use the Custom option to input your own, and switch the scale between Absolute and Relative for convenience.

Three meter strips show the Momentary (accurate at any given moment), Short Term (a wider, slower analysis ‘window’) and Integrated (continuously averaged until the meter is reset) LUFS values together. Selecting one of the same three options from the Time Scale menu makes that the widest, left-most strip (complete with Loudness Range bracket for Integrated mode) and assigns its numeric value to the big readout at the bottom. Like any good loudness metering setup, Pro-L 2’s is a snap to set up, and presents its information clearly and attractively.

The original Pro-L included the useful Inter Sample Peak metering option, with which the peaks often generated between individual samples by the analogue waveform reconstruction process of any digital-to-analogue converter could be monitored. Pro-L 2 goes a big step further with the addition of EBU R128/ITU-R BS.1770 True Peak metering (the same thing, to all intents and purposes) and - more importantly - True Peak Limiting, giving the initial concept a whole new level of purpose.

True Peak Limiting is simply a dedicated post-limiting process, whereby inter-sample peaks are flattened out, ensuring undistorted conversion back to analogue in even the shoddiest of DACs. With True Peak metering on (and there’s really no reason to turn it off), the overs readout above the Output Level meter shows the level of any inter-sample peaks that might occur. Turn on True Peak Limiting in the bottom to bar to squash them.

True Peak Limiting works hand in hand with oversampling, which also reduces ISP levels by effectively increasing the interpolation resolution of the waveform. To that end, Pro-L 2 also increases the maximum oversampling rate from x4 to a CPU-murdering 32x, via 2x, 4x, 8x and 16x.

Now, then, doing away with inter-sample peaks couldn’t be easier: check True Peak metering to see if you’re getting any of the little blighters, and if you are, increase oversampling and perhaps Lookahead to get them hitting at +0.1 or so prior to True Peak Limiting; then hit the True Peak Limiting button to flatten down that last 0.1dB. As with any True Peak limiter, depending on the program material and other settings, it may still be possible for the odd ISP to slip through when you’re really pushing the ceiling. However, Pro-L 2’s system works very well, and leaves as little room for doubt as we’d imagine you’re ever going to get.

Lastly, we should also mention that Pro-L 2 is fully geared up for surround sound up to Dolby Atmos 7.1.2, with the Channel Linking section controls updating appropriately when surround input is detected.

With Pro-L 2, FabFilter have brought their superb limiter up to date with modern standards, and have measurably improved the quality of its processing. The new Styles add to the foundational arsenal, loudness metering and True Peak Limiting are hugely empowering additions, and the extra Output functions aren’t to be sniffed at, either. One of the best, most versatile and most popular limiters around just got even better.