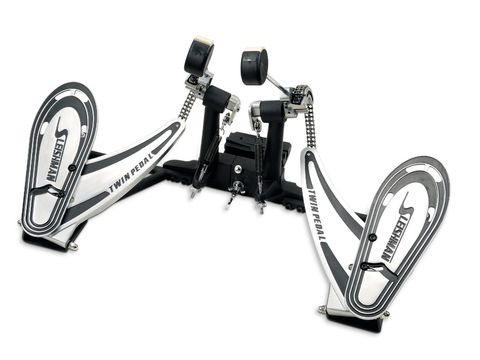 Every so often the drumming world faces a new innovation. Already a favourite of players like Will Calhoun, the Sleishman Twin is a unique answer to the 'problems' of conventional double pedals.

Imagine a world of one-handed guitarists - it doesn't make sense for a guitarist to only use one hand, but many drummers still stick with a single bass drum pedal. With the rise of the relatively inexpensive double pedal, however, more and more players are experimenting with playing the bass drum with both feet.

Almost all double pedals follow the same basic design - a main pedal that clamps to the bass drum hoop, and a slave pedal that's connected by a linkage, usually positioned next to the hi-hat. A common issue with this design is a loss of power through the linkage, resulting in an inconsistent feel between the slave and main pedal. Until now, the only alternative was to use two bass drums - hardly cost- or space-effective.

Hailing from Australia, Don Sleishman thinks he has a solution to these problems in the new version of the Sleishman Twin pedal. Sleishman's original Twin pedal concept dates back to 1972, so Don's had plenty of time to refine this incarnation. And this is the result...

Looking for all the world like it's stepped out of a 1950s sci-fi film, it's obvious that the Twin is like nothing that's come before, comprising two rocket-shaped machined footboards bolted to a black powder-coated frame, with two curved aluminium protuberances that sprout from the footboards and connect to what appears to be a standard 'chain and cam' set-up.

However, the posts on which the cams are mounted are both canted inwards by about 10 degrees, and are set centrally between the footboards, which in turn sit either side of the bass drum, allowing you to sit centrally, facing the bass drum. The beaters are dual sided, and the cams allow independent beater and pedal angle adjustment, allowing you to fine-tune to the nth degree.

The frame has an adjustable baseplate which clamps to the whole of the bass drum hoop to eliminate slippage, and spikes to prevent unwanted carpet creep.

Unpacking the Twin pedal from the included soft case bag, it's clear that it's a well-assembled piece of kit. With the included instructions, set-up was a doddle - but integrating it into the kit took more time.

Because the pedal is designed so you face the bass drum directly, getting comfy necessitated some re-arranging. We placed the snare directly between two rack toms and moved the floor tom further out. Once we'd got used to the new position it meant the kit was laid out with everything in easy reach. With more time it would have been easy to develop an open-handed style, although placing the hi-hat right next to the left pedal meant the cymbals came perilously close to the rack toms.

Once set up, the pedal worked flawlessly. The immediate feel was a little light, but a bit of tinkering and a couple of beater weights sorted that. Pedal response between each foot was similar, as there's no linkage to degrade the response - although it's noticeable when playing that the toe-end of the pedal isn't directly connected to the beater. Toe-stops are, however, included in the bag.

Quick patterns were easy to execute with none of the differences in volume or accuracy often found on conventional doubles. One minor niggle was that the snare stand feet kept catching under the pedals, but you can adjust the distance between the pedals or the angle of the footboards to counter this easily. The spikes proved extremely effective at countering bass drum creep - so much so that they lifted the carpet tiles of the rehearsal studio, necessitating a quick getaway!