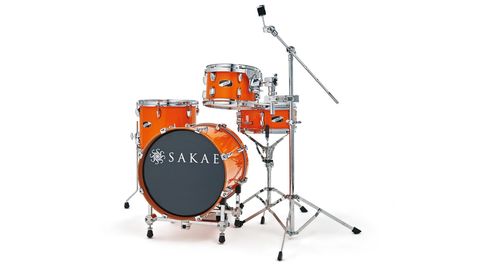 There's much more to this little set than meets the eye. It's versatile and convenient for smaller (or even bigger) gigs, and would make a fantastic starter set.

As the manufacturer of drums for one of the world's leading musical instrument companies for 40 years, Sakae Rhythm's position is well-documented.

Though celebrating their 90th year, it wasn't until 2009 that Sakae Drums were established, taking the bold step to build drums in their own right. Now having rapidly carved a reputation, Sakae Drums are firmly imprinted into the world's drum map.

This particular configuration also includes a hardware pack with single-braced stands for hi-hat, snare, boom cymbal stand, a single kick pedal and the PDR10 bass drum raiser. Other kit options are also available, including shell packs that come with or without a snare drum.

The raiser is an impressive piece of ironmongery which elevates the drum so that the beater can strike the head around the head centre. It is formed from chromed steel in an H shape with legs at the front and back.

These sections are joined in the centre by a linkage (the horizontal part of the H), which also doubles as the kick pedal attachment. Each of the four rubber feet are able to retract to expose pointed spikes, intended to anchor the drum to almost any stage surface. The bracket is fully adjustable (via a standard drum key), for height, drum angle and drum size.

There is little need for knurling on each of the floor tom legs as the side gripping clamps are as impressive as they are functional. Mounting bracketing for the suspended tom comes courtesy of the supplied multi-clamp, which attaches the rims style tom mount to the boom cymbal stand. The cute 12" snare drum features a unique one-piece lug design giving the impression of two lugs being melded together, joining without losing their original shape.

The kit arrives in three smaller-than- average boxes with the snare and suspended tom hidden inside the kick.

The heads of the kick need fitting but, as always, this gives us the chance to check out the quality of build from the inside as well as the outside. The bearing edges are superbly finished, and the inner shell walls smooth and blemish free. A nice touch is the inclusion of a small tub of grease to apply to the tension rods of the kick, which should help give smooth and trouble free tuning.

"Having given the kick just one quick wallop, the sound blew us away, giving the impression of a drum twice as big."

With the front head positioned, the rim is placed over the top of the head - as the rear one has a cut out to allow the pedal chain to sit into the recess, identifying both rims is easy. The 12 tension rods (six for each head) are given a small dollop of the grease at the tip of the threaded portion and finger tightened.

Setting up the raiser, at first, is a little fiddly, but once set up in position this should be much easier the next time. If it was necessary to be dismantled for transit (for example), we think it would be wise to mark the positions with a felt tip to serve as a memory marker. With the raiser set, the kick is then simply lowered into position and the pedal aligned for optimum beater strikes.

Perimeter style dampening on the kick allows a rapid and forgiving tuning process, achieving a decent sound without any of the usual faffing about. Just taking up the slack and smoothing away the wrinkles is all that was done. Having given the kick just one quick wallop, the sound really blew us away.

We thought that our 22" kick (which was in close proximity at the time), was vibrating in sympathy, the sound was that immense giving the impression the drum is twice as big - it is unbelievable!

The suspended tom has a RIMS type chromed steel mount formed in a half-moon shape, which suspends the tom via four rubber grommets. When unpacking the kit for review, we noticed that the RIMS mount was attached to the bottom hoop, rather than the top, which helps raise the height of the tom. It can also be attached to the top hoop quite easily, but doing so makes the winged nut for the tom holder a little trickier to get to and adjust.

Both of the toms prove instantly capable, being powerful and quite loud drums, if perhaps a touch too highly tensioned. With this in mind we find it necessary to experiment with the tuning, lowering them quite significantly.

While both drums accept this readily and rapidly, the snare takes a bit of tweaking having only six lugs per head. It seems that the 20 strand snare is choking the drum, so we would be inclined to remove maybe one or two of the snare wires in order to give the drum a chance to open up a little.