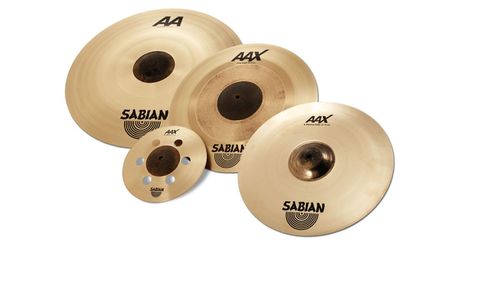 The Cymbal Vote is all about showcasing Sabian's imaginative designs and innovative manufacturing and these winning entries certainly reflect these qualities. The four models possess different characteristics, but they are all strong performers.

Now in its second year, Sabian's Cymbal Vote puts the production of new cymbal designs in the hands of a public vote. Cymbal Vote 2013 began in 2012 when a shortlist of 12 models was announced, of which four would eventually emerge as winners.

To help voters decide, Sabian launched a dedicated website featuring clips of Sabian endorsees putting all 12 cymbals through their paces. The chosen four were announced at January's NAMM show. While the winning models went into production immediately, the eight runners-up will become available to buy as custom shop orders later this year.

The AAX Air splashes are so called due to the six holes they sport (3⁄4" wide for the 8" and 1" for the 10"). They are extra-thin and combine a natural finish with raw bells. The AAX X-Plosion hats have prominent unlathed bells, are medium (top) and medium-heavy (bottom) weight, while the finish is brilliant. A conventional 14" diameter pair is complemented by a dinner plate-sized 16" coupling.

The 18" Freq crash alludes to both 'freak' and 'frequency' in its name and has a band of unusual, roughly-brushed finish between its well-defined raw bell and lathed bow. The AA Bash ride is a crash/ride version of Sabian's existing Raw Bell Dry ride. Available in 21" and stadium-sized 24" diameters, its thin profile, tight lathing and shallow bell make it an intriguing prospect.

Both AAX Air splashes open with face-jerking haste and then snap shut with equal rapidity. The holes not only add to their near-illegal operating speed but also influence their sound, encouraging bite and trashiness. The smaller of the pair is over and done in the flash of a Gatso camera while the 10" model sticks around for a few nanoseconds longer and is fractionally lower in tone.

While X-Plosion crashes are already found in two Sabian ranges, the AAX X-Plosion hats are the first hi-hats to get the X-Plosion treatment. This manifests itself as an initial clout of brightness in the 14" pair, giving them a powerful edge. At the same time they are undeniably smooth, with their volume and clarity being tempered by a broader spread of frequencies. Any overt toppiness is most obvious when playing them half open; closed they are articulate to the subtlest degree.

Beside them, the 16" hats are like a post-adolescent older brother. Their note is much thicker and deeper but they still shimmer with an almost glassy high-end, making them surprisingly slick for such a large set of hats. Like the 14" pair, they are unflappably eloquent when closed and even when loosened off they remain (just about) in control.

With its band of proprietary brushed finish, the Freq crash stands out visually and its performance is similarly attention- grabbing. There is a lot of warmth in its note and a fair pinch of dryness too, but it cuts through all the same. A strong bell response completes the package. If I had to sum it up in one word it would be 'meaty'.

The Bash rides are so named because of their crashing capabilities, but they make the most precise, almost delicate, of ride cymbals. The 21" model produces a tight stick sound above a murmuring wash and will sit there all set, if you wish. The larger ride has a little more spread, a wider tone and the wash is on the vocal side but it remains manageable - if treated with respect.

Crash either of them though and they rear up in a wave of sound. The smaller cymbal is loud yet relatively mellow with it. The 24" drenches everything within a 6ft radius with an ocean-sized wash. Definitely one for lovers of 26" bass drums.