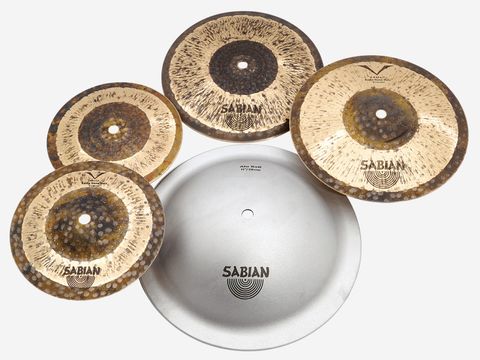 The Alu Bell creates a singular atmosphere that should appeal to percussionists. The Radia hats are gorgeous lookers, but an expensive add-on. Other companies make cheaper mini hats, but these ooze quality, packing a big punch for their small size.

As a top cymbal company, Sabian's stock trade is in bronze. The Alu (aluminium) Bell is thus a rare departure into the world of sound sculpture. The Radia hats fall into Sabian's high-end Vault series and result from the company's collaboration with Terry Bozzio.

The Alu Bell must be Sabian's most unusual offering, looking something like a helmet you might wear going into battle. It's sand cast from aluminium and is completely rigid, with a roughcast ﬁnish.

The Vault category was launched in 2005 to highlight special cymbals beyond Sabian's usual series, while Radia is the label given to designs prompted by Terry Bozzio. These B20 bronze 7" and 9" Nano mini-hats are certainly beautiful looking.

The top cymbal is medium weight with a raw bell; the bottom is heavier and ﬂat. Both cymbals are hand hammered, with raw-ﬁnish bands attractively surrounding a central band of etched gold.

Most drummers start out walloping saucepans and the Alu Bell is like revisiting your childhood. Tap the hard dome with your stick tip and you get an abrupt, thin 'ting'. Catch the turned-out edge, though, and the sound is transformed into an eerie, piercing yet mellow 'ping' that sustains literally for minutes

Swapping to mallets or soft beaters, the timbre is more oriental. This is for a percussionist's rig really: striking it with any found object will result in a new effect. It's an evocative sound, best used sparingly.

The 9" Radia Nano hats are almost big enough to recreate those early days of swing when Buddy Rich played ultra-small hats. Alternatively, both the 7" and 9" pairs suggest a stint of nifty Jojo Mayer drum'n'bass-style beats.

The fact the bottom cymbals are so heavy makes the Nanos surprisingly full-bodied, with plenty of volume and zing. The 9" pair is darker, thicker and warmer than the 7". The 9" open sound is more of a 'tahh' than a 'tiss', while the closed sound is crisp. The 7" pair is quite different - open they emit a sort of high-pitched scream, the result of the bell taking up most of the top cymbal.

Be careful where you position your clutch wing nut - if your aim's not true, you'll hit that as often as the cymbal.