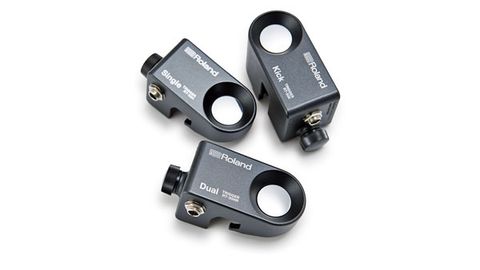 Reliably transforming an acoustic set into a fully fledged hybrid has now become a cost-effective reality - the best of both worlds just got better.

Once the preserve of Stadium Gods, as the cost of the tech decreases, the fusion of acoustic drums with electronics is now within easy grasp of the semi-pro player - welcome one and all, to the world of the hybrid.

The advantages of a hybrid set-up are clear; you can play your beloved acoustic set while also producing electronic and 'real' sampled sounds - any sound you can possibly imagine - and combining them with your acoustic kit. How exciting is that?

We have all three of Roland's brand new RT-30 triggers which now replace their decade-old RT-10s. While the new models have a sleeker appearance, they are not only reduced in size but in price too.

There are many refinements including a more reliable clamp which allows the triggers to fit a wide range of hoops including those with an inward-facing top flange such as the S-Hoop.

Also, each unit adjusts automatically to the distance between sensor and drum head - no tweaking necessary, simply plug and play!

Roland has now suffixed the new RT-30s with an H for 'head' (single trigger) and HR for 'head' and 'rim' (dual trigger) - making it clear that both triggers are suitable either for toms or snare.

However, the RT-30K (significantly deeper than the other two), is specifically designed for the kick. This features "mistrigger cancel" technology which prevents double triggering by utilising two piezo transducers in a similar way to Roland's BT-1.

For review purposes Roland has kindly included the TM-2 trigger module. We are using our usual acoustic set and testing with a selection of snares having different hoops, including the S-Hoop.

Initially we have the RT-30HR attached to a brass snare (which is fitted with a die-cast hoop) while the RT-30H goes onto one of our toms. This has a triple-flanged hoop. However, the clamps are so quick to swap over that we'll be doing plenty of experimenting.

Initially the set-up strangely draws us to try a 'Heavy Metal' kick sound mixed-in with a snare which, though outlandish, gets us thinking about the immense possibilities.

Next, something more 'sensible' with the 'Dance HiLo' snare sound for the head and a simple clap for the rim. Without the electronics, the snare almost appears lifeless but when slowly bringing it into the mix, it seems to transform the drum.

With inspiration from the TM-2, we are layering two sounds on our acoustic kick - the previously applied Heavy Metal kick and a tambourine element (not the whole sound, just a snippet), both of which trigger each time we strike the drum.

The kick drum is punchy and massively powerful and happens to sound as if there has been some compression applied - clever stuff.

Even on our comparatively slack toms, we are impressed with the response from both the H and HR triggers. On the snare drum, even when hammering away as fast as we possibly can, the triggering appears to be accurate with no noticeable latency - impressive.