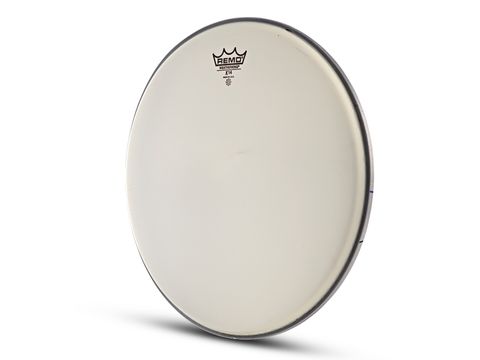 Remo's new Ambassador X is designed to combine the performance characteristics of a regular Ambassador with the resilience of a twin-ply head.

Launched in late 2011, the Ambassador X14 follows the success of the existing Ambassador X range.

"Belt the drum, and out comes a fat slap of a backbeat, while at the other end of the scale it reveals the most delicate of stickings cleanly."

While conventional wisdom would suggest that twin-ply heads are harder wearing, like any head they influence the sound of the drum to which they are fitted. This is often for the better, as many drummers prefer the sound of twin-ply Emperors on their toms.

However, the snare drum is the most played drum on pretty much any kit and is therefore worthy of extra scrutiny and deliberation over head choice. Single-ply heads tend to give the most honest rendering of a drum, and Remo now offers a selection of Ambassador variations made from progressively thicker sheets of Mylar.

A standard Ambassador is 10mm thick, while the Ambassador X (launched in 2010) is 12-mil. The Ambassador X14 is beefier still at 14mm, or the same thickness as an Emperor.

Offered in 13" and 14" diameters, Ambassador X14 heads are only available in a coated finish. With the review head fitted to a steel 14" x 5½" snare, we were struck by the immediacy of its response.

The drum sounds bright and cutting but there is a depth of tone present as well, along with a hint of darkness (owing to the thickness of the Mylar).

In the centre, the sound is wet, fruity and controlled enough to not require dampening. Towards the edges overtones begin to assert themselves, as you'd expect.

Dynamic playing extremes are catered for - belt the drum, and out comes a fat slap of a backbeat, while at the other end of the scale it reveals the most delicate of stickings cleanly. Here ghost notes and buzz rolls come frothing from the stick tips.

There is a feeling of connection that only a single-ply head can supply - one of almost no barrier between the drum and yourself.

It's also loud - rimshots leap out with the most casual of promptings, momentarily wiping out everything else and then lingering on as the ringing slowly diminishes.