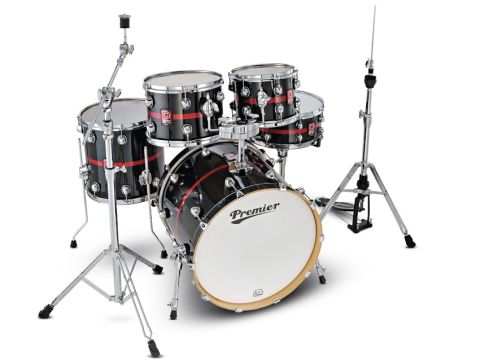 Bringing back the highly-regarded Genista with its distinctive lug is a positive move. The Taiwanese build-quality and finish seem excellent along with the updated choice of American maple or American birch, with or without ISO mounts.

Back in 1987, Premier merged with Yamaha who introduced much-needed capital and modernised the shell-making process.

Premier shells previously had reinforcing rings, but in 1994 the Genista was launched, still with thin shells of Premier's traditional Finnish birch but for the first time unsupported.

There was also a bold new separate lug design and triple-flanged hoops. Genista catapulted Premier into the contemporary drum world and became a favourite of many drummers.

During the noughties, Premier's radical Series drums took over the top spot, which they still occupy, but now Genista is back as a more affordable alternative for pro and semi-pro drummers alike.

This time around, the Genista drum kit is offered with two shell types, American maple or American birch. The choice of American - not European Finnish - birch is down to supply.

Since the drums are no longer made in Leicester but in Taiwan it's easier to source American lumber. Whichever you choose, the shell dimensions are the same - 5.6mm and 7-ply. This is impressively thin and very close to the original Genistas which were 5.5mm, 7-ply (with 7-ply, 7mm bass drums).

What is different are the diameters. Original Genista toms were 6mm undersized while these new ones are 3mm undersized, the same as Premier's top notch Series shells.

The under-sized concept is borrowed from Premier's vast experience with orchestral timpani design and the idea is to make for "easier, more positive tuning and clearer sound quality".

We've got used to Premier's splendid lacquers on its Series drums and the Genista looks just as good, especially with the loud-and-proud big red 'P' badges. The shells are lacquered internally also, and both maple and birch look gorgeous with healthy grain patterns.

Bearing edges are a twin 45° and carefully cut. Our only complaint is with the chrome wrap which has sharp edges on the bass drum hoops that could do with smoothing over somehow.

Premier is supplying both birch and maple kits in a series of five shell-packs. These are Stage 20 and 22, Studio 22, Modern Rock and Heavy Rock 22.

Aside from these shell-packs there is an impressive range of add-ons, much broader than the original Genistas. There are Quick, Standard and fashionable Short Stack toms, plus four bass drums.

The bulbous Genista lug is the original casting. Premier shipped its original moulds to Taiwan for use in its facility over there. Back in the '90s, bass drums actually had a larger version of the lug, but these have been replaced and the new kits have the same lugs on all drums.

The bass drums have modern enclosed tension claw hooks replacing the 'T' handles of the original Genistas. These die-cast claws are an existing component that featured previously on Artist Series drums.

Shell packs come with a single or double RokLok bass drum mount holder. There is a difference in that maple Genistas are supplied with ISO (isolation) mounts for mounted toms, whereas birch Genistas have the more traditional direct mounting block on the tom wall. This echoes the first birch Genistas, although even they could be supplied with RIMS mounts at extra cost back in 1994.

You can also request an undrilled maple bass drum if you wish, leaving out the RokLok post and mounting your small toms from stands.

The ISO mount itself is a sturdy, flush-fitting chromed steel bracket. The tom mounting blocks and floor tom leg blocks, with their oval design, incorporated memory locks and ergonomically contoured wing screws are some of the most handsome on the market.

Supplied heads are Premier's Supersonic Clear 2-ply Pinstripe-style batters on the toms, single-ply coated on the snare and clear single-ply with damping ring on the bass drum batter.

Resonants borrow the Evans denomination of Hazy. Maple bass drums have a black display head on the resonant side and birch drums have a white one. Each 14x6-inch snare drum has 16 separate lugs with triple-flanged hoops, a neat throw-off with comfortably-shaped rubber lever and small thumbscrew tensioner, 20-strand steel snare wires and shallow but effective snare beds.

It's unusual these days for a potentially professional kit to have mounted toms without isolation brackets. ISO mounts do free toms to resonate a little more, but we take the unfashionable view that the resonance gained is minimal compared to the amount of volume a drum head generates anyway.

That is, it's just a few percent and we're not always convinced it's worth the hassle of ISO mounts just to gain that bit extra. Especially when many drummers/engineers put top head damping on their toms as soon as a mic gets near them.

The ISO also makes what are already surprisingly heavy Genista toms (due to those solid die-cast lugs) even heavier. So personally we'd be quite happy with the birch set and its old-fashioned tom mounts.

We also like the combined sound of mounted toms with bass drum, the whole lot humming together. Anyway, feel free to disagree, and if you prefer ISO mounts go for the maple Genista, which is about 10 percent dearer than the birch.

And alright, yes, the ISO frees up its drum a little more- you sense the shell colouring the sound and there's a fraction more sustain. But then the non-ISO tom is birch, which should be tighter-sounding anyway.

In truth the difference in timbre between the maple and birch is barely discernible - we certainly wouldn't be able to tell in a blindfold test. We always think maple is a bit warmer and more middly, while birch is a bit darker and more controlled, but you'd need to own the drums for a while to really tell.

Whichever drums you go for, the thin shells and 3mm under-sizing help them to sing and make them easier to tune. It helps that the tension rods and lugs are well engineered and turn easily with no sticking on the toms especially.

Premier's Pinstripe-like Supersonic batters have good attack and contribute further to controlling the sound. The blippy tone is somewhat Tupperware though, and we personally much prefer a single-ply Ambassador or Evans for batters.

In fact, forget the ISO mount, when we swapped the birch's 12-inch Supersonic batter for an Ambassador the sound resonated so much more it was a revelation. The Supersonic heads did, though, fare better on the larger drums.

So while we felt the small toms were not helped by the Supersonics, we had no such thoughts with the floor toms, all of which gave a good account of themselves. They fairly blasted out like the bass drums.

Ah yes, the bass drums. Both the 20-inch birch and 22-inch maple sounded massive straight away before we touched the tuning. With the now standard Powerstroke-3 style single-ply batters and full front logo heads both the drums thundered, with the 20-inch a bit harder and shorter, the 22-inch dark and cavernous.

When it comes to the snare drums, we're again not convinced by the wisdom of providing budget Supersonic batters. They don't do the drums justice and could even put off potential customers.

They had that thick, cloying quality which makes ghost strokes too buzzy, not sensitive enough. Once more we substituted a trusty Ambassador, immediately conferring some clarity.

We often find we have to persevere for a while with review snares - they come partially de-tuned and sound, you might say, dead on arrival. We've learned not to let this colour our immediate judgment and sure enough, with five minutes of tinkering, both drums were sounding tasty.

Again, it is hard to distinguish them, but for us the birch was a touch sharper, the maple a touch warmer. They are both, though, fat and crunchy with great resounding rim-shots.

Each shell-pack is the same price for simplicity with a good number of add-ons. Genista sets retail at around half the price of Premier's top line Series kits and will appeal to busy and ambitious gigging drummers of all styles.