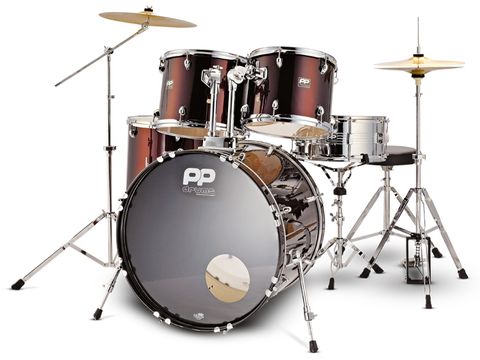 A solid performer that provides almost everything the beginner could want.

The pace of progress is a recurring theme here at MusicRadar. Each year we see manufacturers building and developing their wares, reﬁning and introducing new ideas and concepts, both at the top end and lower down the market.

Of course, this doesn't mean much to some drummers - not many of us can go out and buy a new kit every six months. However, this onward march beneﬁts one group of drummers more than any other - beginners.

If you bought a starter kit 20 years ago, you were lucky if you ended up with a 'DSO' - a 'drum-shaped object'. These days, what was once 'mid-range' has become 'entry level'.

JHS's Performance Percussion brand has been at the vanguard of the entry-level revolution. Does its latest iteration live up to the standards of its predecessors?

2007's PP300 kit was a good value, all-encompassing starter package. Since then, PP has worked on some of the areas identiﬁed, and to maximise value.

Our test kit is ﬁnished in metallic wine-red wrap, one of three options - the remaining ﬁnishes being gloss black and metallic blue. The shells are 9-ply, the type of wood unspeciﬁed but probably luan, and none the worse for that.

The rack toms are 12"x10", 13"x11" and 16"x16" - slightly deeper than perhaps fashion would dictate today, but perfectly functional and capable of delivering a blend of solid fundamental tone and bright attack. The bass drum is 22"x16", and accompanying the kit is a 14"x6" steel snare.

The lugs on the toms and bass drum have been reﬁned since 2007 - they're now a small teardrop shape reminiscent of the Gretsch Catalina lug, rather than the oval tower design of yesteryear.

The two rack toms have the tom holder ﬁtted directly to the shell - the tom arms are the Pearl-design L-arm that enter the shell, providing stability and security once set up to your liking. The tom blocks are ﬁ tted with plastic internal gaskets to prevent metal-on-metal contact and to isolate any rattles - a quality touch.

The drums feature a newly-minted PP logo - gone is the former ragged lettering, to be replaced with an altogether smarter white-on-black design.

The drums all feature Remo heads, the toms and snare have clear single-ply heads, and the bass drum a PS3-alike batter and ported black front head, again featuring the new logo.

The kit comes with a hi-hat stand, straight and boom cymbal stands, throne, pedal and 14" hi-hat and 16" crash cymbals - oh, and a pair of sticks to play it all with!

The tried-and-tested tom mounts allowed us to get the kit set up with the minimum of hassle, although the depth of the toms could potentially limit adjustment - younger or smaller players may have to tweak it before they get the best set-up.

The stands all came together with ease, and once set up to your liking it's apparent that this is a kit that means business - the new lugs complement the metallic sparkle wrap to give an air of quality far beyond the price tag.

The rack toms had a big initial attack, and their depth, together with the single-ply heads, gave a round, open tone - some may prefer to add a little Moongel, but we left it wide open.

The ﬂoor tom sounded cavernous, and the damping ring on the bass drum took a slight edge off but left it wide open, allowing you to apply your chosen level of damping to get the required sound.

The felt beater of the bass drum pedal rounded the edges off, leaving a pleasing 'dooosshhh' sound before a small towel, placed against the batter head, focused the bass enormously.

The snare, somewhat curiously, boasted a clear batter head, and so was more open than a coated batter would have allowed. Again, a little judicious Moongel tamed the savage beast, and the thin steel shell and single-ply heads allowed it to cut through with alacrity.

As a one-stop drumming shop, the PP300R does very nicely, thank you very much. With all you need to get started, frankly the only other thing they could cram in would be your own personal teacher.

A case of evolution rather than revolution when compared with its former 2007 incarnation, the PP300R nevertheless shows reﬁnements in areas such as the lugs and logos that once again set it apart from the competition.