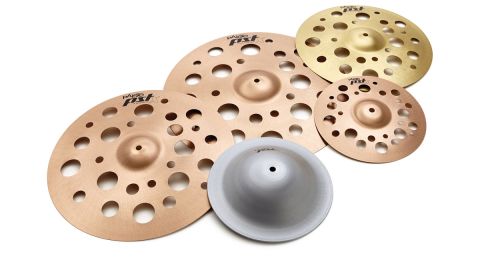 Cutting large holes in cymbals to give a short trashy sound effect is not a new idea, but Paiste has gone a step further to provide this set of relatively low-priced PSTXs.

If what you want is a dirty, electro-digital noise effect, then there is often no need to spend a huge amount of money on a sophisticatedly produced, highly tempered top series cymbal.

Thus Paiste is mixing cheap brass with relatively un-worked B8 bronze for fun on a budget. And in the two bells Paiste uses aluminium for the first time.

The thick, though light, solid aluminium cup chimes are the most unusual items. All the other cymbals have varying numbers/ sizes of holes cut into them. The particular metal is not stated on the cymbals, but identification is easy as the brass and bronze colours are distinctive.

Paiste describes the PSTXs as "handmade in Switzerland using modern, innovative methods". The finely lathed bronze is Paiste's renowned original 2002 B8 alloy. Both bronze and brass cymbals have a scarified surface, with light scratches radiating out over the tops, yet still the finish is quite smooth and silky satin.

In the old days, drummers searching for exotic effects would play a broken cymbal, one with rivets, or a china type. Now we play ones with big holes in them. This shortens sustain and gives a leaner, trashier sound.

We're not talking the hard-won, carefully balanced overtones of a high-end Turkish-style cymbal. More a flat electronic sound effect - and as such, cheap brass is as effective as bronze, depending on what noise tickles your fancy.

Starting with the bronze 14", 16" and 18" Swiss Thin Crashes, these have a bright and thinnish edge over a medium warm body. Light and fast-reacting, quick to fade, they range from the shrill 14" through the explosive 16" to the darker 18".

Adding contrast to the Thin Crashes, the single bronze 18" Swiss Medium Crash is a real earwax-rattler, loud and piercing, harsh and clattery, with more sustain and brute power.

Another variation arrives with the 14" Swiss Flanger Crash. Bronze again, with fewer holes and slightly upturned edge, it is pricklier, sharper, shorter and yet more oriental and exotic.

Given this thin and trashy nature of the PSTX sound, perhaps unsurprisingly it's the smaller cymbals that sound closer to normal cymbals. The 10" Swiss Splash in particular is tasty, snappy and tissy - not unlike a full splash, but slighter, sharper and shorter.

Next up are the three pairs - 10", 14" and 16" - of Swiss Hats, which combine brass bottoms with bronze tops. When closed the conventionally sized 14" pair clack and 'tchh', while open they hiss and spit. It's a dry, tacky sound like a cheap analogue drum machine.

The tiny 10" pair when 'shooped' come on like a spitting cobra. Closed they are really clean and ticky, great for playing electro-dance 16ths and 32nds.

Although there is a minor fashion towards bigger hats, the 16" pair was less successful for us. Closed they clack quite loudly with a loose dustbin lid effect. Shouldered they are messy - we couldn't get a clean 'shoop'.

In passing, we'd suggest you could invert these pairs, or use them separately as two crashes. The 16" brass bottom hat is toppier with less presence than its bronze partner which is warmer and fuller. And we actually preferred this 16" bronze top hat to the 16" Swiss Thin Crash.

Paiste suggests the idea with the 14" Swiss Flanger Stack is to mount both cymbals with the bells facing up, this time with the brass on top and bronze on the bottom (although, again, there's no reason it couldn't be inverted).

The result is of course an offensively harsh smash, ultra-short and startlingly abrasive. Sending ripples of disbelief around the rehearsal room: the drummer's really lost it this time! Allow yourself a small smile of superiority at the limited sonic imagination of your bandmates. Not one for the singer's most elegant and heartfelt ballad, though.

Which leaves us with the 9" and 10" Pure Bells, for which Paiste has turned to aluminium for the first time. The slightest tap on the thick muted-silver bells rewards you with a gorgeous, absolutely pure and soft note. Somewhat gamelan with a peaceful, warm and calm vibe.