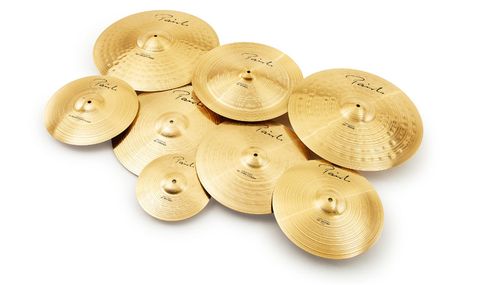 The Precisions allow a small range of Signature quality cymbals into a more affordable price bracket. Sound wise they are brilliant, warm, transparent and clean.

Paiste introduced its Signature bronze alloy back in 1989. The crystal clarity of this secret alloy was immediately acclaimed, but the cymbals have always been expensive. In these straitened times, introducing this limited range of Precision series cymbals makes sense.

Quite clearly in the Signature mould, but coming in at 20 percent cheaper than the regular Signatures, the Precisions cost the same as the popular B8 2002s. As such, prices range from £149 (as quoted) for the 10" splash to £386 for the 14" Regular hi-hats.

These Precision cymbals are cast from Paiste's proprietary Signature phosphor bronze. In appearance they are the same as the Signatures with the characteristic thick wavy lathing rings and polished bronze-gold colour. Some have visible hammerings while some (eg: hi-hats) do not.

We started with the two rides, which was maybe a mistake since they came as a shock. The 22" might possibly be the loudest ride we have ever played. Just riding normally on the mid-body had us reaching for the ear plugs - really, it was that piercingly loud.

The tone is brilliant and the stick definition terrific, but there are also acres of wash and because of the large diameter there are deep tones under the bright clamour. The large bell also means business. You really don't need this one for your piano trio.

The 20" is a smaller version with similar character. Again it has that intensely bright ride sound, you really feel the presence with a wide spread and masses of harmonious overtones. If you play in any sort of metal band these two rides have the necessary volume, but unlike many muscle-bound HM rides they also have breadth, depth and musicality.

This writer's long owned a bunch of Signatures, mostly the thinnest, dark and mellow models, so we had probably developed a skewed vision of the Signature sound. Anyhow, after the shock of the rides we were hesitant about the crashes. We shouldn't have been because these fell right into our previous notion - sweet, crisp and clear. It's always with its clean crashes that Paiste shines and all five here today are splendid to our ears.

The 16", 17" and 18" form a perfectly matched set. Attack is warm and full, super clean with a pure, gorgeous tone. The 17" was perhaps the pick - easy to say with it sitting right in the middle, balancing the sprightliness of the 16" with the extra meat of the 18".

Even better, the 16" and 18" Thin crashes are dazzling. Being thinner than the normal crashes above, you notice straight away the drop in pitch and they respond just a bit faster and 'splooshier'. You can crash these two with just the tips of your sticks, they are so receptive. We've got a favourite 18" Signature Mellow crash and this 18" is just as good.

Not quite so convincing is the 10" splash. Yes the initial silvery attack is spine-tinglingly bright. But jostling right alongside there is a strong bell-drone with a defined pitch. This bell sound is as loud as the splash and on its own could obliterate it. But in the context of a band the tone should be absorbed, leaving just the desired explosive punctuation.

Next up, a single 18" china. Mounted upside down and smashing the downturned brim there is a lovely, decidedly Arabian Nights gong - deeper and warmer than most 18" chinas which are so often brash and tinny. The feel is quite soft for a china.

Overall the tone is still complex, but harmonious, lively and full - a most musical china. Turned the 'right' way with squared bell up you could ride on it, the tone being bell-like; while the crash on the upturned sharp edge is a little harsher, though still deep.

Lastly, two pairs of 14" hi-hats. The normal pair has a surprisingly dry and dark 'tick' when closed. Definition is good and part-opened the attitude gets somewhat perkier, but compared to the rides still more subdued. Overall the vibe is clear and yet soft at the same time.

The Sound Edge pair of hats makes more sense, being noticeably sharper, livelier and with a more precise chip... the Sound Edge concept at work. However, they are still never abrasive, they remain musical always.