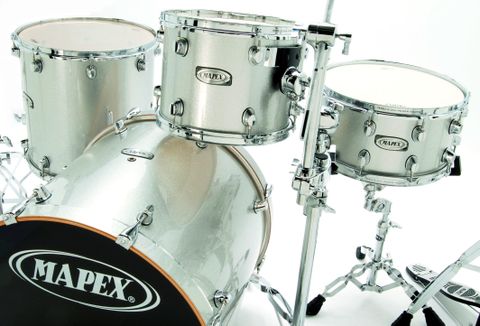 The LA is an impressive kit that has been well conceived and boldly executed. It's flashy and loud to exactly the right degree and all of the components relate pefectly to one another. A quality set of stands completes a package that is difficult to criticise in any meaningful way. Obviously, it's not an ideal set of drums for the quieter player but anyone seeking a kit with attitude should take a close look.

For many years, the standard kit offered by drum companies was a five-piece set-up comprising two toms over the bass drum. Times change, and nowadays a fair proportion of drummers seem to prefer a kit with only one rack tom. This version of Mapex´s Pro M Series, the LA, has taken the one rack tom blueprint and gone large with it.

The Pro M LA Kit boasts a super deep 22”x20” bass drum, a similarly beefy 14”x7” snare, a 12”x9” tom and a 16”x16” floor tom. Throw in two exclusive new finishes and you have a proposition as tantalising as any red-blooded rock drummer could hope for.

The Pro M series is a longstanding mainstay of the mapex range. In 2004, Pro M shells were promoted to all-maple status and are now effectively the same as those found in Mapex´s high-end Orion Series. The only difference is that the outer layer of ply is a more attractive maple burl for the Orion drums. It is these all-maple shells that form the basis of the LA Kit.

At seven plies thick and varying in thickness from 5.8mm (toms and snare) to 7.2mm (bass drum), their relative thinness hints at a lively response. The depth of the bass drum and snare meanwhile would suggest plenty of power - we´ll come to that later.

s well as sporting those impressive dimensions the bass drum is further enhanced by being indrilled. Sitting behind the kit, the kick seems to stretch almost to the horizon - the matching wooden hoops take its overall length up to a tremendous 22 1/2”. The kick drum´s length also offers plenty of opportunity to appreciate the lacquered finish of the kit. Called Platinum Sparkle, it is a fine silver sparkle that suits the kit down to the ground.

The other new laquer option is a blue sparkle going by the name of Bermuda Sparkle. The two sparkle finishes are only available with the LA Kit. An alternative and cheaper non-sparkle lacquer is Midnight Black, a regular finish available across the whole Pro M range.

"Dampening the kick brings some attack into the equation, but the drum is so devastatingly impressive in its raw state that we can´t imagine anyone wanting to stifle it".

Mapex´s familiar oval low-mass lugs are a discreet presence on the shells, again leaving space for the lacquer to gliter away. While the bass drum is completed with the aforementioned matching wooden hoops, the rest of the drums all wear solid 2.3mm Power Hoops. Further chunkiness is to be found in the snare throw-off lever, which snaps open and closed with a reassuring action.

Remo heads are fitted across the whole kit - clear UTs for the toms and bass drum (plus an ebony UT on the front of the bass drum) and a coated UT on the snare.

With the bass drum undrilled, the rack tom is hung from a supplied multi-use stand. A conventional tom arm, with a ball and socket holder, slots into the top of the stand, allowing all the usual adjustments. The hardware package is suitably comprehensive and substantial, consisting of two boom arm cymbal stands, a hi-hat stand, snare stand and a bass drum pedal.

A further boom arm is incorporated into the multi-use stand, making the compliment of stands even more generous. The stands all sit on hefty double-braced tripods and it is hard to envisage anything (or anyone) upsetting their stability.

The angle of the hi-hat stand footboard can be adjusted independently (as opposed to just moving the clutch up and down the pull rod) - a clever detail that alters the feel of the pedal quite noticeably. A fairly radical cam system ensures that the pedal/pull rod movement is truly vertical, making the action very smooth. A spring tension dial offers further adjustment, while the tripod legs swivel through 360 degrees. The bass drum pedal is driven via a double width chain and feels well balanced.

The rehearsal room that the kit accompanied us to had a slightly narrower than average entrance door and we had to manoeuvre the bass drum through the opening with some care, raising justifiable concerns about the portability of such a long drum.

The bass drum´s overwhelming length affords it a huge presence, while the characteristic bottom end richness of maple only serves to intensify its response. Without any dampening, the drum is as much felt as it is heard - the note is almost bottomless and even tuned up it still sounds vast. Dampening the kick brings some attack into the equation, but the drum is so devastatingly impressive in its raw state that we can´t imagine anyone wanting to stifle it.

The snare drum has more than enough authority to match the bass drum. Its depth gives it real clout and it cuts through powerfully. While responding well to higher tunings it really peaks in mid-range tensions - the fat, woody crack that it dispenses there is near pefect. The provision of 10 lugs on the snare is another welcome detail.

On paper, the 4” difference in diameter between the tom and the floor tom would seem to be a little wide. In practise though, the two drums are very evenly matched, with the floor tom giving a lovely clear note without sounding either too muddy or boingy and the rack tom being beefy without losing any of its rounded warmth.