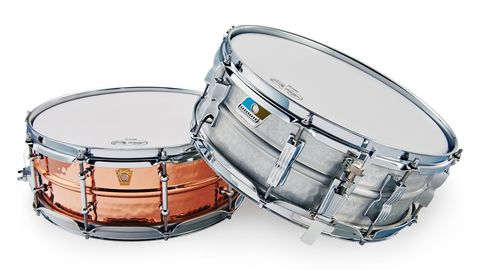 Ludwig's Acrolite and Supraphonic snare drums are decades-old designs, here given updates with hammered shells. It's hard to justify the Copperphonic's suggested price, but it does sound wonderful.

What is it about Ludwig snare drums? Why are so many of us pushovers for these seemingly ageless designs?

Even when they are over-priced and often have what appear to be the cheapest fittings, there is something about those Ludwig shells that makes them special.

Actually, to be fair, the 'budget' Acrolite is fairly reasonably priced at half that of the premium Copperphonic. And the latter will surely be considerably less in the shops than its eye-watering RRP.

But really you are paying for the reputation, the made-in-America seamless beaded shell, and presumably the expensive copper. And above all you are taking a punt on that fabulous Ludwig sound, which is a mystery, but certainly not a myth.

Unlike the Raw Copperphonic which has a dark, streaky patina, the Hammered Copperphonic is bright orange-brown, easily distinguishable from the also-available Hammered Brass Supraphonic, which is a golden - well, brassy - colour.

The 1.2mm gauge copper is the same that Ludwig has used to fabricate its top-rated timpani bowls for a century now.

The equally venerable aluminium Acrolite has a steely-oceanic grey shell with the unusual hammered finish giving it a pearloid look. It sports a blue-olive badge where the Copperphonic has a brass keystone badge, neither with serial number.

As ever with Ludwig drums there is the whistle of disbelief on finding the cheap-looking P85 strainer and plastic-strapped snare wires are still standard issue. You either love or hate the P85. When it works it is the ageless model for the simple, effective side-lever throw. But it can get bent and stuck, and then you wonder why Ludwig has not opted for their own P86 Millennium throw - an altogether more sophisticated, if peculiar-looking, apparatus.

Many have also pointed out that surely it's time Ludwig swapped the precarious screw-head bolts with safe and secure drum-key tightened bolts.

There is also the question of lug choice. This Hammered Copperphonic has decent chrome-plated brass tube lugs, although you can order an alternative version with 10 Imperial lugs. The latter embody the vintage Supraphonic image; however, you may prefer the tubes as they put marginally less of a constraint on the shell.

Whatever your feelings about the cheap Ludwig fittings being at odds with the high prices, the fact is - and we really are not just parroting this - the drums both sound terrific. The copper with its dark and complex character, the aluminium bright but with a dry, focused heart.

The Acrolite has a higher voice than the Copperphonic. It has a bark with a crisp and dry parchment-like initial impact, followed by a healthy after-ring. It is actually ringier, more open, than the copper which we'd describe as denser, giving it a rather tighter, more focused feel.

The eight Classic 'bow-tie' lugs of the Acrolite restrict resonance less than the 10 Imperials of a standard aluminium Supraphonic and some drummers like or prefer the Acrolite because of this very openness.

We're told the shells' circumferential concave beads dry the sound a fraction and the hammering dries it even further, the theory being that the dimpled shells break up the soundwave reflections, shortening sustain, while resulting in more complex sound patterns.

You hear this with the Copperphonic, which is a belter. Brass is an alloy of copper with zinc, so the Copperphonic inevitably sounds quite like its brass counterparts, including the Black Beauties. It just seems a little more mysterious with a warmer sonic foundation, a special tone that is thick and snarey and speaks of quality. Backbeats near the centre are meaty with a powerful, fat authority.

We measured the hammered copper shell at between 13 7/8th" and almost 13 15/16th" in diameter all-round. That is pretty accurately round, and close to the full 14", so the heads fit tightly over the bearing edges.

This is characteristic of old Ludwigs and you can see it as a plus or minus. Rim-shots retain the wide tone of the centre strokes and this may have to do with the heads being tight on the shell, thereby transmitting more of the shell timbre.

On both drums rim-shots zing and cross-sticks rip with a glass-clean clank. But the sound of the Acrolite is perhaps more straightforward than that of the Copperphonic. The latter is deep with exotic overtones, rendering a feeling of greater intensity.