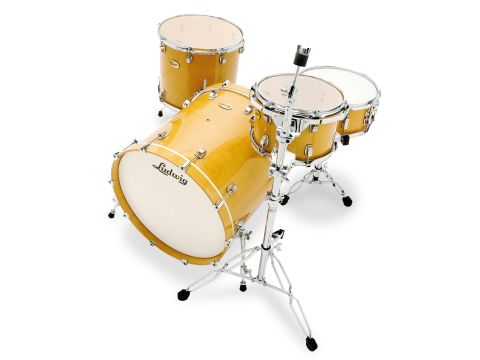 Ludwig's aim is to offer a kit made from American maple at a price within the reach of the average working drummer. In this it is successful. The price is about right and the Centennial is a stripped-down, no frills contemporary design, ideal for hard gigging.

Back in 1909, Chicago percussionist brothers William and Theobald Ludwig launched the Ludwig and Ludwig Company with a revolutionary spring-return bass drum pedal. Ludwig has weathered massive ups and downs, but in 2009 the company will celebrate its centenary in good shape.

Part of that solid status stems from Ludwig's move to making its budget tubs in the Orient. This Centennial drum kit is made in Taiwan, and it's on the cards that Ludwig has even tastier offerings to come over the next year.

Taiwan is now a first-rate manufacturing nation, and Ludwig's intention with this kit is to offer drummers who want to upgrade from the (excellent mainland China-produced) Accent series but can't yet afford the crazily expensive American-made Classics.

A laudable aim then. And the trump card is that the Centennial is made from 100 percent maple. It's described on the website as 'solid maple', which is misleading. It's not solid; it's eight-ply, which is quite different. It is, though, American maple, a more expensive timber than the oriental maple that is commonly used for budget kits. The implication is that American maple is 'better'. No doubt it is, though no-one we've spoken to over the last few years can tell us exactly why. Quality control, consistency and finish are hinted at.

"The bass drum is huge but lightweight - you'd think this would lead to an extremely reverberant, boomy kick. Therefore we were a bit surprised on walloping it to get a decent slam but an abrupt note with virtually no sustain. If it's a clean, brutal slap you want - and we daresay many do - then this is your drum".

The irony is that when we unpacked the review kit we assumed it was Chinese maple - it had that browny-cream colour, not blonde, and not much grain pattern. We prefer the look of the three other high-gloss lacquer finish options: Green and Silver Sparkle and Charcoal Stain. Ludwig's website features a Bonzo-style green sparkle kit in Bonzo formation - one-up, two-down - just the colour and layout the great man played (though a very different bass drum size). It looks great.

Never mind, the review kit's lacquering is excellent - as shiny and smooth as glass. The eight-ply shells are admirably thin at just 6mm. The shells are round and look well made, although there were rather prominent seams on two of the drum interiors. Certainly the slightly rounded-off 45-degree bearing edges are typically Ludwig and good at the price.

The small tom has a newly designed chromed-steel Vibra-Band isolation bracket, and a tom holder is included for clamping to a cymbal stand. There's also a new lug, a smaller and more rounded variation of the mini Classic.

In comparison with some other brands, Ludwig is a bit light on small details. For example, the lugs have thin plastic isolation gaskets but the bass drum claws do not. The claw rods are not recessed, and there are no memory locks on the floor tom legs (although the brackets are sturdy enough without).

The 22"x20" bass drum is huge but lightweight, due to the thin shell, mini lugs and absence of mounting hardware. Now you'd think this would lead to an extremely reverberant, boomy kick. Therefore we were a bit surprised on walloping it to get a decent slam but an abrupt note with virtually no sustain. If it's a clean, brutal slap you want - and we daresay many do - then this is your drum. It's great for double-kick blasts, for example. There's no build-up of rumble, and lots of short, hard notes.

On pondering this, we reckon it's simply because the drum is so deep - like with floor toms, the deeper they get the more attack but the less tone. For the latter you need a shorter drum. Funnily enough that's what you get with the toms accompanying this kit. The 16" diameter floor tom is just 14" deep, the loss of two inches making it agile and bright.

But back to the kick; another factor is the supplied heads. These are Taiwan-manufactured Remos rather than American ones. They're single-ply clear UTs made using the same DuPont Mylar as American Ambassadors, but with clinched steel hoops rather than the lightweight aluminium 'poured' resin hoops of American Remos.

They sound almost the same, but they keep the cost down. The kick thus has a single-ply PowerStroke 3-style (perimeter damped) clear batter and a single-ply coated resonant. We tried swapping this for a felt ring-damped Aquarian SuperKick and it did indeed warm and fatten the sound quite a bit, though the drum still retained its shuddering slam and relatively short sustain.

The clear UTs worked fine on the toms. Some say the metal head hoops make them brighter and tinnier than Ambassadors, but we can't hear it. Both toms acquitted themselves admirably.

Which leaves the snare; the deepish 6½" shell is a sensible match for that monster kick. Now, it's quite normal for any snare to have a relative dead spot if struck right in the middle. This one, though, was livelier in the centre than most, while at the edges it rang like a bell. The old-fashioned snare beds are cut quite deep, narrow and steep, and do their job well. The snare wires themselves are nothing special but the response is good and we weren't plagued by sympathetic rattle.

The drum worked best at medium batter tension where the tone is thick while retaining clarity. With all that edge ring we actually resorted to one third of a perimeter 'O' ring - something we haven't felt the need to do for some time. It certainly seems to prove that the thin shell is resonant, and while the sustain felt minimal on the kick there's plenty on this snare.