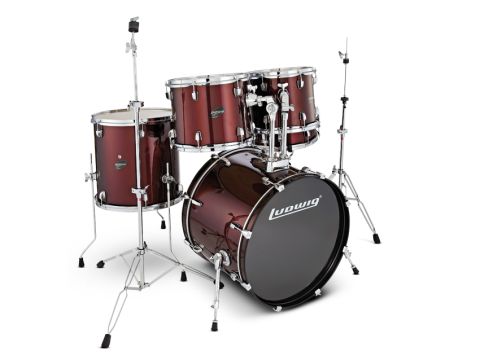 The Accent 100 (previously Accent Combo) is the starter kit in Ludwig's five different levels of drums.

It is available in two set-ups - the five piece Power Combo (reviewed) and the smaller, four-piece Jazz configuration. There is the option of a set of hardware and Meinl cymbals.

The final difference is in the PVC wrap finishes. Black and Wine Red are retained, while the previous Silver, Purple and Light Blue have gone, replaced by Deep Blue and White with black hardware.

The review kit's Metallic Wine Red finish has a subtle glittery sheen to it. The shells are round and look well made. The interior grain revealed a few streaks of brown wood in the white, indicating a cheaper quality of timber. You know you're dealing with budget wood when the drums are so light.

But there's no evidence of filling or splintering or any of the other dodgy defects which plagued earlier budget drums. The interior butt joins were spot on while bearing edges rise to a sharp 45 degrees with just the tiniest roughness.

The Small Classic Accent lugs mean this is unmistakably a Ludwig, even if the twin tom mount is a throwback to the all-conquering early Pearl Export design. The badge is just a cheap sticker, and the chrome plating on the lugs is thin. But there are thoughtful touches such as the white nylon washers under the tension rods and the plastic plinths underlying the lugs.

Although lightweight, the 6½"-deep snare also performed well. There's not too much hardware bolted to it so that it breathes - and the thick-ish (8mm) shell gives it wallop. At medium tension the centre backbeat has a soft, thick, parchment-like tone.

The heads are sensitive right up to the edges, which is a testament to the bearing edges and the well-made shells. Going for louder rim-shots, the drum rings in a well-controlled manner and has plenty of smack without choking.

So the drums have the potential to sound surprisingly good - but we can't say the same for the Meinl HCS cymbals. There's no way to sugar the pill - they are brass clangers.

Ludwig's 200 series hardware package is a much better proposition. The bass pedal, for example, is a handsome looker and has Ludwig embossed in the hinged footplate.
It also has a twin-faced plastic-felt beater and a double grub nut for secure tightening.

Brownie points too for the stool, which should always be included with a budget kit.