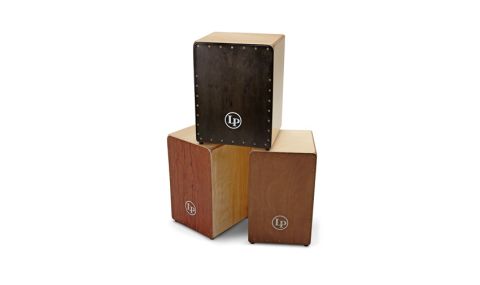 American giant Latin Percussion has long been one of the industry leaders in producing iconic, trustworthy and particularly innovative percussive instruments.

It arguably produces the most widely played and recorded hand percussion instruments in studios and stages worldwide, and certainly shows no signs of letting up soon. This cajon is actually hand-crafted by skilled luthiers in Spain (unlike the majority of mass-produced models), so you can rest assured that it is most certainly the real deal.

The LP Widebody cajon is quite a revelation for a variety of reasons, the most obvious being its dimensions - it comes in at 46cm by 35cm by 30cm, which means that when compared with 'standard' sized cajons you have a slightly less tall but significantly wider cajon to explore. It features a 9mm-thick quality Finnish birch body formed from eight individual plies, and has beautifully sculpted and consequently much more comfortable top front corners.

The Widebody has a wonderfully comfortable 2.5mm five-ply Finnish birch tapa and is finished in an attractive ebony stain. LP uses a 'Lateral Curve System' that allows the four internal, vertically mounted guitar strings to vibrate evenly to produce the optimum 'snare' response. There are two sets of two strings that lie against the rear of the tapa in a V-shape, adjustable via two hex screws in the base.

The Widebody delivers top quality and professional tones due to the quality woods and serious attention to detail by the           Spanish artisans who make this cajon.

It's very comfortable (not to mention fun!) to play for extended periods and has a yielding quality with much more 'give' to the tapa than you'd expect, inspiring possibilities for extended playing. As you might expect, the Widebody's bass tone is 'turned up to 11', and even un-miked in acoustic settings is a powerful instrument to play, and its mid and high register is accentuated as well.