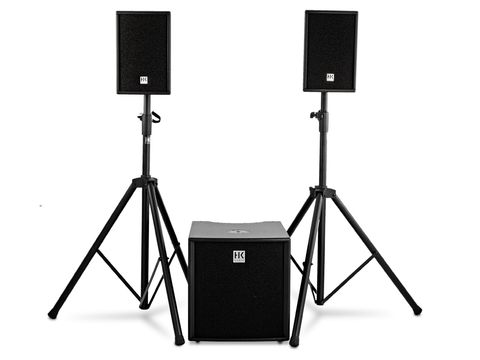 As a flexible tool it's not infallible, but if you're thinking of a drums-only amping solution, the Impact will certainly live up to its name.

One of the many great things about electronic kits is that you can control their overall output level. The downside is that to hear them at all in a gigging situation, you'll need to amplify them.

The most obvious solution is to run the kit through your band's PA system. But there's a problem. The fast transient attacks of your kit, followed by a wash of high end from the cymbals, and sustained mid/low ends from toms and kick drums will require an amp with enough oomph to do them justice.

"If you're playing electronic music it can take you from local pub disco to bottom melting thump."

All of these frequencies from your kit contain a lot of sonic energy, and sap the headroom of your PA system. If you've ever tried running your e-kit through your band's vocal PA, sans bass-bins, at the same time as your singer, you'll probably have experienced this already.

A PA system like the HK Audio L.U.C.A.S. Impact could be your answer for live use.

It's a full-range 2.1 system, comprising a 15-inch subwoofer and a pair of 'top' cabs each containing an 8-inch speaker, and 1-inch compression driver. The subwoofer also houses a 700 watt amp to drive the low end, and two 250 watt amplifiers to power each satellite cabinet.

Also loaded into the sub are the amp's controls (input gain, L/R balance and subwoofer level); HK's DDO System Controller and input/output sockets for connecting your source and speaker outputs for the two cabs.

A PA is notoriously bulky, so HK Audio has combated this in a few ways. Firstly, the subwoofer comes with four casters for wheeling it around. The L.U.C.A.S. Impact also makes use of Class-D digital power amps and neodymium speakers, which are lighter than their traditional counterparts.

Setting up the Impact system is easy, even if you're a newcomer to PAs. The subwoofer plugs into the mains, and both satellites are connected to its speaker outputs using Speakon cables.

The left and right outputs of your kit's brain are then connected to the inputs, and a single input gain control for both means you'll have an equal level on both sides. The input is via combi-sockets that will accept either an XLR cable or jack lead, so it's impossible to get them mixed up with the speaker outputs.

Once you've set the main system level, you can adjust the subwoofer's level too, and you're ready to go. The resulting sound is stunning, and at the cost of a high-end electronic kit, it ought to be.

The sub provides the kind of low-end monitoring that you feel, as well as hear, taking away the honkiness that you sometimes get when you're only hearing the low mids and high end.

Kicks become deeper, toms fuller, snares meatier all while maintaining the crispness of the rest of the kit. Perhaps the biggest difference is when you pump a sustaining 909 kick or djembe sample through the system.

You'll start to notice parts of the sample popping out that you didn't before. If you're playing electronic music, it's the kind of difference that takes you from local pub disco to bottom-melting thump.

The Impact doesn't have bass/treble EQ controls in the traditional sense. Instead, the DDO System Controller takes care of this for you. There are five presets: Mute, Speech, Live 1, Live 2, DJ 1 and DJ 2.

Depending on which one you select, the DDO re-voices the output with different EQ curves and dynamic processing. For example, Live 2 gives a more subtle bass response than say DJ 1, which is designed to reproduce CD audio, with a strong low-end, reduced mid-range and more top-end sparkle.

Depending on what sort of sounds you use from your kit, this can have quite a big effect on the sound. We found samples of acoustic rock and jazz kits worked better on the Live settings, while electronic sounds were better suited to the DJ modes. It's a case of trying each until you find the mode that works best for your set-up.

We've already noted the price, and that's before speaker poles and cabling. It's a large investment, and you'll need a vehicle large enough to cart it around with your kit. You'll need a mixer too if you want to connect other sources to the system at the same time.