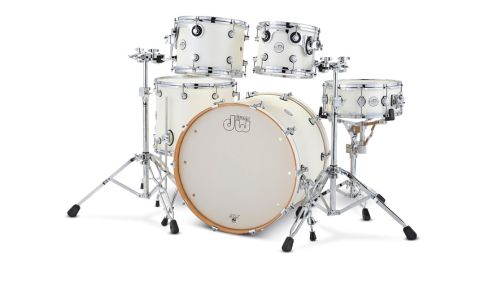 The standard of build is nothing short of superb, faultless in fact. The sound is impressive and all the features equally so.

Prior to the inception of the Performance Series, any fully-fledged DW drum was made to order and so retained a suitably hefty DW price tag. This new Design Series follows that trend of 'boutique inspired', pro-quality drums with a more affordable pricetag.

In order to maintain this level of affordability, all of the drums in the new series are made in DW's Taiwanese factory, where the cost of labour is drastically reduced.

However, the quality of build is said to be of a similarly high standard and all drums are produced with comparable tooling to their Californian counterparts. As a further means of keeping prices competitive, at present DW are only offering one standard shell pack and a limited choice of drum sizes and finishes.

There are a number of aspects that differentiate the Design Series from any other line of DW drums: slightly thicker veneers, grain orientation, lugs and, according to DW, their sound.

Instead of 1/36" veneers, the Design Series shells are made of slightly thicker 1/32" (0.8mm) slices. This produces a thicker shell wall, negating the use of the familiar reinforcing hoops found on many of DW's drums.

Hand-picked North American Maple is the material of choice - a timber favoured by many drum manufacturers and used for many DW branded drums, including some of the high-end Collector's Series.

The shells of the toms and bass drum are formed with DW's proprietary HVLT (Horizontal Vertical Low-Tension) process. This follows an arrangement of a vertical grained inner, horizontal outer and cross- laminate plies sandwiched in between. HVLT shell construction is unique to the new series and, according to DW's John Good (vice-president and co-founder) it is the horizontal outer ply that gives the Design Series their initial attack and articulation.

The vertical inner reinforces the familiar maple warmth while managing to 'pack a punch'. The snare drum is constructed with an HVX ply configuration (as in the Performance Series): the grain is layered firstly as horizontal then vertical until the last two inner plies, which are cross-laminated.

For review we have the only available shell pack configuration currently offered: a 22"x18" bass drum, 14"x51⁄2" snare, 10"x8" and 12"x9" rack toms and a 16"x14" floor tom. The series comes with chromed hardware as standard, STM suspended tom mounts and the rather cute DW mini lugs. These are slightly smaller than the 'quarter' turrets of the Performance series, and I think they look superb.

The new models have been re-engineered with dual shell fixings and a special fixing arrangement. The snare drum has a set of centralised mini lugs with extended portions designed to accept the tension bolts top and bottom, giving a slight 'propeller look'. The mini turret has been used on some special drum editions in the past, but DW has no future plans to use them on any other series.

We have become accustomed to a wide choice of add-on drums and a massive selection of colours/finishes from the DW camp. However, there are just three add-on drums - 8"x7" suspended tom, 14"x12" and 18"x16" floor toms.

Also, the choice of finishes (all UV cured) is extremely limited, but it does include the beautiful pearlescent White Matte (as seen on the review kit), Cherry Stain Lacquer and a Tobacco Burst Gloss. However, judging by the strong hints of DW's vice-president of marketing, we don't think it will be too long before we see the new series expanded.

The whole kit really is beautifully finished inside and out and the build quality and standard of engineering looks to be equal to that of the American-made drums.

Inside, instead of the familiar stamps of the date the drums were manufactured and the designated note for the 'Timbre Matching' of the Collector's Series and other high-end DW kits, each of these drums has a large Design Series label giving a variety of information about the series and various patented components for the drums.

All of the heads are single-ply and the rims of the toms and snare are graduated in two thicknesses according to drum size. Altogether this should maintain an open drum sound and allow plenty of projection.

The toms have a clear top and bottom head, while the batter of the snare drum is a Remo 'Controlled Sound' equivalent that has a reverse dot stuck to the underside. The bass drum is supplied with a white suede front head, sporting a fairly understated but distinctive DW logo outlined in black.

There are some trademark DW features on the kick, including six tiny holes, or 'ports', around the outer perimeter of the head, and the offset DW badge. The head is made from thin Mylar and has no form of in-built dampening but the rear head does, with a perimeter-type internal dampening strip that extends inwards by around 3cm or 4cm.

Apart from the kick, all of the heads are in situ and in a reasonable state of tuning - albeit a tad too high for us on the toms. The initial task involves fitting the two supplied BDF2 dampening pillows and putting both drum heads onto the kick.

Usually the dampening consists of a single pillow in the shape of a dog bone - DW has opted for two separate pillows and dispensed with the middle section. After some minor de-wrinkling of the batter and applying more tension to the front head, we are ready to go. From the very first smack of the beater, this drum proves instantly impressive.

It provides us with an amazing punchy slap followed by a dry (courtesy of the pillows), deep and rich drum sound - if you could bottle the sound of a kick, this would be the one! From behind the drums, the bass drum gives a confidence-boosting low end and, according to the bass player standing out front, it can be felt as well as heard, as he said "it made my trousers flap" - a compliment indeed!

With very little tuning, the toms soon get the thumbs up with their unhindered single ply heads allowing the drums to ring freely, giving greater potential for projection. They are well focused and each strike comes with plenty of attack, clearly discernible from each of the previous strikes, which aids articulation.

After the initial attack, the 16" tom produces a deep, powerful boom followed by a reassuringly long overtone that slowly and evenly fades away.

Decreasing the tension of the 12" tom and increasing it on the 16" floor tom goes some way towards compensating for the potentially wide gap in pitch between the two drums. A 14" floor tom would fill this gap nicely - if I were to buy this kit, this would be the option I would choose.

Lastly, the matching wooden snare is a welcome addition to the shell pack. At a low tuning it is significantly beefy, with the reverse black dot of the batter providing extra body to the 51⁄2" depth. Cranking up the tension rods a few turns gives the drum more attack while still retaining its throaty authoritative power. When more cut is required, it's not at all averse to a well- applied rim shot: this sends the drum immediately chomping its way through any loud amplification.

Perhaps the initial lack of add-ons and choice of finishes could put the dampeners on the Design Series drums, but we can't imagine it will be long before those options begin to appear. Either way, if this new series doesn't sell like hot cakes we will eat our hi-hats!