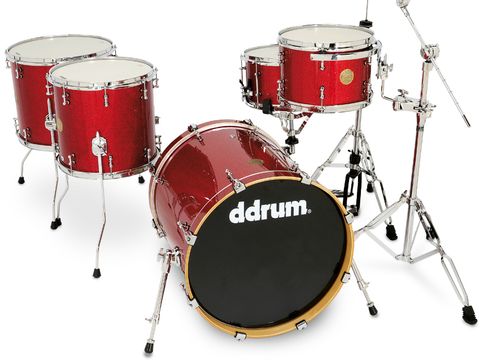 In under five years ddrum has achieved something money can't buy. While it's actually just a typical modern kit with generic styling, the company has created a cool, youthful image, an excitement and a sense of adventure.

The Swedish company Clavia was in at the forefront of the digital music revolution in 1983 and its ddrum electronic drum gear became a byword for quality. So it was a surprise when the ddrum logo first appeared on acoustic kits in 2005, marketed by Florida's Armadillo Enterprises.

Right from the off the company was on the money style-wise, with strikingly hip drum kits and cool names - Diablo, Dominator, Dios - which soon established the ddrum brand in drummers' minds. ddrum identified the one-up/two-down configuration as the coolest in younger drummers' eyes and offered outrageous finishes to complete the trick.

The ddrum range has expanded so quickly it's easy to get confused. To clarify, the top line American Custom drums are made in the USA utilising Keller shells. The Dios is also a professional line, but is more modestly priced and made in Taiwan. As well as the M (for maple) kit reviewed here, the Dios is also available in ash, bubinga, walnut, birch/aspen and the Elite Tiger Eye bubinga.

The Dios M shells are hand made and finished from North American maple in the company's Taiwan factory. Toms are 6 ply, bass drums and snares 8 ply.

ddrum claims the diagonal seams and cross-laminated plies make its shells some of the strongest around, although surely this type of construction is normal practice? Whatever, the shells are well finished and circular to within (by my measurements) a 1 to 3mm tolerance, which is, we find, common at this price level. Funnily enough, the bass drum - the largest shell - was closest to round, almost spot on. The shells have 45° bearing edges and a slight round-over to the outside wall.

Running a finger round there were the usual minor glitches, but more interestingly the small tom had edges which were rounded off more than the other drums, which were all quite sharp. This tom also had a slight nap left on the inside whereas the others were sanded smooth.

We take this as evidence of the hand finishing which ddrum talks about and it suggests that, although quality control is good, it's not quite 100 percent as yet.

The review kit is finished outside in lacquered Red Cherry Sparkle. This is as beautiful a glass-like finish as we've seen. It's a traditional sparkle compared with some of the more garish ddrum finishes, but it's faultlessly executed. And there are five others to choose from (Olive Sparkle, Natural, Pearl White, Trans Black and Yellow/Gold Sparkle Fade).

Moving on to the shell fittings, this is a mixed bunch. ddrum is a relatively new company and tooling up for all the metal parts is a huge investment. The company seems to be fairly early in the process, with a mixture of generic metal parts with ddrum exclusives.

The other generic fittings are perfectly adequate, although we have one or two minor comments. For example, the wing nuts on tom holder and floor tom legs have squared-off, sharp-ish inner edges. Uncomfortable and old fashioned, these could do with rounding off. Similarly, the small tom resonance mount bracket has an inside edge which is quite sharp.

On the plus side, this bracket has a 90 degree angle cross section, ie: it's not a simple flat plate, and is thus far more rigid. The memory locks for the floor tom legs are not the most integrated of designs. Hoops are 2.3mm chrome plated, triple flanged steel, not always perfectly circular, but again we must emphasise this is not at all unusual at this price level and not something to lose sleep over.

The 14"x7" snare is fitted with the improved, new edition Nickelworks Piston strainer (only available on the two Dios M snares). It's a top quality strainer with a delightful action. It's a shame its reputation suffered when early models occasionally proved flimsy. This problem has now been rectified and the throw-off should prove wholly reliable.

On taking the mighty Dios for its road test, it did fine, and the drummers in the audience said it cut through well. The kit wasn't miked, so we took a chance and played it straight out of the boxes, ie: with both intact heads on the bass drum and no damping whatsoever.

One advantage of 20" deep kicks (although a pain to transport) is that the extended depth means the note is so low you don't need damping or a cut-out, at least so long as you're not miking up.

It's a joy to play the drum au naturel. And it sounded suitably cannon-like. Hard edged but beefy. Although we only used the 12" and 14" toms, they were everything you want from a maple kit. In truth most decent contemporary kits sound pretty much alike. They all tend to have straightsided maple shells with 45 degree edges, so it's impossible to say much new about the sound.

We were grateful ddrum had shipped the kit with Remo coated Ambassador-style UT batters, as this is the sound we always come back to - bright and punchy with an underlying warmth, the shallow tom sizes giving immediacy and clout once they were tweaked up a bit.

These Taiwanese Remos sound virtually the same as the American ones, although the metal hoops are clinched not poured.

We also enjoyed playing the 13"x7" snare. You get more body and a tubbier tone with a 13"x7", a tone which many prefer. The only drawback with this size is you get less of a cross stick sound, yet rim shots are just as penetrating. Because the Dios is only available in two configurations, if you're not keen on a 13"x7" snare, you're a bit stuck.