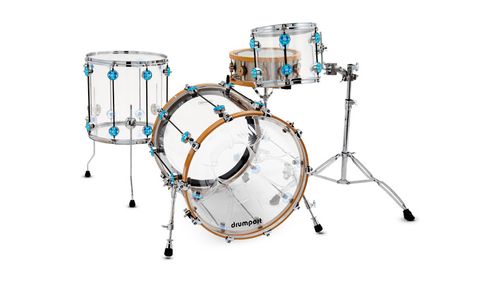 A visually-stunning, aurally-pleasing kit that delivers in spades on many levels. The price tag may frighten some, but you are paying for supreme quality, and if it's a custom-made kit offering something a little different that you're after, this would be a top choice.

Chequerplate Drums And Percussion began life in 2008 when founder Steve Poensgen began experimenting with tambourines before moving on to other effects, then snare drums and now kits. More recently Example/Lily Allen drummer John Jenkins has become a partner in the company. Here we take a look at one of the firm's more dazzling LED Series drum kits...

Our Chequerplate review kit is an acrylic-shelled three-piece from their LED Series, completed by a Stainless Maple snare. Chequerplate buys its acrylic in two-metre lengths, with all work such as drilling holes and crafting bearing edges taken care of at the company's Shrewsbury HQ.

Okay, let's address the elephant in the room - those LEDs. Chequerplate's own C-thru lug alows the LEDs to be housed within the lug without the need to hide reams of wiring. A 12-volt charge is then distributed to each lug via the kits' hardware creating a cool glowing effect. This tidy approach means the kit can be played without the LEDs illuminated without massively detracting from its visual appeal - you're still left with a gorgeous acrylic aesthetic.

The kit supplied features blue LEDs that shine consistently, although Chequerplate does offer alternative systems that allow colours and sequence patterns to be changed at the touch of a button. As with any custom company, they will more than likely be able to supply you with whatever you are after (that goes for drum sizes as well as lighting rigs).

The 22"x22" bass drum looks enormous straight out of its case (Protection Racket soft cases are supplied with each drum) in part due to the protruding lugs. The kick drum's 8mm seamless, cast acrylic shell looks stunning and on unpacking we are also interested to note that, along with an Evans batter head, a DrumPort is fitted to the resonant side.

Onto the toms, we're supplied with a 12"x10" mounted tom and 16"x16" floor tom. Both drums are seamless, cast acrylic shells, and both are 6mm thick. On removing the supplied Evans heads we can see that bearing edges on all drums are cut to a precise 45°.

While we have the heads off we also have a prod around the LED-filled lugs of which we have 20 spread across the bass drum, 16 on the floor tom and 12 on the rack tom. While slightly larger than those found on many kits due to their multitasking nature, these lugs have been beautifully crafted and are a work of art, as well as engineering, in themselves.

The snare provided is not from the LED Series, but allows an interesting comparison with Chequerplate's other work. The drum in question is 14"x51⁄2" with 4mm stainless steel shell and brushed finish. HighWood maple hoops and maple lug inserts have been used. The snare strainer is the classic, ultra-smooth Trick GS007.

A mention must also go to the sheer weight of the kit. The whole thing is a muscle-tester, but the snare in particular is monstrous. You'll certainly want to make sure all nuts and bolts are locked in tight on your snare stand before placing this beast into position.

Right out of the box, and without tuning, one thump of the kick drum results in a satisfying thwack. We're due to give the kit an extended play at a local, sound-treated rehearsal studio, but we can't resist having a quick test in the living room. Obviously, this is to test the kit in a full range of sonic surroundings, and not because it looked so appealing that we couldn't wait to put wood to skin.

Regardless of the reasoning, we are instantly impressed with the sound. Even in an echo-y, long room (although we've played gigs in venues with less acoustic treatment), we're able to get a solid sound with a minimum of fuss.

On setting up in the more acoustically- pleasing surroundings of our rehearsal studio, it is again incredibly straightforward to get a sound we are happy with right off the bat. The 22"x22" bass drum packs a reassuringly punchy attack, the DrumPort adding extra body to an already impressive sound.

From behind the kit the sound is substantial, but it is when stepping out in front (allowing the bassist behind the kit to handle kick drum duties), that the weight of the sound is fully appreciated. We're greeted with a deep, rich thud, each beat is felt as much as it is heard.

For the sake of fairness we do later go back and replace the DrumPort with a more traditional head (an Evans EMAD EQ3), and while there is arguably less definition to the sound, the projection remains impressive. So, it is a big tick for the bass drum, and thankfully the rack and floor are made of similarly high quality stock.

Again, without any tuning both deliver impressively rich tones - the 12" rack (which is mounted off a separate stand) carries just enough ping while the 16" floor's tone is a warm thud not entirely dissimilar to that of the bass drum.

Acrylic kits can be knocked for lacking the complexity of their wood counterparts, but we're pleased to report that this is not a noticeable issue here. With very little fine-tuning we're greeted with a full-bodied tone with a versatility that allows it to run the gamut from a sound suitable for backroom jazzers to arena-filling rockers with just a few subtle adjustments. The tonal consistencies of the acrylic shells also mean that such tweaks don't require lengthy tuning sessions.

The snare, despite not belonging to the LED series, is a surprisingly snug fit with the kit. On first hit the tone is a real ear-splitter - it is immediately clear that this is a drum that needs to be treated with a little respect, skin smashers will get a satisfactory sound but will miss the tonal intricacies that this drum is capable of delivering.

This is a drum perfectly at home with ear-drum threatening snare hits, but is also able to articulate delicate ghost notes without a problem. The deep wood hoops do look like potential stick chewers, although during our test a succession of rim-shots and cross-sticks saw minimal damage taken by the sticks, and absolutely none to the hoops.

As strange as this may sound for a drum kit filled with LEDs, the illuminated kit manages to juggle an attention-grabbing appearance with a distinctly subtle feel. When lit, they are certainly show-stoppers and look breathtaking, but when they are constantly lit in a single colour, rather than flashing, beeping and hollering, makes it easy to forget that this is an LED kit as opposed to simply a stunning kit.

While many such set-ups can feel a little too gimmicky, Chequerplate gets the balance just right and you feel like you're playing a drum kit and not a circus sideshow.