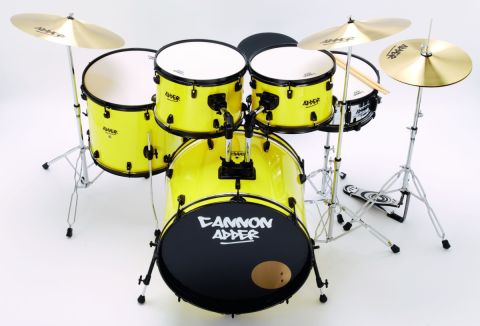 Kits such as the Adder are all about perspective. Any half-serious drummer would find it underwhelming in terms of build quality and tone, but, as mentioned in the review, when judged on its own merits it acquits itself well. It's certainly a better budget kit than what was doing the rounds even five years ago; the full complement of stands, cymbals, bags and silencers is very welcome, and it comes in at a remarkable price.

Starting out as a drummer is never easy. It's also never cheap, but this is something that is being increasingly addressed by brands offering affordable kits. They might not turn in the sonic performance of the high-end Pearls, Yamahas and DWs of the world, but such first-rung-of-the-ladder offerings make things a little easier for the budding but cash-strapped beatmeister.

The heart of the Adder offering is a five-piece kit comprising 12"x8" and 13"x9" rack toms, 16"x16" floor, 22"x16" kick and a 14"x 5½" steel snare. This particular incarnation is clearly targeted at youngsters who crave an OCDP or Spaun-style set but are several grand short of the asking price.

For starters, it's yellow, and the black shell hardware lends the ensemble a very modern aesthetic. Whether this uniform will age gracefully or date quickly, only time will tell, but it's not going to be an issue for the eager teenager with posters of Travis Barker on the wall. As far as they're concerned it looks mint.

Another unusual stylistic feature of the Adder kit is its offset lugs. This is very US-inspired, and whether it's the coolest thing ever on a kit at this price or just a naff affectation might depend on your influences and your age, but it's nice to see something that departs from the same-old same-old bargain basement blueprint.

Aside from the drums themselves, the Cannon cheapie also includes a wealth of hardware and accessories. There's a full complement of metalwork included (cymbal and hi-hat stands, bass drum pedal, etc), but also an 18" ride, 16" crash and 14" hi-hats, a set of drum bags, sticks and (something of a masterstroke) a set of rubber mat-type drum silencers. Parents can breathe a sigh of relief...

Given that it's included in a kit package that sells for £229, one can't expect too much of the hardware that accompanies the Bumblebee Yellow Adder. The bass drum pedal is, as you might predict, a pretty flimsy affair which would warrant replacing quickly if you harbour any ambitions of developing technique above the absolute basics.

The cymbal stands are fitted with rather insubstantial tilters, but all this has to be measured against the low asking price. The stands are double-braced, so they're solid enough for the light use for which the Adder is designed.

The cymbals aren't quite K Customs, but again, let's not set our expectations too high. Ultimately, the Adder provides everything required to start playing with the minimum of fuss, and for that it's to be commended. There's almost no point discussing the tonal nature of the hi-hats, crash and ride (they all sound unsurprisingly clattery and/or gong-like), because that's not the point - they provide metal surfaces to hit, and that's all the prospective Adder purchaser needs.

The remainder of the package - the 'gig' bags and silencers - elicit radically different responses. The bags, while a nice inclusion, are actually a pain to use. They're only marginally bigger than the drums themselves and the string that is employed to do them up (no zips here) catches on every lug and tuning rod, so getting them in and out is a painful process.

We're not sure how often Adder owners would need such bags anyway - most will be happy with the kit more or less permanently installed at home. Still, it's useful to have them for when they might need to go in the back of the car.

Including the silencers as part of the package is a great idea, and it instantly overcomes one of the biggest obstacles to young drummers... There's nothing more frustrating having a kit sat around but only being able to play it for 10 minutes every other Saturday when the neighbours pop to the betting shop. Although the rubber silencers rob the drums of their natural response, it's better to have this compromise rather than not be able to play at all.

The guys at King Midas will probably understand that the focus of this review is more about the features and value of the Adder than the way it sounds. Unlike more expensive offerings, the Adder doesn't try to wow with its acoustic performance - the main reason for its existence is to provide a cheap route into playing drums.

As long as the kit is affordable, doesn't fall apart within a couple of weeks, and includes everything you need, it's a success. If it doesn't sound particularly amazing, well, that's not too big an issue.

The Adder comes with the kind of cheap, thin, white-coated heads that put one in mind of toy drum kits aimed at pre-schoolers. And there's no doubt that a replacement set of even half-decent 'proper' heads would immediately improve the aural appeal of the Adder. As it is, the kit actually doesn't sound completely unusable - the toms are throbby enough when tuned down a bit, and the bass drum (which needs a bit of judicious damping, unsurprisingly), does a decent enough impression of a proper kick, so things aren't too bad.

The snare turned out to be remarkably ok, even with the supplied heads. It's not a patch on snares that cost £150 on their own, but it proved eyebrow-raisingly resistant to the worst harmonic overtones, and could be tuned enough to give an acceptable thwack. And that's more than what's reasonably expected, we reckon...