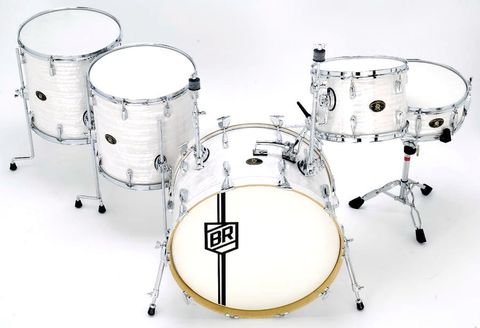 Were Buddy still playing, he'd likely by now be spanking four grand's worth of DW Classics (and giving DW hell for the privilege, no doubt!). All of which is not to say this is a bad set of drums - it most certainly isn't. For the money you'll get yourself a well-made, good-looking kit with rock solid hardware and a dense, warm sound.

The kit sticks faithfully with the sizes Buddy played pretty much throughout his long career. The only unusual item by modern standards is the bass drum, which, at 24"x14", is relatively shallow, reﬂecting the big band era Buddy grew up in.

Buddy mounted his ride and splash cymbals on his bass drum, just like with this new kit, although new hardware is vastly stronger than that available to Buddy. The two cymbal mounts and the vintage-style consolette are superbly made and reliable, while still mimicking Buddy's set-up. As for the ﬂoor tom legs, these are just about the longest we've ever seen. Parts of the hardware are monogrammed with the BR initials.

The 'beavertail' lugs are the same design as those ﬁtted to Buddy's 1940s Slingerland Radio King kit - a restored model with which he was reputedly delighted. The White Marine Pearl is the stripy, oyster-like ﬁnish of the Ludwig kit that Buddy played when he endorsed Ludwig. It's the same material DW uses and, although historically at odds with the Slingerland lugs, it looks great.

The bass drum hoops are also pearl-covered, although they should really be inlaid for the correct look. The bass drum claws, though, are superb. Once again, signiﬁcantly heavier than old fashioned ones and felt-lined to protect the hoops.

So far, so good. But the really important difference between this kit and Buddy's is in the shells. Just as the hardware has been beefed up and modernised, so have the shells. It's like ﬁnding a vintage E-Type Jag with a modern engine stuck under the bonnet where no-one can see it.

The lowdown is this: Buddy spent most of his career playing various kits with ultra-thin three-ply shells of mahogany or maple with thick reinforcing rings. The BR kit's shells, though, are thicker, modern, six- to 10-ply, straight-sided and with no reinforcing rings. This inevitably lends them a more contemporary, brighter sound.

For some drummers this will be a serious turn-off. But if you take the view that time has moved on and this is a tribute, not a replica, you won't be so upset.

On playing, the modernised hardware comes into its own. Vintage consolettes bounced around like ships at sea, but this one, with its massive memory lock, is rock steady, as are the two cymbal arms. Ride cymbal position is restricted, but that's the way Buddy played it.

Heads, top and bottom, are single ply with a dense white coating. They're un-branded Taiwanese, although made from proper Mylar. They tune easily enough and, coupled with the slightly rounded, smooth bearing edges, the tom sound is invitingly rich and warm. A little more open than you get from real vintage kits with their hefty reinforcing rings and completely rounded bearing edges.

The bearing edges here are, at about 30 degrees on toms and kick, noticeably less steep than on most modern drums. This additionally softens the impact a teensy bit, balancing out the brightness of the thickish, straight-sided shells.

Both front and back bass drum heads have BR shield logos. We slipped an old-fashioned felt strip under the batter, with no other damping, allowing the drum to sing. Because of the shell's large diameter and shallow depth you get a 'slam' rather than a 'biff'. The shallow depth also means the response is fast and sensitive.

With both heads intact and tuned quite high to produce a note rather than a thud, you certainly get an authentic big band taste.

The snare is a little less inspiring. The strainer is a generic, pull-away mechanism, solid though not the smoothest, and the cheap snare wires are held by thin plastic straps. Not exactly luxurious.

The response was a bit sluggish right up to medium tension. Only with the batter tuned quite high did we get the expected crisp, full tone - a combination of ringing edges with a reasonably resonant centre. Overall it's a decent enough drum, just not quite commensurate with the world's greatest.

As Buddy fans know, he placed his towel on his second ﬂoor tom and rarely took a stick to it. Fine for him, but rather an extravagance for the average Joe, lumbered with two 16" ﬂoor toms when a 14" or 18" would be more useful. But then it wouldn't be Buddy's set-up...

Buddy always played a top-of-the-range kit, which this is not. So let's not confuse this handsome Taiwanese-built tribute for cash-conscious fans with the sort of kit worthy of the master himself.