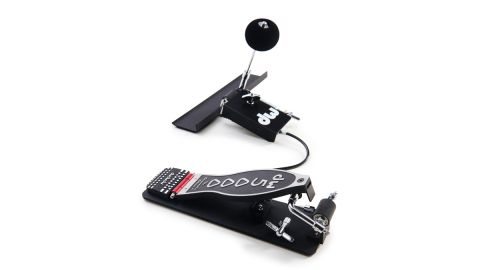 The concept of the cajon pedal is of course nothing new, but Drum Workshop brings its rich pedigree of pedal engineering to the table here to offer a sleek and highly customisable creation.

What some might not realise though, is in addition to the common single and double models, the 5000 can also be found as a side-kick version, heel-less, remote, solid footboard, and now, a cajon model.

The pedalboard and baseplate do not appear to differ at all from the regular 5000 kick pedal except for the obvious lack of cam, beater and spring at the top. These usual components have been replaced by a simple bearing shaft with a square connector at one end (used to attach the cable) and a right-angled swing arm at the other (on which the top of the pedalboard rests). DW has dubbed this the Pivot Drive System.

The other section of the contraption features a large metal plate with a front lip that accommodates the front of the cajon. Attached to this is the highly adjustable Remote Beater Hub, which enables the cajon frontplate to be played by the cajon-specific Gel-Soft Beater Ball.

A steel cable runs from the front of the hub to the pedal which bolts first to a bracket on the baseplate, and then onto the square end of the bearing shaft. A metal plate with a large DW logo covers most of the mechanical elements of the hub, giving a smart finish to the pedal’s overall appearance.

After spending an initial few minutes working out how the two parts were supposed to link together (we’re afraid to say, the instructions were studied in great detail!), the pedal was up and running with no problems. With a bit more tinkering, it was possible to adjust the pedal-board angle, beater position (which can not only be moved forward or back but also left to right) and of course, the spring tension.

As you may expect from DW, the pedal does perform to the expected high standard although it doesn’t hugely outperform similar products from alternative brands, and it seems that some of the £249 pricetag could be for the DW name alone. But that’s not forgetting the included drum key and carry case!