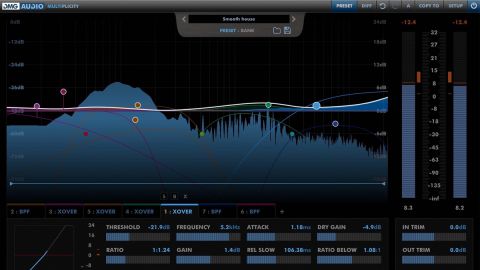 DMG Audio founder and DSP guru Dave Gamble has made it his mission to make 100% in-the-box mastering a genuinely viable proposition, and Multiplicity (VST/AU/AAX) is the latest fruit of that obsession.

A combination of multiband compressor/expander and dynamic EQ, it claims to give a “degree of control that isn’t possible with anything else”.

Bands on the run

Multiplicity has a lot going on within its user interface, but the layout is totally intuitive. The top section houses the curve/response display and makes certain settings graphically interactive; metering and global controls are in the right hand vertical strip; and all the per-band parameters appear in the main tabbed Band Controls section at the bottom.

Up to eight bands are invoked by clicking the + button next to the rightmost tab, which opens a new band and adds it to the display. Every band is set to one of three types when instantiated (although they can be changed at any point): Xover, Pre or Post. A Xover is exactly what you’d expect: a straightforward crossover, dividing the frequencies on either side. The Pre and Post types are dynamic EQ bands, Pre routed before the crossovers, and Post working on the recombined post-crossover signal.

Many compressors and limiters offer processing of the sidechain signal before it hits the detection circuit in order to alter the dynamic response of the effect ‘at source’, but Multiplicity goes considerably further than most in this regard.

First of all, clicking the SC EQ button flips the bottom left panel from showing the transfer curve and dynamic response to hosting the controls of a capable three-band EQ. The low and high bands are switchable between resonant low/high-pass and high/low shelving behaviour, with 6-96dB slopes for the filters and up to +/-24dB gain for the shelves. In between those, the mid band serves as parametric peaking or band-pass filter.

Then it’s on to the pop-out Sidechain panel, wherein up to 50ms of Lookahead can be dialled in to hone transient handling; and the same L/R/ M/S balancing parameters found in the Band Controls, as well as the degree of channel linkage, can be tweaked to tailor the response in terms of stereo behaviour. As for the keying signal, rather ingeniously, the Source menu not only permits selection of the band being processed itself, the wideband signal or an external source as the sidechain, but also the input of any other Xover band.

In Xover mode, a band applies dynamics processing to the input signal within its covered frequency range, like a regular multiband compressor/expander. The upper (or lower for the highest Xover) frequency and roll-off slope are adjusted in the Band Controls or directly in the display, the latter from 6dB/octave to an impressively steep 96dB/octave.

In Pre/Post dynamic EQ mode, dynamics processing is combined with equalisation, targeting very specific frequency ranges within the wideband signal for compression or expansion. You could, for example, use it to surgically cut a harsh hi-hat within a mix only when it exceeds a certain volume level. Eight filter types are available: low-pass, high-pass and band-pass, in regular, steeper Butterworth, and, for band-pass, super-sharp EE modes, plus Flat for broadband processing.

With the exception of Pre/Post’s Q setting, the Band Controls are consistent across all three modes. Threshold sets the volume level above which compression/expansion is applied; Ratio ranges from 1:2 (expansion) to inf:1 (limiting), or 1:inf to -1:1 in Extended mode; and the Ceiling control caps the amount of gain change applied at up to 96dB. Crucially, popping out the Advanced panel reveals equivalent controls for processing the signal below the threshold, too: Ratio Below and Floor. These are accompanied by Deadband, which opens up a range below the Threshold, up to 96dB deep, in which no processing takes place; Dry Gain, for parallel processing; and Shape, which defines the shape of the attack and release curves.

Back in the main Band Controls, the Dyn/Trans control allows processing to be applied only to the ‘transient’ (pre-attack) or ‘dynamic’ (post-attack) parts of the signal, or 100% of one and any percentage of the other. The Attack parameter (0.2-200ms), then, sets the ‘cutoff’ time between the transient and dynamic stages. The Release, meanwhile, switches between two separate timings - Slow (10-2000ms) and Fast (1-2000ms) - depending on whether or not the signal exceeds the RMS level (within the 20-4000ms Release RMS window) by the number of dB specified by the Crest parameter. It’s complicated stuff, for sure, but not as hard to work with as it might sound, and the shaping of dynamic response around transients that it facilitates really is something to behold.

The flexibility continues into the stereo realm, where each band is able to operate in L/R or M/S mode, with free control given over the balance of processing between the two channels.

We’ve never come across a dynamics processor as versatile as Multiplicity. Its unique combination of conventional multiband compression/expansion and dynamic EQ is liberating, affording unrivalled freedom when it comes to detailed shaping of dynamic response in both the time and frequency domains.

Precision and transparency are its two defining traits, with the dual-stage processing, separate Slow/Fast Release and ability to apply compression/expansion independently above and below the threshold pushing the - ahem - envelope of dynamics control even further than the benchmark previously set by its stablemate, Limitless (10/10, 230). And although clearly intended for mastering above all, mix engineers will also find endless uses for it, from transforming drum tracks and sweetening guitars, to potentially rescuing even the most dynamically wayward vocals and indulging in all kinds of sonic experimentation - although high CPU usage means you certainly won’t be running it on every channel and bus.

Multiplicity looks great, too, and boasts a wide array of Global and Instance preferences for customisation of the interface, metering, ballistics and more. More importantly, though, it succeeds in yielding an incredible amount of control without becoming overly intimidating - although total newcomers to audio engineering will, of course, be just as flummoxed by it as they would any other plugin of this type.

DMG Audio may well have scored more 5s in than any other developer, and we have no hesitation in adding Multiplicity to that count. It’s a confident shot across the bows for high-end mastering hardware, and an essential addition to any ITB engineers’s arsenal.