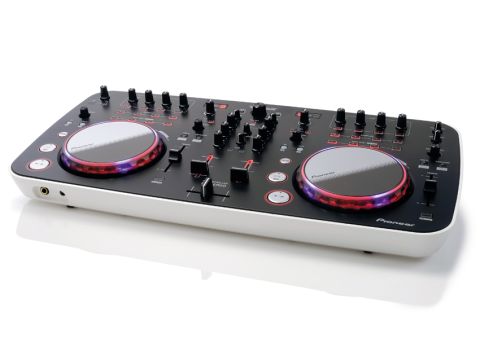 Good looks and features but let down by the bundled software, build and price.

If you've DJ'd in a club, chances are you've used Pioneer equipment.They've been an industry standard for years and although they designed their latest kit to support the growing digital DJ denomination, it wasn't until the Traktor-focussed DDJ-T1 and its Serato sibling the DDJ-S1 arrived that Pioneer aimed a product squarely at controlling another company's software.

When the Kontrol S2 arrived earlier this year, we felt sure Pioneer would respond with a two-deck beauty of their own. And they have - kind of.

In our review of the S2 last issue we said 'the ball is now in [Pioneer's] court to see if they'll attempt to match the S2'. While we were aware of the Ergo, Pioneer are on a mission make it clear that this is not the T1 or S1 cut in half.

This is designed from the ground up, to be compatible with Virtual DJ, of which the LE version is provided and is skinned to the style of the controller.

Aside from everything you'd expect from a two-deck controller, what's interesting on the Ergo is the jog wheels, which feel just like the 350's but also offer very cool visual feedback.

Much like the CDJs, a red LED orbits the jog while it's playing, but once an effect or filter is active, 'Pulse Mode' sends the jog spinning with LEDs and colour, faster depending on the intensity of the effect.

We wish the light show made more sense though - there's no way to really get useful feedback from them, apart from that an effect is active. This is definitely the Ergo's coolest feature, but it'd be much more useful if maybe the lights were brighter, depending on how much of that deck is 'on air'.

It feels like while implementing this trick, Pioneer missed another in making the blue lights genuinely useful. There's no LED metering, but behind the volume fader does pulsate in red when a signal is present.

Round back it's as expected - a stereo balanced TRS output, phono outs, mic and phono inputs with volume control. USB provides all data and power - there is no power supply connection.

The Aux input is one advantage that the Ergo has over the S2, if you put them head to head, though there's no volume control for the second out, if you wanted to use it as a booth output.

The faders and jogs on here feel great but it's really let down by the buttons and knobs. The transport buttons are very loose and click loudly when pressed.

The smaller knobs and buttons such as the cue on/off and mix and volume knobs are horrible to touch and are much too small for a sweaty nightclub setting. In fact, the majority of buttons are small, loose and too indented to provide tactile feedback.

You only have to take one look at Pioneer's promo videos for the Ergo to realise it's not aimed at the club nor is it attempting to compete with their pro line.

The one major advantage it has over the S2 is the switchable desk control - it's possible to control four decks using the C and D Deck buttons. If four-decks is a high priority, but your budget is low, you may be happy with the compromises - do check the Reloop Jockey 3 too.

The Ergo does work with other software. We tried it with Traktor - the feedback was buggy and buttons wouldn't always light up, leaving you confused as to what state an effect is in, for example.

It's hard to recommend over the S2 that comes with the full version of Traktor and works instantly and seamlessly.

If the Ergo came in at £100 less, it'd be a market leader, but as it stands, with an LE version of software and a build quality that doesn't reflect the price, the Ergo feels like a dead end rather than the stepping stone the DDJ-T1 was to the CDJ world.