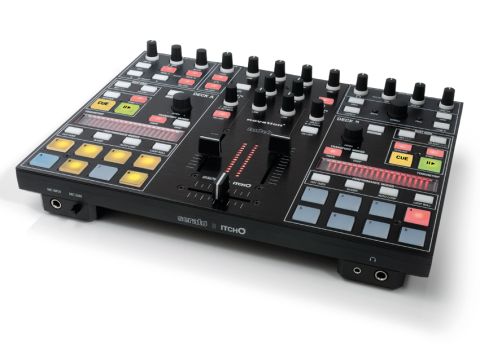 Market leader so far for turntablists keen on converting to the new world of DJ systems.

Future generations of party starters may look back on the turntable with a mixture of patronising fondness and pity, as they deftly whip up a dancefloor by effortlessly dissecting musical waveforms with the flick of a wrist on boxes like the Twitch.

While certainly not the first to leap into the ring with a chair and a whip to take on the turntable, Novation has had the advantage of piggybacking the first wave of controller manufactures.

Like Serato got to see what Final Scratch was about then push past it at the school dance, Novation got to see the ugly sides of the competition before flaunting its wares.

Unlike the NI Kontrol X1 and Maschine, your boy, Twitch, comes with a nifty onboard audio interface, so you can rock it sans decks and mixer. A laptop and a pair of cans is all you need to work out a set, or dick about in your crates.

Wire it up to speakers and you got an instant party. It's the ultimate bit of kit for those plane journeys to gigs, or kick starting an impromptu house party.

It's quick to start shit - the M.O. is loud and clear the moment you get it home from your local DJ supplies store. Out the box it is no harder to fathom than an Easter egg. Remove the packaging, boot the CD and in the time it takes to say 'involuntary spasm' you got yourself a Twitch.

It comes with Serato's Itch 2.0 software as standard, so previous users will be right at home. Plus, Scratch Live heads will be well versed in the interface as well.

The sturdy little unit is about the same size, but half the weight, of a MacBook. Unlike Vestax's VCI-400 or Pioneer's DDJ-ERGO, Novation has shunned trying to master a CDJ style jog wheel approach to controlling.

The Twitch brands itself as the 'touchstrip controller', referring to the swipe strips that help you zig-a-zig the output of each channel. Kind of like tickling KITT's pulsing red light beak from Knightrider.

It's a new way of navigating tracks, and is very sensitive. It also lets you 'pinch' to adjust other parameters, such as loop length. After an afternoon messing about with the bundled WAV scratch sentence (you know, 'ahh, fresh, all the scratching...' collection of cuts) we managed to get somewhere approaching proper scratching.

Then again, we're pretty dope at it anyway, so we wouldn't say just anyone could dive right in and get busy. It does help, however, that in the software settings you can adjust the crossfader's curve so it's about as tight as two coats of paint.

We think most users will probably forego trying to master the crossfader and scratching and plump straight for the upfaders, punch buttons and EFX style of performance - that's what Novation want you to do anyway, or at least that's what this is aimed at.

Digital DJs with a turntable background are best to stay with Scratch Live, or if they fancy plunging into controller world try a Numark NS7, as its motorised control platters won't feel a million miles off what you're used to - but also be prepared to lay down a lot of money for the pleasure.

Each channel on the Twitch has eight banks of reasonably-lit Triggerpads to bounce between Hot Cues, setting loops, rolls and slicing tracks up. Think Dicer.

Thanks to the sweet auto-syncing feature you can load up a track, sync it in time and not worry about fiddling with lining up snares, and instead start remixing on the fly.

Like your Turntablist types, performance is key. With tracks locked in you can loop sections, mix the next track in and assign EFX to the master out, or individual channels faders.

The flanger, echo and delay are a joy to work with. Just lower the channel fader to trigger it. The sound quality is superb and the decay on the echo, for instance, is beautiful, and with modulation and depth fully tweakable you can tailor it to your needs.

Each new advancement in digital DJing needs a few bells and whistles to rise above the competition. Novation is hoping its new Slicer feature will get the right amount of cooing on the forums and message boards.

Select the function and the desired portion of the playing track, and the software will focus in and break it down into evenly spaced cue points. Using the Triggerpads you can re-edit the sequence of events.

Load up a drum break, loop it, Slicer it, and the file is immediately broken down into its component parts. Now bash out a new passage over a running track, playing individual hi-hat, kick and snare hits in any fresh order you like over the top.

With some practice you can re-flip a chorus, glitch up an acapella or just fool with the time signature of a well-known synth line. You don't have to have perfect timing either, it remains on beat, and when you're done it drops back into the running track, like the loop roll does so well.

Although the Twitch is essentially a DJ controller for Serato, it does a mean job of handling Traktor and Ableton, too. The Ableton Live Twitch Translator (available as a free download from the Novation website) syncs you up real nice in Ableton Live, and the company shows it cares about NI peeps by including a neato little overlay to pop on the unit to highlight all the Traktor mapping.

This is not turntables. Bottom line. It doesn't want to be. The bloodline between the two is weak. Controller systems are the future... traditional DJing is getting grey hairs.

Some DJs may have to unlearn what they've learned to get to grips with it, but the rewards are bountiful.

For our money (and it's a steal at under 400 bills - what would a Serato box, two decks and a mixer cost?) the Twitch is the most exciting controller to hit the market for DJs still unsure about the digital world, and is another brave step towards platter-free DJing.