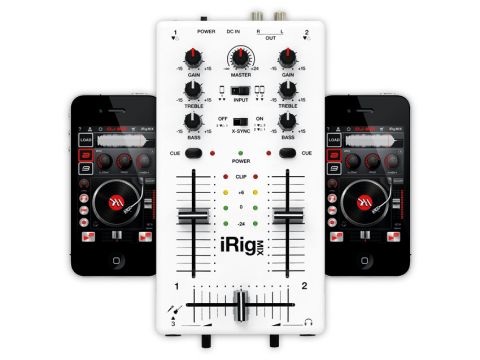 It's portable, powerful and versatile, and ideal for those seeking iOS DJing with dedicated hardware.

It has no dock connector; instead, audio is fed to a pair of stereo mini jacks (to be hooked up to one or two iOS devices). There's a 1/4-inch headphone-out and a 1/4-inch line-in for mic or instrument. A free (to download on theApp Store) version of the DJ Rig software is included, and so that's the version we're focusing on here. However, the full paid version is only £2.99 (with further IAPs).

There are sound FX (only one bank in the free version), rotating the device toggles single-deck display, and there's a nifty automatic filter-mixing mode that mixes out bass or treble during crossfading for authentic one‑finger mixing.

But it's the hardware that shines. You can use one device to mix with two hardware channels, complete with high and low EQ and powerful gain.

There's headphone cueing and all the signals go loud. You can use two iOS devices, with one deck displaying on each.

There's also auto-syncing based on the incoming audio signal, so you could auto-sync using any audio source. It can take about 10 seconds to sync, and works best with loud, clear transients, but itis a pretty awesome feature. Finally, there is amic- or instrument-in, which means you can use the device as an input interface for IK Multimedia's other iOS apps like Amplitube and Vocalive.

One complaint: we'd like to record as WAV or AIFF, not just space-saving M4A.

In an increasingly crowded market, iRig Mix offers a fresh take with some great new features.