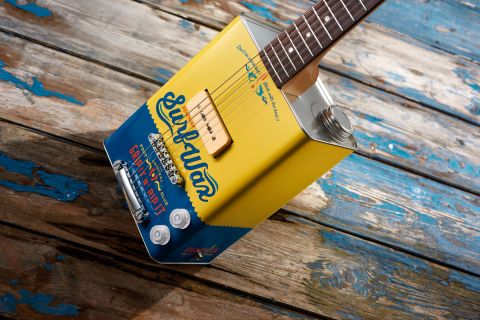 If you’re after a different aesthetic, these Bohemians are the right price to take a punt.

Bohemian Guitars was founded in Johannesburg by brothers Shaun and Adam Lee, inspired by local musicians who would repurpose everyday objects into instruments.

Now based in Atlanta, their seven-strong range of oil can guitars is available in the UK, and all retail at £249. Our ‘Surf Wax’ guitar, like the rest, was designed in Atlanta and made in China.

The structure centres around a slab-sawn maple neck that joins the body at the top 21st fret, then extends into the oil can (made in China - not recycled, by the way). Removing the back plate, we see a piece of 20mm ply that acts as the guitar’s ‘top’, into which screws the extended ‘tenon’ of the neck.

This ply top provides a secure mounting for the tune-o-matic bridge and stud tailpiece, while the soapbar single coil screws into the neck extension. Control is simple via white speed-knobbed volume and tone controls, while the output jack is rather flimsily positioned on the treble side of the can. Four rubber feet sit on the base, so the guitar stands up on its own.

The neck starts at a girth-some 23mm at the 1st fret and gets even fatter, 27.2mm, by the 12th. Shaping is pretty good, aside from a flat spot where the shoulder meets the fingerboard edge - if you like big necks, this will suit. It’s not the straightest fingerboard, although the fretting is tidy enough and a pretty standard string height on the 648mm (25.5-inch) scale makes for a surprisingly conventional player.

The oil can’s unconventional style means it’s not the most ergonomic guitar we’ve ever played. The 120mm body depth is akin to a pretty deep acoustic and takes some getting used to.

One upside is that access to upper frets is exceptional, making high-voiced African-style licks and slide easy. The acoustic response is not as honky, metallic or resonator-like as we’d expected; unplugged, it sounds quite conventional with enough acoustic volume for unamplified practice.

Plugged in, the sound is initially a little weak because the soapbar sits some way from the strings - we added thick foam rubber under the pickup to get it closer to the strings. Also, the nut grooves aren’t cut well, which, along with sloppy tuners, doesn’t help getting or staying in tune.

But it’s worth persevering with these oversights as the sound isn’t bad: the ‘middle position’ placement of the soapbar is well conceived, the sound biting but with depth. Add some crunchy gain and it produces a dirty slide sound and a rootsy, lo-fi blues voice with bags of character and on-the-edge-of-feedback resonance.

If you’re after a different aesthetic, these Bohemians are the right price to take a punt. Yes, you will need to sort the pickup height and nut groove issues, but the playability is good and the funky voice is characterful and unique. Hardly essential, but a very endearing piece. And for each order received, Bohemian plants one tree through its partner, Trees For The Future, demonstrating its commitment to sustainable guitar building.