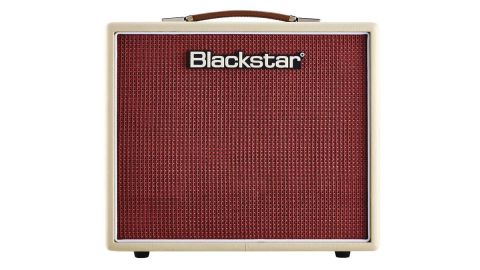 Not only for studios, but also for home, backstage and small gigs, the Studio 10s are great amps producing boutique-quality tone at a very compelling price.

It’s an open secret that some of the biggest guitar tones are often recorded on some of the smallest amplifiers, typically old ‘tweed’-type practice amps using just one output valve, in what’s called a single-ended circuit.

Single-ended amps are pure class A as opposed to output stages that use pairs of valves, typically arranged in a class AB push-pull configuration using either grid or cathode bias. In a single-ended design, the choice of output valve plays a significantly elevated role in defining tone and response, something Blackstar has capitalised on with the all-new Studio 10 amps. Unveiled at this year’s winter NAMM Show, the Studio 10 range features three 1x12 combos, each with a different output valve: the 6L6, EL34 and KT88.

Each amp in the Studio 10 trio has different cosmetics reflecting its very different sonic character. The Studio 10 6L6 is finished in a smart cream vinyl and oxblood speaker grille cloth. Behind the control panels the electronics layout is broadly similar with two high-quality printed circuit boards holding all the components including the valve sockets. All three combos have similar controls, although the circuits behind them have been individually tweaked and optimised for their respective purposes. There’s a single input jack, followed by controls for gain, tone, reverb level and a master volume, with a small button to switch on the overdrive/ boost circuit.

On the bottom panel is a choice of speaker outlets, a series effects loop with a level switch, a speaker-emulated line out and a footswitch jack. The speaker choice, however, is common to all three: the superb Celestion Seventy 80 12-inch. Today, we’re focusing on the aforementioned 6L6. This model has regular treble-cut tone controls. It looks the business, with smart perfectly-proportioned cabinet, robust electronics and Blackstar’s usual high attention to detail.

The 6L6 model has a sugar-sweet clean tone, with extended bass and treble and a sweet, singing high-gain overdrive, making it ideal for fusion as well as jazz and country. The amp has a great ‘in the room’ presence, helped by the extra bass kick that comes from the 12-inch Celestion loudspeaker. It also benefits from exceptionally low electrical noise levels, with a superb digital reverb that goes from subtle ambience to concert hall.

We tried the Studio 10 out with a variety of guitars and had great results with humbuckers and single coils. Having said that, the 6L6’s clean sounds are particularly inspiring with our Seymour Duncan Alnico Pro-powered Strat.The Studio 10’s guitar-friendly dynamics will be familiar to any Blackstar user, with the 6L6 model overdrive based on the brand’s HT-Drive pedal.

Another cool feature is the speaker-emulated line out, which takes its feed after the output stage, retaining the unique character of the amp’s power valve. Recordists take note: you need to use a stereo lead to plug into your desk. You can also plug in a pair of headphones and switch the amps into standby mode for silent practice. The 10-watt power rating is ideal for studio use, allowing the master volumes to be turned up to drive the output valve, though thanks to the 12-inch speaker, there’s enough power to handle rehearsals and smaller gigs, especially in bars and restaurants where space is at a premium.

While it’s great to have all the bells and whistles found on many modern guitar amps, sometimes a simple design with one great sound is all that’s needed. Find the right amp and it can take you in any musical direction. That’s the ethos behind the Studio 10 range: whichever musical genre you aspire to, there’s a good chance one of these compact, portable and immaculately finished combos will be perfect for it - and at what’s a very affordable price point, why stop at one? Not only for studios, but also for home, backstage and small gigs, the Studio 10s are great amps producing boutique-quality tone at a very compelling price.