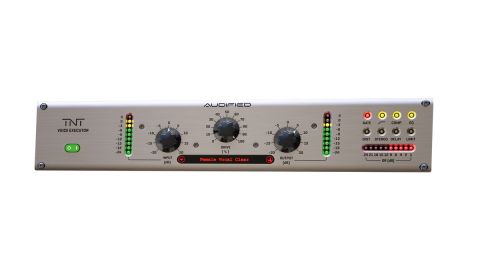 Approach it on its own terms and TNT Vocal Executor is a reliable and effective voice recording fixer-upper, particularly for spoken word. It could do with more presets, though, and the Delay feels unnecessary.

Named after TNT Studios in the Czech Republic, where the algorithm behind it was programmed, TNT Voice Executor (VST/AU/AAX) is a quick-fix, one-stop voice processing plugin that performs its magic behind the scenes, with no input from the user beyond setting levels.

It’s all about the preset library (see Any colour you like), which can’t be edited or added to in any way: you simply load an appropriate preset for the source material and hope for the best, with the three knobs setting the Input and Output levels, and the processing depth (Drive).

You can see which are operational by the yellow lamps that light up (or not) for each one, and the Gate and Limiter lamps turn red when the gate is closed and the limiting threshold is exceeded. And that, apart from the Input, Output and Gain Reduction meters, and menu- accessed Calibration slider, is really all there is to it - you can’t tweak anything except processing depth and input level (the latter having an impact on the action of the Gate, Compressor and Limiter), or even bypass individual modules.

To the skilled engineer, the idea of handing the most sensitive element of the mix over to an automatic plugin like this will be horrifying. But Voice Executor obviously isn’t intended for high-end, mission-critical applications, being very focused in its two remits, the first of which is to give engineers and music producers an instant vocal improver, for situations where time is a factor and the source material isn’t ‘broken’ in the first place.

With Voice Executor defined by its presets, it’s essential that they’re well made and broad in scope. There are 35 in total, divided into four categories - Rap, Vocals, Speech and Special. The eight Vocals presets consist of Clear, Huge, Tight and Delay in Male and Female versions, while Speech does the same with Natural, Tight, Clear, Huge, Shout and Whisper.

About that rather incongruous Delay: it’s primarily employed in the Special category, which contains nine overt effects treatments (heavy distortion, radio speaker simulation, etc), four of them bringing it into play. They’re quite fun but feel a little out of place alongside their more workaday siblings.

The presets are convincingly tuned, sound as you expect them to, and cover a decent amount of ground, but there’s certainly room for more to be added. We don’t like having to go all the way into the menu just to step through them, either - Next and Previous buttons, please.

The second - and we suspect this is where it will find most of its success - is for those working with spoken word and dialogue (podcasters, audiobook publishers, YouTubers, etc) with a fire-and-forget plugin designed to brighten, tighten and generally enlighten vocal recordings with no technical knowledge required.

In both of these scenarios, Voice Executor is surprisingly successful, but it’s particularly adept at the latter - spoken word - where the context of a broader mix isn’t an issue, of course. As long as the voice in question has been captured properly through a semi-decent mic, the chances are that one of the presets will get it to where you want it to be.

For music production... yeah, it pretty much works. You could happily call upon it to quickly sort out a demo vocal, although the inability to adjust compression and EQ parameters in particular means you’ll likely want to go back and replace it with a ‘proper’ effects chain when the record label comes calling.

Overall, we rather like Voice Executor. It’s honest in its ambitions and can be genuinely beneficial in its effect on vocals of all kinds; and the effects at its core sound great. While the total lack of user control will frustrate anyone who knows their way around a channel strip, for landing usable results in a hurry, it’s a very workable solution. Add one to the score for spoken-word usage.