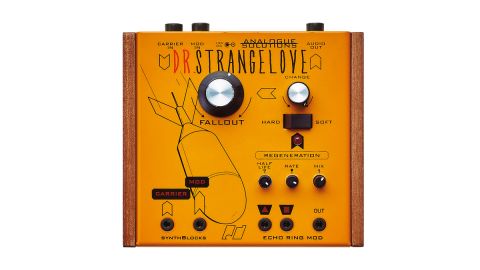 A useful tool that combines two decent-sounding processors in one place. However, the addition of extra patch points and a ring mod ‘wet/dry’ control would have upped its flexibility considerably.

This is the second of Analogue Solutions’ synthBlocks we’re testing, after last month’s Mr Hyde fifilterbox.

Here once again, the core principle is a (largely) analogue signal path, but this time signal mangling takes the form of ring modulation and lo-fifi digital echo.

The ‘mad scientist’ nomenclature is also maintained in the unit’s Dr Strangelove tag (a reference to the ex-Nazi nuclear war adviser in the Kubrick film of the same name), with parameter labels such as Fallout and Half Life following the theme.

A supplied external 12VDC PSU provides power, with rear panel 1/4" jacks employed for the main audio inputs and audio out. The relatively spartan front panel is populated with a switch, five knobs and a series of 3.5mm jack sockets for easier interfacing with modular gear.

Ring Modulation is not a new technique, with origins - like so many electronic components and circuits - in experiments carried out to push the capabilities telecommunications technology.

In circuit terms, ring modulation can be achieved using four diodes in a ring formation (hence the name), though it is easier to understand when thought of as a form of amplitude modulation. In this case, the level of a ‘carrier’ (the audio to be processed) is modulated by another source (the ‘modulator’). The resulting waveform will be derived as both the sum (Modulator plus Carrier) and difference (Modulator minus Carrier) of the input frequencies.

In general terms, if the two inputs are harmonically related, you get a signal that’s harmonically related to both out from the other end; if they’re not, (or if they consist of something more complex than a sine wave), the result will be much more harmonically rich, and possibly dissonant. The beauty of a technique such as this is that adjusting a single parameter can result in a massive change in tone.

The simplest way to use this unit is to plug an audio source into the Carrier In socket, and use the internal LFO as the modulation source. The Fallout knob controls the LFO rate, and Change determines its level (depth). At lower Fallout settings (and with Change pushed-up) a tremolo-like effect is heard. As the Fallout LFO rate gets into the audio range, the sound transforms into classic ring modulation territory, as the carrier is replaced by two ‘sideband’ signals representing those sum and difference frequencies. One major omission is the inability to balance the ring modulated signal with the original via a simple mix control.

The echo works very nicely, and adds movement and additional retro character to the ring-modulated signal. We can’t help thinking that some of the ‘hip’ parameter naming makes things a little confusing, but maybe we’re old-fashioned!

Minijacks along the bottom of the front panel unit provide an alternative way to pass audio through the unit and also allow access to the LFO’s signal as an output. It’s a shame that there’s no way to modulate the echo time other than by hand. CV control of this would have been an excellent addition.