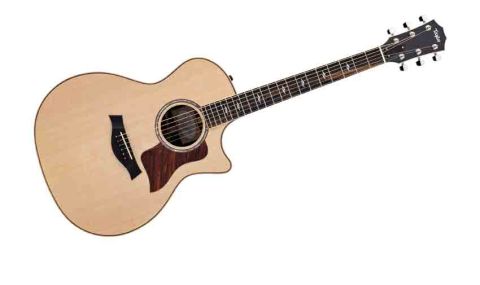 A re-evaluation of the guitar that made Taylor's name, with a redesigned electro system. A new benchmark?

Celebrating 40 years of guitar making this year, Taylor has taken its original 800 series acoustic, redesigned it and added a new pickup system. All change? You bet...

From the very early days of Taylor, innovation has been key to the brand. From the use of modern computer-driven machinery - Taylor's first CNC router was recommended by Tom Anderson - through to UV finishing and, not least, the NT neck joint, which allows a level of consistency and repair, should it be needed, that remains quite unique. Of course, this modernism isn't always welcome in the often rearward-looking guitar world, where 'old is best' is a maxim many players adhere to.

And that's where Andy Powers comes into the story, employed by Taylor a couple of years back to add his considerable luthiery and playing skills to take Taylor forwards. As Bob Taylor has said, he was looking for the impossible when he recruited Powers:

Powers is highly versed in the guitars of yesteryear, and as we've already seen with the 2012 refresh of the 700 series, he's adding a vintage sensibility, not for the sake of it, but to enhance the musicality of the guitars. For 2014, the original Taylor range - the 800 series - receives his considerable input.

There are a raft of cosmetic changes to this year's 800 series. The headstock facing moves from rosewood to jet-black ebony, and is gloss-finished. The binding around the head, fingerboard and body edges is still maple but, by design, plainer and unfigured.

Conversely, the ebony fingerboard, is noticeably streaked, 'smoky' in Taylor- speak, and features new 'Element' inlays - less fancy than the 'diamond-like' inlays of the previous spec. The soundhole rosette still has an abalone centre but is edged inside and out with rosewood, while the actual soundhole gets a maple-bound edge; the edge purfling, too, adds a rosewood line with a thinner black/white stripe. Most noticeably, the pickguard is a diagonally streaked thin piece of rosewood, not tortie-like plastic.

As Andy Powers explains, he aimed to specifically voice each body style to maximise its potential. The top thickness and bracing was re-evaluated and the easily visible offset 'diagonal' back bracing is all part of freeing up the back. Another change is the addition of vertical side struts, presumably to reinforce the side and prevent impact splits.

Overall, there's a noticeable effect on the weight of the guitar - some 300g lighter than our 2012 714ce, and 200g lighter than a 2013, smaller- bodied 812ce. Finally, the hardly thick UV-cured polyester finish has been halved here to approximately 3.5 thousandths of an inch - about the thickness of a piece of copy paper or just over a third of the thickness of your 0.009 first string. Our review sample is mirror flat, too - a superb job.

If that wasn't enough, Taylor's Expression System (ES) has received a complete redesign - moving away from the soundboard and neck-placed magnetic sensors of the original design back to piezos. But, as Taylor's David Hosler explains, the sensors are placed behind the Micarta saddle, not underneath it.

If you look closely behind the saddle, there are three mini-Allen key screws that actually allow you to push the three piezo sensors onto the saddle and 'tune' the sound. We'd advise extreme caution; if you have a problem, ask Taylor to sort it. Interestingly, should the pickup go down, it can be replaced without even slackening the strings.

Aside from those three micro-indicators of the ES 2, Taylor has retained pretty much the same preamp, with its centre-notched volume, treble and bass rotary controls on the upper shoulder; likewise, the same base strap pin/jack socket output, and tray for the single 9V block battery. The internal preamp circuit board still has its red LED indicator and a small slide switch, which, on the ES 1, turned off the body sensor for a different tonality and feedback rejection at higher levels.

Here, as on the piezo undersaddle ES-N system, for example, it acts as a phase switch - again, a good source of feedback rejection, if not all that accessible.

The quoted 44.45mm (1.75- inch) nut width provides ample space for all but the most die-hard fingerstyle players; likewise, Taylor's 56mm saddle spacing is very airy. String height and action are relatively low, and the feel is enhanced by a neck profile with reasonable depth (21.8mm at the first fret), but not too much shoulder.

Part of the reason why the Grand Auditorium (GA) body style is so popular is because it's an all-rounder. Yes, Taylors have a family resemblance sound-wise: brighter or more hi-fi- sounding that an equivalent Martin, or conversely, less muddy with more clarity. But the interesting thing here is that the redesign seems to have subtly changed that character - certainly when compared to our 714ce and 2013 812ce - both spruce/rosewood guitars.

Primarily, it concerns the midrange, which sounds bolder and less 'scooped'. Not least with the new-gauge strings, there's also a little more thickness to the highs, and the guitar feels like it's got more to give, volume-wise. But the new guitar also feels a little more intimate, responding just as well as that old-spec 812ce when played quietly, finger- style. The GA always has plenty of bass, helping it ape a classic dreadnought, but also meaning fingerpicked basslines sound strong.

We relaxed the truss rod a little to just give dropped tunings a little more air and actually, in standard tuning, the resulting subtly higher string height in the main area of the 'board induced a little more fight than the often almost slinky, electric-like playability of a Taylor. The point being, the 814ce is even more versatile than its predecessor.

Plugged in, the first thing you'll notice over the ES 1 is a much stronger output, even when using a balanced TRS cable on the previous system, as recommended: no need for one of those here. The next thing that strikes us is a bolder lower midrange: a thicker sound, less 'polite' than the lower-position sound of the ES 1.

Moving up the fingerboard, the sound we're hearing from the amp sounds more like the guitar, whereas the ES 1 gets progressively more magnetic-sounding. It does have more piezo character, but without the 'quack', the lack of which is especially noticeable on percussive, hard-picked parts.

At volume, it's certainly lively, with plenty of body noise - and unlike the ES 1, you can't turn off the body sensor - there isn't one. Plugging into an LR Baggs Venue DI gives us the chance to, ahem, tailor the sound a little before it hits the PA and here, some subtle thinning of the midrange has good effect, likewise pulling down the presence.

Compared directly to a Fishman system on a Martin dreadnought, although the character of sound is quite different, there's a more natural low end without that 'quack' - the Taylor definitely seems to deal with percussive pick attack better right across the guitar's range, from high-to-low, making it sound more naturally acoustic-like.

There's a lot to evaluate here with the new 814ce: a sea of subtleties, perhaps, that results in really quite a different voice for Taylor's definitive modern cutaway electro-acoustic. The improvements to the acoustic sound of the guitar, to our ears, broaden its versatility - especially for fingerstyle. It doesn't compromise Taylor's renowned clear voice, but does seem to bolster the midrange and thicken up the highs a little. All good.

The ES 2 might seem a radical departure from contemporary piezo pickup design, yet our tests illustrate the differences over the ES 1: it's more conventional, and as a consequence is therefore user-friendly, both for the musician and soundman, especially if you're using other- brand guitars on your gig. And while the more magnetic upper-position character of the ES 1 certainly has its fans, here, the sound is more acoustic-accurate.

The livelier, lighter build could potentially cause some problems at higher volumes on stage, but that's something we'll hopefully be evaluating when we secure one for a Longterm Test. In the meantime, we can only conclude that one of the finest modern electro acoustic guitars has just got better.